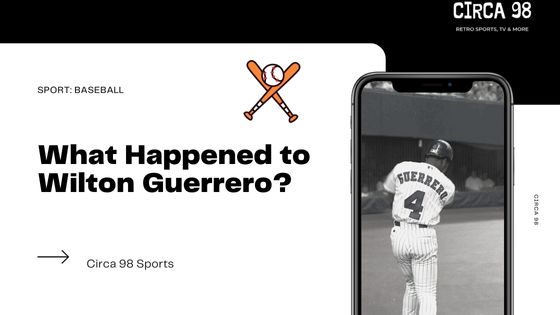 Wilton Guerrero split time between the L.A. Dodgers and Montreal Expos during the 1998 season. The Dodgers traded him with Jonny Tucker, Peter Bergeron, and Ted Lilly to the Expos in exchange for Hiram Bocachica, Mark Grudzielanek, and Carlos Perez.

The trade reunited Wilton with his younger brother Vladimir, who would enjoy a Hall of Fame career.

Statistically, 1998 was a mediocre year for Wilton, though he improved after joining Montreal. His strong performance after the trade would lead to his best Major League season in 1999. In the 98 campaign, Guerrero hit .284/.307/.378 in total but improved his slash line to .284/.313/.410 after joining the Expos.

The elder Guerrero would see time at four different positions in 1998, including 2B, SS, LF, and CF.

What Happened to Wilton Guerrero After 1998?

Wilton enjoyed his best MLB season in 1999, and playing with his brother Vlad seemed to bring out the best in his game. Though Wilton was initially scouted as the superior prospect, it quickly became evident that Vladamir’s power and arm strength would turn him into an All-Star.

Wilton hit .292 over the ’99 season and slugged over .400 for the second time in his career (up to that point). Once again, Guerrero showed defensive versatility by playing both second base and left field.

Things took a turn for the worst for Wilton in 2000 when his OPS dipped to .638. The former second basemen primarily played the outfield in the millennium season, spending time at all three outfield spots, including 13 games in CF.

After the season, Guerrero would elect for Free Agency, allowing him to sign with any other team in the open market.

Guerrero signed with the Cincinnati Reds on January 9th, 2001. Wilton would prove that he was still a big-league talent first by making the Reds’ roster and then enjoying a resurgent season that saw him hit over .330 for the first time in his career.

The former top prospect served primarily as a bench player but returned to shortstop and second base, his natural positions. Though Guerrero only played in 60 games total, he impressed the Reds enough to bring him back the following season.

Guerrero regressed significantly in 2002 and got off to a terrible start with the Reds. Wilton hit only .204 in 59 games before getting traded to Montreal again. The Expos hoped the elder Guerrero could reignite his career by joining his brother Vladamir in a pennant race.

Unfortunately, Wilton was unable to keep his average over .200 for his 44 remaining games of 2002. The regression would force Guerrero into the minor leagues at 27 years old the following season.

Wilton did not play MLB baseball in 2003, though he re-signed with the Cincinnati Reds organization to play AAA for the full season. Wilton hit .277 over 127 games but also stole 30 bases in 39 attempts. He was granted free agency after the AAA season.

Guerrero latched on with the Kansas City Royals organization for the 2004 campaign and turned some heads with a strong AAA performance. Wilton hit .326 and stole 12 bases over a 72-game span, earning him a call-up to the Major League roster.

However, the speedster could not translate his minor-league success to the big leagues and hit just .219 in limited at-bats (32). Despite limited action, Guerrero spent time at every defensive position except RF and C. He was once again granted free agency at the end of the season but would never again play MLB baseball.

Wilton signed with the St. Louis Cardinals with an invitation to spring training. Guerrero failed to crack the big league roster and was sent down to AAA before getting purchased by the White Sox AAA affiliate later on in the season.

Overall, Wilton hit .273 with 3 home runs over a 57-game span. The White Sox would release Guerrero in August 2005, which concluded his professional baseball career.

What Teams did Wilton Guerrero Play For?

Wilton Guerrero played for the Los Angeles Dodgers, Montreal Expos, Cincinnati Reds, and Kansas City Royals. He also spent time as a minor league player in the St. Louis Cardinals and Chicago White Sox’ organizations, though he never played a big-league game for those teams.

Are Wilton and Vladimir Guerrero Related?

Yes, Wilton and Vladimir Guerrero are brothers and played together in two separate stints with the Montreal Expos (1998-2000, 2002). Their cousin, Cristian Guerrero, also played in the minor leagues.

Yes, Wilton is the uncle to Vladamir Guerrero Jr. as well as Gabrial Guerrero. Wilton helped prepare Vlad Jr. for the major leagues by serving as his primary trainer in the Dominican Republic.

Wilton Guerrero serves as the lead trainer at Academia de Beisbol Hermanos Guerrero, where he trains dozens of prospects (including his son Wilton Jr.) for professional baseball careers.