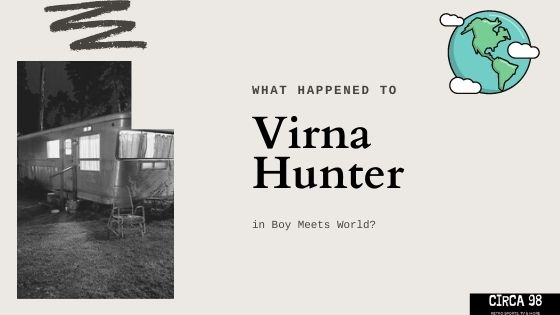 Virna Hunter appeared in Boy Meets World for three episodes during Season 4. During this time, she reunites with her husband Chet and stepson Shawn. Virna had previously fled the trailer park in Season 2, though she never appeared on-screen until the fourth season.

Later in the season, Virna hosts a Thanksgiving dinner for The Matthews’ family. However, the dinner ends in disaster when the highbrow Matthews look down upon The Hunters’ frugal lifestyle.

Virna disappears from the series without explanation during Season 4 and is never mentioned again until the final season. During the Season 7 episode, Family Trees, Virna writes a letter to Shawn detailing her permanent residence in Honduras. After that, we never see or hear from her again.

Who is Virna Hunter?

Virna Hunter is Chet’s wife and Shawn’s stepmother, known primarily for walking out on her family in Season 2 and briefly returning in Season 4.

Despite only appearing in three episodes, Virna is one of the most famous Boy Meets World characters. She is referenced multiple times throughout the series, both before and after her on-screen appearances.

How is Virna Introduced on Boy Meets World?

Viewers first hear about Virna in Season 2, Episode 22: Career Day. Chet attends career day at John Adams High School before telling Shawn that his mother drove their mobile home away. Later in the episode, Chet asks Alan Matthews to look after Shawn while chasing after his wife, Virna.

Viewers first see Virna in Season 4: Episode 4, Fishing For Virna. Shawn tells Cory that he saw his mother at the Trailer V Motel. Later, Chet and Shawn convince Cory to visit Virna so they don’t scare her away. We finally see Virna Hunter on-screen when Cory visits her at the motel.

Virna is Chet’s wife during Seasons 1-4, at least, though we never find out whether they officially divorce. However, we know Virna lived in the trailer park during seasons 1 and 2 and returned in Season 4.

Virna is Shawn’s presumed birth mother for most of the series. However, in Season 7, Episode 12: Family Trees, we learn that Virna did not give birth to Shawn after she writes him a letter explaining as much. As a result, Virna is merely Shawn’s stepmother.

Virna might be Eddie’s birth mother though it’s more likely that they share no blood relation. Because Eddie lived in the same trailer park, it’s also possible that Virna served as his stepmother for a period.

Virna is Jack Hunter’s stepmother though the characters never meet on-screen. We can also assume they never meet off-screen since Jack lived away from the trailer park with his birth mother and stepfather.

Where Does Virna Live on Boy Meets World?

Virna is not Shawn’s birth mother. However, she doesn’t reveal this truth until Chet’s death. After Chet’s funeral, Virna writes a letter to Shawn explaining how she’s permanently moved to Honduras and did not give birth to Shawn. Chet posthumously confirms her story as an apparition.

Virna is not Jack’s mom, nor did she likely ever meet him. However, since she was married to his birth father, she is technically his stepmom. In Season 7, Jack tries to help Shawn find his real mom.

Virna might be Eddie’s mother but probably isn’t. We know that they both lived in the same trailer park though they never appear on-screen together. Likewise, neither character ever references one another.

What is Virna Hunter’s Maiden Name?

Virna’s maiden name is Cordini. We learn this in Season 1, Episode 8: Teacher’s Bet. Cory uses her name to make a point about prejudice in America while attempting to teach the class about Anne Frank.

Virna left during Season 2 to escape Chet Hunter’s lies and deception. She leaves again during Season 4, presumably to visit Honduras, where she would soon reside permanently.

Virna does not die on Boy Meets World and confirms her whereabouts during Season 7 by writing a letter to Shawn. Virna explains that she lives in Honduras, where she plans to live for the rest of her life.