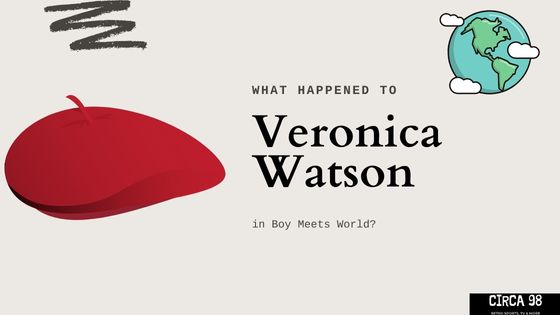 Veronica Watson briefly dates Shawn Hunter during Season 3 of Boy Meets World. Although she only appears in one episode, much of its plot is built around her social status. Unfortunately, while it seems her date with Shawn Hunter went well, she never reappears in the series.

Who is Veronica Watson?

Veronica Watson is a Boy Meets World character that appears during the Season 3 episode, The Double Lie. She is considered one of the most popular students at John Adams High School, where she agrees to a date with Shawn Hunter.

How is Veronica Introduced in Boy Meets World?

The first and only episode featuring Veronica occurs in Season 3, Episode 2, The Double Lie. Her first on-screen appearance happens in the opening scene as Cory and Shawn eagerly watch her dump a student named Dennis.

Next, Shawn quickly pursues her, believing his window of opportunity is narrow, considering Veronica’s immense popularity.

We never learn what happens to Veronica after The Double Lie, but she is never mentioned again throughout the series. It’s clear the writers built the episode’s plot around her presence and had no intention of bringing her back for future episodes.

Who Does Veronica Watson Date in Boy Meets World?

The episode’s premise is that Veronica is one of the most popular girls at John Adams High School, if not the most popular. We know that most of the male students eagerly want to make a date with her. However, we only see her involved with two students, Dennis and Shawn.

The opening scene involves Veronica dumping a guy named Dennis. Unfortunately, we don’t know anything about him other than that he also attends John Adams High School. However, we can assume he is an athlete since he appears to be wearing a Letterman jacket.

Veronica agrees to date Shawn on a Saturday night after dumping her former boyfriend, Dennis. However, Shawn learns he’s supposed to stay at the Matthews’ that night because Mr. Turner is leaving town for a wedding.

Initially, Cory tries to keep his parents out later by anonymously canceling their dinner reservations, but the plan backfires as Amy and Alan return home quicker than expected. As a result, Shawn’s date ends early.

However, Shawn decides to go against Turner’s guidelines and sneaks out to pick up Veronica and bring her to what he believes is Turner’s empty apartment. Shockingly, Shawn and Veronica open the door to find Mr. Turner and a female companion, Kris, making out on his couch.

The ordeal creates a conflict between Shawn and Mr. Turner as they both blatantly lied to each other about their plans for the night. Eventually, they resolve the problem and agree to choose honesty. Ironically, Shawn sneaks Veronica into the apartment on a second occasion, and she hides behind the couch until Mr. Turner realizes what happened.

Erin J. Dean played Veronica Watson on Boy Meets World. Aside from Veronica, she is best known as Robbie Stevenson in The Journey of Allen Strange. Her other credits include Against The Grain, Lolita, and Lover’s Lane. According to IMDB, she retired around 1999-2000 to attend college.