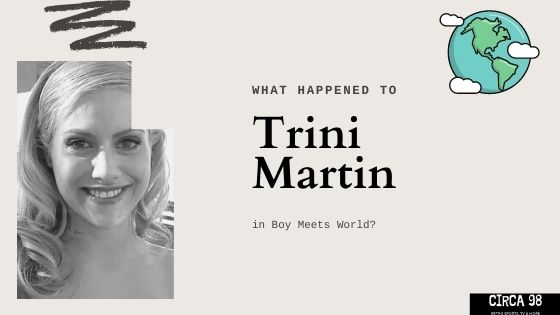 Trini appears in two episodes during Boy Meets World’s third season. Her first appearance comes in the series premiere: My Best Friend’s Girl. Viewers can notice her sitting in the classroom’s front row as Cory awkwardly tries and fails to ask Topanga to be his girlfriend. Trini serves as a crucial part of Shawn and Topanga’s scheme to make Cory jealous. After Eric suggests asking Trini about Shawn and Topanga, Cory obliges and asks her to lunch. After the premiere, we don’t see Trini again until episode nine: The Last Temptation of Cory, which would serve as her final appearance on the series.

Let’s take a look at what happened to Trini in Boy Meets World:

She Plots With Shawn to Make Cory Jealous

After Cory drags his feet, asking Topanga out, Shawn sparks an idea with Topanga and Trini to create urgency for Cory. Then, as a ruse, Shawn asks Topanga out himself and encourages Trini to solicit an invite from Cory, too. Trini succeeds and gets Cory to ask her to the same movie as Shawn and Topanga. When Cory sees Shawn and Topanga kissing, he tries to kiss Trini, who then blows a bubble with her gum to prevent their lips from touching. Ultimately, the plan works because Cory and Topanga get together.

She Asks Cory to Be her Partner for a Class Project

When Topanga stays home sick, Trini asks Cory to be her partner for a class project assigned by Mr. Feeny. Normally, Shawn would partner with Cory, but Feeny insists they split up in this instance. Trini takes the opportunity to ask Cory, as she is without her usual partner, Topanga. However, Cory rebukes her and partners with Missy Robinson as she incessantly flirts with him while Topanga ails sick at home. Trini ends partnering with Mr. Feeny for the project, telling her never to call him at home.

She Brings Topanga Her Classwork

As Cory has lunch with his new partner, Missy, Trini taps him on the shoulder, asking if he’d like to come with her to Topanga’s after school. She presumably asks because Trini is taking Topanga her classwork, as was expected when someone missed a school day during the 90s. Cory ends up going to Topanga’s after Trini had already arrived, much to his dismay. Trini offers to leave so the couple can be alone and jokes that she’ll only stay “another hour” right before exiting.

She Visits Cory When He Gets Sick

In her final series scene, Trini visits Cory after he gets an illness from Topanga, who had previously missed school. Topanga promises to send Cory something that will “have him on his feet,” which turns out to be Trini. As soon as Trini walks through the Matthews’ front door, Cory says that he feels better, an apparent effort to make her leave.

Nobody knows why Trini left Boy Meets World, though we can speculate that she moved away from Philadelphia. Topanga never mentions her outside of two episodes, which seems odd for her best friend. However, Trini was not a series regular, so her disappearance was not a surprise.

Where Did Trini Live on Boy Meets World?

We never learn where Trini lives on Boy Meets World, though it’s apparently within walking distance to Topanga and Cory’s houses. As a result, she visits both of them when they get sick and can’t attend school.

Who Does Trini Date on Boy Meets World?

Trini dates Cory, as a ruse, for one episode. Aside from pretending to date Cory, there’s no reference to Trini’s dating life. We learn that she rarely gets invited to parties for being socially awkward. She describes herself as an outcast and proclaims that nobody “gets” her.

Who are Trini’s Best Friends on Boy Meets World?

Trini only has one genuine friend, which is Topanga. She tells Cory that sometimes she calls Topanga at 3 AM and doesn’t say a word, but that Topanga still knows it’s Trini on the line. So while Cory and Shawn might be considered acquaintances to Trini, it would be reaching to call them her friends.

What is Trini’s Last Name?

Martin is Trini’s last name, as we learn when Mr. Feeny, who typically refers to students as Mr. and Ms., tells Cory that Ms. Martin still has no partner for the class project. At that moment, Cory decides to work with Missy Robinson, who flirts with him.