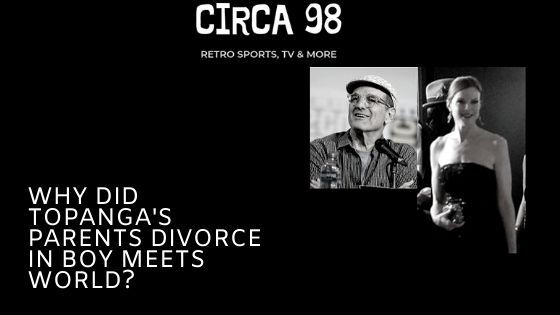 Topanga’s parents get divorced due to irreconcilable differences, including Jedediah’s affair with a woman named Marie. It’s unclear whether an experience occurred before or after the Lawrences’ infamous argument in the Matthews’ living room.

However, the couple could no longer function in public without arguing profusely, much to the embarrassment of their daughter and son-and-law-to-be.

For Boy Meets World fans, one of the more nonsensical storylines involves Topanga’s parent’s divorce, which presumably occurs in Season 7 (though it is never officially announced).

Problems with Jedediah and Rhiannon Lawrence become apparent during the Season 6 finale: State of The Unions, when the couple argues over Jedediah’s mockery of Alan’s Johnny Carson impression and his admiration of the canceled sitcom, ALF.

Topanga soon realizes that the quibble is more than an isolated incident, and Jedediah admits to a pending divorce. Topanga grows so distraught over her parent’s divorce that she calls off her wedding with Cory.

How Does Jedediah Lawrence Contribute to his Divorce?

We learn in Season 7 that Jedediah is the perpetrator of Topanga’s parents’ separation, as he cheated on his wife Rhiannon with another woman. While he fails to outright admit to his extramarital affair, he opts not to deny it when his wife outs him to Cory and Shawn.

It’s clear from the Season 6 finale that Jedediah finds his wife to be condescending and argumentative, and disapproves of her admiration for the TV show Ally McBeal.

How Does Rhiannon Lawrence Contribute to her Divorce?

It becomes clear that Rhiannon is the victim of her marital demise, as she remained faithful to Jedediah despite his transgressions. Some might fault her for scolding her husband for mocking Alan’s Johnny Carson impression or making fun of his admiration for the sitcom ALF.

However, it appears that their divorce was already in motion before the arguments in the Matthews’ living room. However, she is the more mature person and convinces Topanga not to let her divorce ruin her marriage to Cory.

Why do Topanga’s Parents Change Throughout The Series?

Boy Meets World had a habit of lazy casting, which prompted them to use three different actors for Jedediah Lawrence and two for his wife Rhiannon, including different actors portraying the same character in back-to-back seasons (S6, S7).

Jedediah first appears in the Season 2 episode Career Day, when he presents to Cory and Topanga’s 7th-grade class as a Luthier (a guitar maker). He even claims to have recently constructed a guitar for Bruce Springsteen.

The same actor would appear in the following Season (3) to perform live music at Alan and Amy’s anniversary party. The guitar-making hippie he portrayed was a far cry from what he would become by Season 6, in which he projects as an out-of-shape white-collar narcissist.

His wife Rhiannon, in contrast, first appears in the infamous Season 6 finale but is quickly replaced with another actor for Season 7. You might know the most recent actress, Marcia Cross, from Desperate Housewives or Melrose Place.