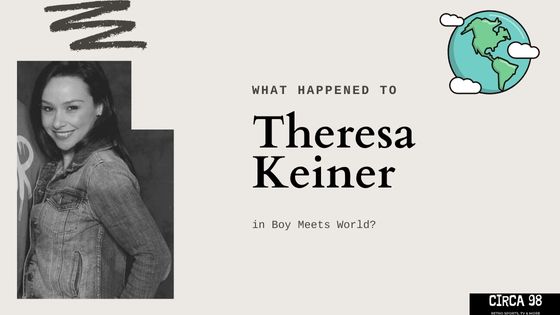 Theresa Keiner, AKA “TK,” appears in one Boy Meets World episode (Sister Theresa) during Season 2 before disappearing for the remainder of the series without explanation. Theresa dates Cory Matthews during her lone appearance, indulging her newfound love interest with excessive gestures like sending flowers and steaks to his residence.

Who is Theresa Keiner?

Theresa Keiner is a Boy Meets World character and the younger sister of Harley Keiner. She appears in Season 2, Episode 10: Sister Theresa, where she dates the show’s principal character, Cory Matthews.

If Theresa’s last name sounds familiar, it’s because she is the younger sibling of one of Season 2’s recurring characters, Harley Keiner. Since Theresa is often referred to by her initials (TK), several John Adams High School students are initially unaware of her relation to Harley, including Cory.

Harley is Theresa’s older brother and primary guardian in a toxic family dynamic. Theresa and Harley’s father is a deadbeat who left her stranded at a Philadelphia Phillies game as a child. As a result, Harley looks after his younger sister and protects her, much like a surrogate father figure.

TK is known for being fast with male students at John Adams High School. When Harley asks a group of students whether or not she’s fast, they all reply with an eager confirmation of his query. Harley then notifies them of his relation to TK, at which point they fearfully scurry.

While TK evidently dates many John Adams High School students, her only known relationship exists with Cory Matthews. Her introduction to Cory occurs when he bumps into her in the school hallways and apologizes profusely.

TK finds his etiquette charming and begins pursuing him aggressively. Theresa showers her new love interest with home deliveries, and the pair attend a drive-in movie for their first date.

Ultimately, Cory grows uncomfortable with her grandiose overtures and fast-moving habits to the point of deciding to cool things off in their relationship. Though Harley eventually respects Cory’s reasoning, TK never reappears in the series to resolve the relationship.

Though Theresa doesn’t think of them as friends, she is protected and attended to by her brother’s lackeys, Frankie Stecchino and Joey Epstein. For example, Frankie serves as her driver for her drive-in movie date.

Frankie, “The Enforcer,” is tasked with chauffeuring and chaperoning TK’s dates, including her drive-in movie outing with Cory Matthews. While TK resents his overprotective behavior, Frankie takes his duty very seriously.

Like Frankie, Joey is expected to protect TK and make her life easy. Joey even stops badgering Cory, who he usually bullies, after he starts a relationship with Theresa.

Since TK only appears in one episode, her last appearance is in the final scene of Season 2, Episode 10. She is having dinner with The Matthews family in their dining room as they consume lobsters she ordered for the special occasion.

Her attendance in Cory’s home suggests their relationship could be ongoing, but she never again appears in the series.

TK’s disappearance from Boy Meets World is never explained, and her relationship with Cory is never resolved. While it’s likely that her character was only intended for a single episode, the presence of her brother Harley in subsequent episodes leaves fans wondering about her whereabouts.

Danielle Harris is the actress who portrayed Theresa, “TK” Keiner, in Boy Meets World. Her other notable credits include multiple films within the Micheal Myers Halloween series, Free Willy, Rosanne, Charmed, and The West Wing.