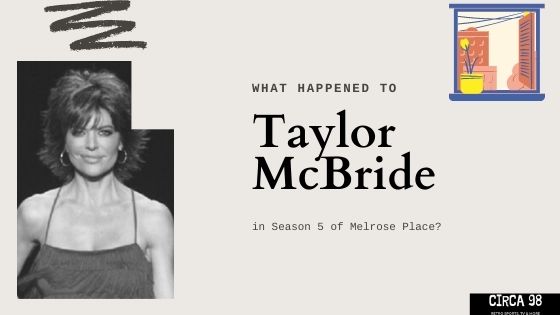 Taylor McBride was first introduced to Melrose Place during Season 5 when she noticed Peter Burns, her estranged brother-in-law, in a newspaper story. Despite living in Boston, she convinces her husband, Kyle McBride, to move out to Los Angeles, where Dr. Burns was on trial for murder. However, once she arrives in L.A., things go haywire as she essentially stalks Peter and moves into his wife’s building. Let’s take a look at what happens to Taylor McBride in Season 5 of Melrose Place.

She Moves to L.A to Stalk Peter Burns

After noticing Peter in a national newspaper story, Taylor decides to move with her husband to Los Angeles to stalk the doctor. But, unbeknownst to her husband, Kyle, Peter is Taylor’s brother-in-law and was previously married to her late sister, Beth. Initially, Taylor acts like she doesn’t know Peter but tries to get acquainted with him as he fails to recognize her from her younger years. Soon enough, however, Taylor reveals herself as Beth’s little sister, much to the shock of Peter.

She Opens a New Restaurant with Kyle

Taylor’s ruse for Kyle’s move to L.A. was convincing him to open another restaurant on the West Coast since they already have a successful one in Boston. She works as the hostess at Kyle’s new restaurant until he throws her out of his apartment. Despite her pending divorce, Taylor can retain part-ownership of the restaurant but can only work on days where Kyle is out.

She Wrecks Peter’s Marriage and Her Own

Because Taylor is a psychopath, she believes she’s in love with her late sister’s ex-husband and does everything possible to start an affair with him. She starts by moving into his wife’s building and becomes his patient at his medical practice. She even crashes Peter and Amanda’s honeymoon, which disgusts Amanda. Her husband Kyle doesn’t suspect anything at first but eventually realizes that something is amiss. Ultimately, Amanda divorces Peter and Kyle divorces Taylor.

She Starts Imitating Her Sister, Beth

In a sick and twisted ordeal, Peter demands that Taylor imitate her late sister, and Peter’s beloved ex-wife, Beth. Though Taylor usually dresses more provocatively than her sister, she starts dressing more conservatively as part of the game. Peter even buys her clothes and demands that she wear whatever he selects. As a result, the relationship becomes abusive both physically and psychologically.

She Conspires to Frame Peter for Domestic Assualt

Taylor conspires with Micheal Mancini to frame Peter for domestic assault. Her motives are different from Micheals’, who wants to replace Peter as Chief of Staff at Wilshire Memorial. Taylor, however, believes that Peter loves her more when he’s struggling in his career. Eventually, the duo drugs Peter and bangs his fists against a glass table to make it look like he struck Taylor. Michael comes up with the idea after one of his patients has violent epilepsy incidents, which he can’t remember.

She Gets Left At The Altar

In a deranged turn of events, Peter agrees to marry Taylor, though he considers killing her before the ceremony. Ultimately, he leaves her at the altar, as he never planned to go through with the sham marriage in the first place. Taylor is devastated by his actions because she was delusional enough to believe that he was actually going to marry her.

More About Taylor McBride in Season 5

Where Does Taylor Live in Melrose Place?

Taylor moves into the Melrose Place apartment complex but gets thrown out after cheating on her husband with Peter. She eventually moves into Peter’s condo by the beach until he leaves her at the altar.

Who Does Taylor Date in Melrose Place?

Until their divorce, Taylor dates her husband, Kyle, but simultaneously dates her former brother-in-law, Peter Burns. After her separation, Taylor exclusively dates Dr. Burns until he dumps her at her wedding ceremony.

Who are Taylor’s Best Friends in Melrose Place?

Taylor doesn’t have many friends since most people suspect her of being a manipulative and condescending person. However, she does grow friendly with Peter until she reveals her identity as Beth’s sister, making Peter wonder about her mental health. By the end of Season 5, she has no friends.