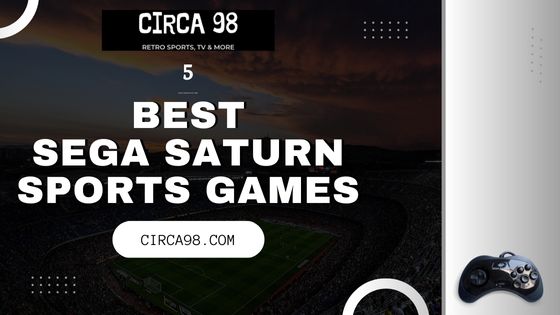 If you had Sega Saturn, you know that finding quality sports games was not as simple as it was on other consoles like PlayStation and Dreamcast. However, there are some hidden gems in the Sega Saturn sports library.

In fact, the late Mac Miller once rapped, “playing Sega Saturn; I ball like Jamal Mashburn.”

Today we are going to rank the top 5 Sega Saturn sports games:

World Series Baseball 98 is quite arguably the greatest baseball video game of its era. Not only is it the best sports game for Sega Saturn, but it is also one of the better sports games of the 90s for any console.

It wasn’t until EA Sports transitioned from Triple Play to the MVP Baseball series in the mid-2000s that WS 98 was knocked off the crown for best baseball game ever. Still, WS 98 remains on the Mount Rushmore of baseball video games and is only available for Sega Saturn & Genisis.

Not every Sega Saturn owner is a traditional sports lover. For those less inclined to play basketball, baseball, or football, DecAthlete presents an exciting, arcade-style alternative.

The theme is Track & Field, and players can choose from various events, including the long jump, hurdles, pole vault, shot put, javelin throw, and various races. The game was received with generally positive reviews upon its release, but like all Saturn games, it has aged graphically.

The NBA 2K series is seen as an industry juggernaut, but did you know that Visual Concepts’ first-ever basketball video game was NBA Action 98? It shows the foundation of what would later become the greatest basketball series in video game history and is now part of modern basketball culture.

While games from the ’90s have aged, NBA Action 98 is fun and playable for its era. Best yet, it sports Kobe Bryant on the cover when he was a young pup in the league. The game was often compared to NBA Live 98.

The peak of Sega Saturn hockey games both graphically and literally. This was part of the Sega Sports imprint, which also released every other game on this list (World Series 98 & NBA Action 98, etc.) within the same year.

Just like XBOX went on to have its signature sports games like NHL Rivals and NBA Inside Drive, so to did Sega Saturn with their games from 1998. One fun fact about this game is that it includes Olympic teams, which makes for some good retro gaming.

The WorldWide Soccer series is the console’s most highly regarded European football game. And who published it? That’s right, you guessed it; Sega Sports. They ran the gamut of sports games with their 1998 titles.

Worldwide Soccer includes commentary from Jack Charlton, a former player, and manager who serves as the color commentator to Jack Bloom. The gameplay itself was considered excellent at the time and is still enjoyable if you can get past the aged graphics (though they were considered advanced by the late 90s standards).

Madden 98 for Sega Saturn is a fun game. In fact, the game was essentially ported to Nintendo 64 with slight graphic updates to create the infamous Madden 64. I can tell you from experience that playing with the Raiders and 49ers is enjoyable.

Throwing deep to James Jett or JJ Stokes was always thrilling. The quality of the game that aged the worst was the sound. After every snap, it makes a squishing sound presumably meant to emulate line jockeying. It’s annoying.