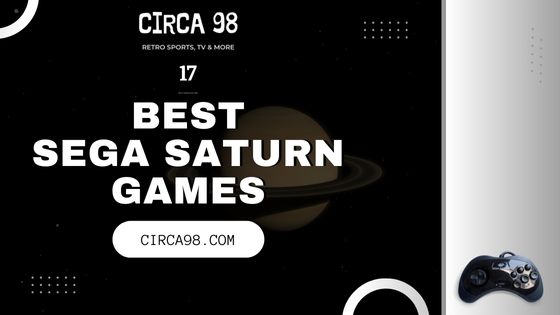 Ranking the best Sega Saturn games is not an easy task. Many Sega Saturn players consider themselves cult followers of the mid-90s console. As a result, they have strong opinions about which games rank the highest.

Another ranking consideration requires assessing how well Sega Saturn games hold up in 2022. For example, a game considered elite in the mid-90s may not hold up to the modern gamer. Below, Circa 98 ranks the best Sega Saturn games (updated for 2022 gamers).

Sega Saturn purists often rank Panzar Dragoon #1 in their best all-time games for any console. Part of its allure comes from the fact that it’s one of Sega Saturn’s final releases. While its release came in 1998, the graphics have aged noticeably as of 2022. However, the gameplay, story, and combat make up for the title’s graphical deficiencies.

While its popularity has ascended over the years, its initial release produced low sales and engagement mainly because Sega had already shifted its focus to the Sega Dreamcast. Nevertheless, purists noticed the fantastic gameplay from the jump and curated its cult following. In 2022, the series continued with Panzer Dragoon Orta for Xbox.

Good luck finding a copy of Panzar Dragoon Saga in 2022. If you do get lucky enough to locate the game, it may cost you upwards of $1,000 to purchase. However, the title’s scarcity has only added to its appeal and entrenched it further into Sega Saturn folklore.

Although this title was only released in Japan, it’s one of the greatest fighting games in console history and still holds up in 2022. While many gamers revere the Marvel vs. Capcom series, this title pre-dates and arguably outperforms it. For example, gamers can create all-star teams and utilize super combos in their fighting regime.

In 2022, X-Men vs. Street Fighter still plays excellent for the modern gamer. The animations are timeless, and the gameplay is smooth and seamless. Part of its ease stems from the Sega Saturn’s well-designed controller, which was crafted specifically for fighting games like this. For an even better experience, use the Action Replay card with ram.

Nights is perhaps the most famous character for Sega Saturn, and Nights Into Dreams is its signature title. Created by The Sonic Team of the infamous Sonic The Hedgehog series, Nights Into Dreams provides similarly addictive gameplay. Gamers collect orbs to raise their scores while encountering enemies along the way.

In 2008, the game was re-released in Japan for Playstation 2 with superior graphics. However, despite the upgrade, the Sega Saturn version still holds up in 2022, and gamers will find themselves addicted to the gameplay the same way players were back in 1996. Despite its excellent gameplay, the game is very challenging to beat.

For RPG enthusiasts, Dragon Force is the best the Sega Saturn console has to offer. The player competes for territory against various nations in an effort to control an entire continent. The depth of the game’s logic is notable as gamers must appease generals, plan invasions, and defend bases. As a result, Dragon Force is not simply mindless entertainment.

One of Dragon Force’s most innovative features is its on-screen battles. Unfortunately, most 90s RPGs lack sufficient visual elements when simulating combat. Luckily, Dragon Force sets the highest standard for the genre with visually impressive on-screen clashes. While not every gamer likes RPGs, those who do will find great satisfaction in Dragon Force.

When it comes to Sega Saturn Sports games, NHL Hockey is the best of the best. In a twist of irony, the game is actually a sequel to NHL PowerPlay 96, which chose not to release the ’98 version on Sega Saturn. As a result, Sega Sports stepped in to re-brand the game as its own, and the beneficiaries are Sega Saturn players until this day.

NHL Hockey’s gameplay is outstanding as it made incremental improvements to the NHL Powerplay 96 engine while adding visual enhancements via menus, loading screens, and graphics. Furthermore, the goal accouncer is tremendous and one of the best of its video game era.

Players can choose from exhibition, season, and playoff modes to diversify their gaming experience. Perhaps, best of all, the 6player multi-pad adapter allows eight local players to play the game at once.

A few sticklers cite the framerate as worse than its 1996 predecessor. Still, any difference is negligible and not enough to reduce its overall improvement.

Guardian Heros is an RPG-Fighter hybrid that forms its own genre. Characters clash over battlefields while developing new abilities to utilize during battle. The depth of the character development far exceeds a typical “beat ’em up” game for consoles of the 1990s.

Aside from the innovative genre, Guardian Heros also features an elaborate plot featuring character interaction and impressive dialogue. The game’s pace may be slower than modern gamers prefer, but strategists will still enjoy this title in 2022. Furthermore, the graphics are fantastic and still look excellent 28 years after its initial release.

Virtua Fighter 2 is perhaps the most impressive Sega Saturn game from a graphics standpoint. At the time of its 1995 release, the graphic quality and the entire visual presentation were astonishingly good. Gamers were pleasantly surprised with this revelation after the original Virtua Fighter presented some issues for Sega Genesis and Sega Saturn.

As for its gameplay, Virtua Fighter 2 is relatively easy to pick up as a beginner. Of course, mastering the different fighting combinations takes time, but the general playability is very welcoming for newcomers.

Shining Force III is an RPG game for Sega Saturn. It features an outstanding soundtrack to accompany an open-world format that modern gamers covet. In addition, the game’s storyline impresses gamers of all skill levels and ages.

However, Shining Force III has one drawback for modern gamers; the graphics don’t quite hold up to 2022 standards. Nevertheless, despite its clear graphical limitations, the animations are on-point, smooth, and noteworthy.

Furthermore, the missions are comparable to modern games and will likely keep gamers engaged enough to overlook the graphics. Developed by Camelot Software, the Shining Force series has continued through current consoles with Shining Resonance Refrain.

Bomberman is a well-known video game franchise featuring games on consoles spanning from NES to Playstation 3. Since its 1983 inception, the Bomberman series has produced over 50 games for consoles, PC, and handheld devices. Despite its extensive library of games, the best of all is Saturn Bomberman for Sega Saturn.

Using a multiplayer adapter, 10 local players can play Saturn Bomberman simultaneously, a feat unrivaled by any other Bomberman console game. Aside from its usability, the gameplay, graphics, and stages are top-notch and hold up well into 2022.

One of World Series ’98’s most innovative features is the inclusion of a minor league farm system. Although the divisions are split by A, AA, and AAA, including minor league prospects, the season mode is far more appealing than any previously released baseball video game. For example, you could call up Rey Ordonez to the Mets in Season mode.

As for gameplay, the hitting, pitching, and fielding are all on-point. The double-plays are smooth, the pitch sequences are realistic, and the hitting is strategic. The announcers are also very good for the era of sports video games which often featured annoying audio concepts.

Despite its Japan-exclusive release, Radiant Silvergun is generally considered the best shooting game for Sega Saturn. Players have various weapons to choose including blades, homing projectiles, and spread guns.

Because of its vertical-scrolling presentation, Radiant Silvergun is very playable for all skill levels. However, it stands out among similar games because of its platforming elements throughout the various stages.

The game’s plot is set in 2520 when scientists reveal a massive crystal aboard a spaceship that summons enemy strikes. Fighter pilots fly through the atmosphere in an attempt to save Earth from the relentless enemy attacks.

Virtua Cop is an entertaining Sega Saturn game with an exclusive adapter so players can enjoy its unique arcade-style gameplay. The graphics are outstanding and closely emulate a MAME arcade-style presentation. As a result, the real-time polygonal graphics are excellent.

In addition, Virtua Cop for Sega Saturn features an array of animations that diversify the gaming experience. For example, targets react differently based on their point of attack. Furthermore, striking civilians cost gamers a point, adding to an action-packed and cerebral engine.

In many respects, Virtua Cop innovated arcade-style games for consoles and went on to release multiple sequels, including Virtua Cop Elite Edition for Playstation 2. For most Sega Saturn games, Virtua Cop is a must-buy.

Manx TT Superbike is another outstanding arcade-style game for Sega Saturn. The game is set on The Isle of Man bike track near Great Britain and provides an intriguing combo of arcade style and realism. Gamers compete against rival bikers and time when performing in high-stakes races.

Manx TT’s graphics are quite good and hold up well in 2022. The terrain, bikes, and scenery prove a suitable landscape for gamers. Furthermore, the tracks feature different surfaces, topography, landscapes, and buildings. Gamers can swap between first and 3rd-person views.

In addition, the 2-player split-screen mode costs the gamers nothing visually while enhancing the local gaming experience. The title’s controls are incredibly user-friendly, with acceleration, brakes, and steering controls. As a result, most gamers will love this release.

Despite its reputation as Virtua Fighter’s inferior step-brother, Fighting Vipers is actually quite good. Unfortunately, the storyline lacks depth, and the characters are creatively limited. Nonetheless, the gameplay itself is impressive for its era. Furthermore, the framerate is consistently excellent, and the game looks great visually.

If gamers can look beyond the subpar cast and trivial storyline, the game itself is fun to play. In 2022, gamers may be pleasantly surprised by the quality of play, framerate, and overall visual presentation of Fighting Vipers. Sega Saturn enthusiasts should not miss adding this title to their retro collection.

C-Men Children of Atom is an outstanding game but may cause burn-out for players. However, the animations are excellent and smooth, and the characters look strikingly similar to their cartoon depictions. Furthermore, the in-game fighting is on-par with any game of its era.

While this title was released on both Sega Saturn and Sony Playstation, the Saturn version is clearly superior. While Sony clearly took over the market share as the gaming world shifted to 3D, the residual 2D titles typically performed better on Saturn, as was the case with X-Men COTA.

Despite its relative anonymity in the United States, Last Bronx was another excellent fighting game for Sega Saturn. Like Fighting Vipers, the game tried to capture the attention of Virtua Fighter enthusiasts.

Though it failed to really make noise at its release, the game was good.

As an arcade port, the Sega Saturn version held its own as part of its forgotten string of 32-bit releases. The high-res mode combined with solid audio-visual specs made the release quite enjoyable for gamers.

The gameplay keeps fighters on their toes while spurring engagement.

Based on the infamous Bruce Willis Film, Die Hard Arcade is a Sega Saturn must-have. The 3D beat ’em up style game shows its age in 2022, but the gameplay remains enjoyable and nostalgic for 90s kids.

The gameplay allows users to punch or kick enemies and collect a wide-ranging list of weapons, including fire extinguishers, brooms, rocket launchers, grandfather clocks, and more.

Another arcade port, Saturn was initially the only console to enjoy this title. However, PS2 later re-released the game in Japan and eventually added it to the PSN library in 2012.