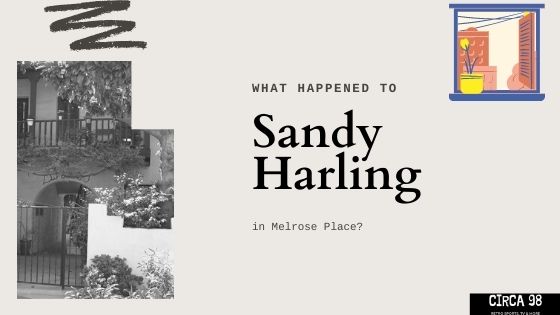 Sandy Louise Harling didn’t finish the first season of Melrose Place after the character landed an acting role in a popular soap opera. The aspiring actress hoped to get her break, which seemed to come even earlier in the season but fell through for other reasons. Before leaving Melrose Place, Sandy made her imprint on the series by playing gatekeeper for Jake and serving as the top bartender at Shooters. Let’s take a closer look at what happened to Sandy on Melrose Place.

She Plays Gatekeeper for Jake Hanson

Sandy and Jake have a dating history with one another, and one that Sandy resents. As a result, Sandy likes to monitor Jake’s dating life and occasionally mocks him for fun. One example is when Kelly Taylor of Beverly Hills 90210 comes knocking on Jake’s apartment door, and Sandy explains that he’s not home. She warns Kelly repeatedly about the dangers of getting involved with a heartbreaker like Mr. Hanson.

She Flirts With Steve Sanders to Meet his Mother

Sandy flirts with Steve Sanders after he shows up at Shooter’s to protect Kelly in an early season one episode. When she learns that his mother is Samantha Sanders of the Heartly House, she agrees to come to his house to meet her. We don’t know if the meeting ever took place, but we do know that she sees Steve again by the Melrose Place pool. The high schooler invites her to a Beverly Hills Beach Club party, which she declines.

She Loses Her Movie Role After Being Forced to Expose Herself

When Sandy lands a small part in a horror film, she thinks she’s made it big in Hollywood. But, shortly after, she embarrasses her friends when they try to throw a celebration party at her apartment. Sandy doesn’t want to appear eager about landing such a small role as a new actress and fears the casting director (who is her date for later that night) will walk in on the celebration. Rhonda takes particular issue with her roommate’s disrespectful behavior and calls her out directly.

Later, the problem turns moot when the movie director asks Sandy to remove her top (which was not in the initial script), and Sandy moves on from the role. The aspiring actress was unwilling to sacrifice her dignity to make it in Hollywood.

She Gets Stalked by Some Guy Named Paul

Sandy agrees to an impromptu date with a guy named Paul, who flirts with her through a store window as she shops for hats with Rhonda. When the date goes terribly, Sandy tries to let him down easily without hurting his feelings. However, Paul doesn’t get the message and shows up at her apartment the next day, bringing her flowers from his nursery. When she rebuffs him for a second time, he starts acting even more strangely.

Finally, Jake and others listen to Sandy and start taking Paul for what he is, a deranged and abusive stalker. Jake goes to the nursery to beat the dirt out of Paul, who subsequently presses charges. Sandy confronts Paul one final time at the nursery, urging him to drop the charges against Jake, which he ultimately does.

After Jake takes care of Paul by beating him up, Sandy grows more attached and wants to try dating Jake again. This time though, Sandy hopes his courtship will be more traditional and will initially remain abstinent. Things seem to be going great after Jake takes Sandy out on an actual date, but everything falls apart when Jake starts kissing her aggressively inside his apartment. Sandy puts a stop to it and scolds Jake for being singularly minded. Sandy concludes that things will never work out between them.

She Moves to New York for an Acting Role

A New York-based casting director approaches Sandy at Shooters, asking her to audition on Forever & Tomorrow, a popular soap opera. At first, Sandy thinks the guy is lying about his job and wants a date. However, we find out later that he’s really a casting director, and Sandy flies out to New York to read for the part. Soon after, Rhonda tells everyone that Sandy got the part and would start filming right away. Rhonda ships Sandy’s belongings to New York, where she now lives permanently.

Why Did Sandy Leave Melrose Place?

Sandy left Melrose Place because she landed a role on the famous Soap Opera; Forever & Tomorrow, filmed in New York. Rhonda ships her things to New York, which would serve as her new home, on the opposite coast from her friends.

Where Did Sandy Live on Melrose Place?

Sandy lived in one of the upstairs apartments with her roommate, Rhonda. The Melrose Place complex served Sandy well as she laid out by the pool in the mornings while most of her neighbors were at work. Later on, she moves to New York.

Who Does Sandy Date on Melrose Place?

Sandy dates Jake on and off and forms a friendship with him, too. However, ultimately they decide to be only friends after their dating struggles. Aside from Jake, Sandy briefly dates Steve Sanders from Beverly Hills 90210, though it was more of an innocent flirtation. Finally, Sandy dates a maniac stalker named Paul, who follows her, threatens her, and breaks into her apartment.

Who are Sandy’s Best Friends on Melrose Place?

Sandy’s best friends are Rhonda, Jane, and Jake, but she gets closer to Alison before moving away to New York. Rhonda’s friendship is apparent since the two friends are also roommates, while her friendship with Jake stems from a previous relationship. Jane is friends with everyone, and they grow closer when Sandy accompanies her to the clinic.