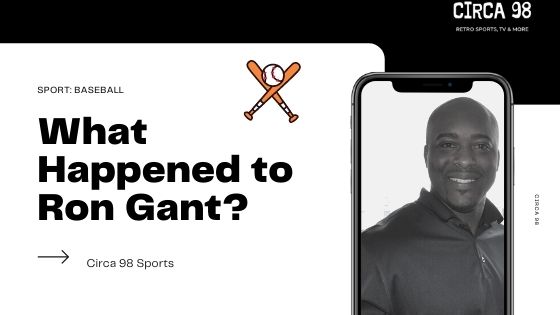 Ron Gant spent the 1998 season with the St. Louis Cardinals, where he hit .240 with 26 HRs and 67 RBIs. Overall, Gant enjoyed a productive season, finishing the year with a .825 OPS. However, the ’98 season would be Gant’s third and final season as a member of the Cardinals roster, as they traded him to the Phillies after the season. The Cardinals, as a team, finished in 3rd place in the NL Central at 83-79, though First Basemen Mark McGwire broke Roger Maris’ single-season home run record by hitting 70 long balls.

1998 was something of a bounce-back campaign for Gant, who, though once highly regarded, suffered through an abysmal season in 1997 where he slashed .229/.310/.388 over 562 plate appearances. Aside from Gant’s return to form as a hitter, the veteran also played solid defense in Left Field, his exclusive position. A respected baserunner, Gant stole eight bases in 1998 without getting caught. Gant typically batted 5th or 6th in the lineup, featuring Delino Deshields, Ray Lankford, Mark McGwire, and Brian Jordan.

What Happened to Ron Gant After 1998?

Gant’s first Phillies season was successful as he batted .260 with 17 HRs, 77 RBIs, and 13 SBs. However, his team failed to make the postseason, and at age 34, Gant’s defense remained adequate but below his peak form. In addition, Gant once again batted in the middle of the order, typically 5th.

Gant produced for the Phillies in the first half of 2000, but the team dealt him at the trading deadline after falling out of the playoff race. Before the trade, Gant hit .254 with 20 HRs and 38 RBIs, but his average dipped after joining Anaheim post-deadline. Still, Gant served as a valuable power hitter and raised his OPS to .891 in 34 games. Despite his acquisition, Anaehiem failed to make the postseason.

Gant joined the Colorado Rockies as a free agent for one-year/$1.75 million. The slugger hit .257 with 8 HRs before the Rockies traded him, once again, this time to Oakland, where he would play in his first postseason since 1996. Gant hit .259 with 3 HRs for Oakland during the regular season, but his team lost 3-2 in the Divisional Series to the Yankees. Ron hit one home run in the series but only went 2 for 11 in total.

Gant signed a one-year/ $500,000 contract with San Diego before the 2002 season in which he hit .262 with 18 HRs and 59 RBIs. It was an impressive campaign for Gant, who, at 37 years old, proved he could still produce at the big league level. Gant played most of his games in LF and appeared in 5 games in RF and one in CF. However, the Padres failed to perform, finishing 66-96 for 5th in the NL West.

In his final season, Gant latched on with one of his former teams, the Oakland Athletics, where he hit .146 with 1 HR and 4 RBIs in 17 games. Unfortunately, the A’s released Gant on June 4th, 2003, effectively ending his MLB career. The slugger finished his career with over 300 HRs and over 1,000 RBIs over 16 MLB seasons, where he played all three outfield positions along with 2B and 3B, which he played earlier in his career with the Braves.

What Teams Did Ron Gant Play For?

What Positions Did Ron Gant Play?

As a rookie, Gant played 2B for the Atlanta Braves. He went on to play 3B, LF, CF, and RF as well. After his time with Atlanta, Gant served primarily as a Left Fielder and Designated Hitter. All together, Gant played 2B, 3B, LF, CF, RF, and DH.

Ron Gant lives in the Atlanta area, where he occasionally works as a broadcaster. Gant had been an MLB Network contributor in previous years, though he no longer appears on the station. Instead, Gant stays connected to the Atlanta Braves organization through various channels.