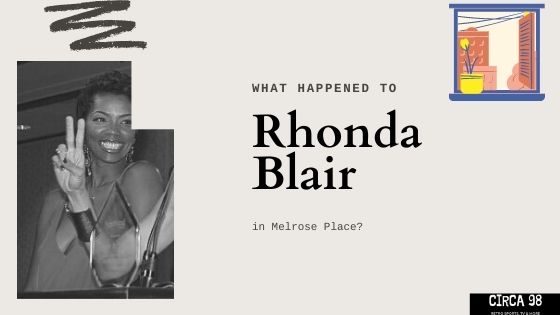 Who is Rhonda Blair?

Rhonda is one of the original Melrose Place characters who lives in the apartment complex with her roommate Sandy Harling. Rhonda works as an aerobics instructor, teaching classes like Cardio Funk. She moves away from Melrose Place after Season One with her newlywed husband, Terrance Haggard.

How is Rhonda First Introduced on Melrose Place?

After Alison realizes that her roommate skipped out on the rent, Rhonda comes down from her second-story apartment to tell Alison that she saw the whole thing. Alison questions why Rhonda didn’t intervene; however, Ms. Blair fails to provide a logical explanation.

Who Does Rhonda Date on Melrose Place?

Daniel meets Rhonda in an aerobics class and finesses his way into a dinner date. At first, Rhonda seems excited, but things turn for the worst when she realizes his motives. Daniel attempts to get Rhonda involved in a pyramid scheme selling a vitamin product called The Source to her aerobics clients. Daniel explains that Rhonda would get 30% of each sale, allowing her to make good money as an influencer. Naturally, Rhonda harshly declines, at which point Daniel ends the date abruptly.

Rhonda’s soon-to-be husband, Terrance Haggard, first runs into her at the farmer’s market when Rhonda mistakenly takes the wrong box of strawberries for Matt’s halfway house. Terrance confronts Rhonda aggressively, and the two argue profusely about the strawberries.

Once Matt realizes he misplaced the other box, Rhonda gives back Terrance’s strawberries, though she remains angry about his outburst. Ultimately, Terrance apologizes for his behavior and asks Rhonda if he can make it up by taking her to dinner. Rhonda reluctantly accepts, which leads her down the path of eventual marriage.

Who Are Rhonda’s Best Friends on Melrose Place?

Matt and Rhonda are best friends and mostly inseparable throughout Season One. They bond over their differences from the other tenants, who don’t face as much scrutiny in L.A. Matt and Rhonda often commiserate over failed dates and often go out together to different events. While Rhonda sometimes annoys Matt, like when she backs out of cooking for his halfway house function, they always makeup and remain friends. When Rhonda moves away after Season One, Matt struggles with finding a new best friend.

Rhonda and Sandy naturally spend time together as roommates, though each gets on the other’s nerves regularly. For example, Sandy borrows Rhonda’s clothes without her permission. In addition, their work schedules are opposites as Rhonda wakes up early to teach aerobics and Sandy works late nights as a bartender at Shooters. Despite the contentiousness, the roommates remain friends up until Sandy’s move to New York.

Rhonda spends a lot of time with Jane, who is probably the friendliest tenant at the complex. While Micheal works late nights at the hospital, leaving Jane all alone, Rhonda convinces her to come out for a night on the town. When two men ask them to a club, Jane reluctantly accepts at Rhonda’s behest. Unfortunately, Jane loses her wedding ring, though Sandy finds it at Shooters and returns it the next day. Rhonda almost breaks up Jane’s marriage by accidentally revealing her pregnancy and appointment at an abortion clinic. Jane and Michael work things out, though they eventually divorce for other reasons.

1) She Rejects a Salesmen From Her Aerobics Class

After taking her aerobics class, Daniel asks Rhonda on a date. She agrees reluctantly, as she doesn’t usually date her clients but finds him attractive enough to break the rule. Unfortunately, she learns that his motive for the date was financial, as he tries to pitch her on selling a vitamin product called The Source to cardio funk clients (like an early 90’s version of an influencer). When Rhonda rebukes him harshly, Daniel ends the night early. Rhonda is, of course, appalled and hurt by his actions.

When Jane first gets pregnant, she withholds the news from her husband, Micheal. She becomes even more hesitant when Michael talks about not wanting kids for another five years. Some of her neighbors learn of her pregnancy, including Rhonda when she gets sick after smelling fish. Jane makes an appointment with a health clinic as she considers her options. When Rhonda drops off comfort food to her apartment, Micheal answers the door, and Rhonda foolishly reveals her friend’s secret. As it turns out, Jane doesn’t go through with an abortion and forgives Rhonda quickly.

3) She Auditions for a Major Dance Company

We learn during Season One that Rhonda was formerly considered a dance prodigy before settling in as an Aerobics instructor. When her friend, Theresa, arrives in town while on tour with her dance company, we learn more about Rhonda’s past. When Ms. Blair takes Matt to see Theresa’s show, we discover that Theresa essentially replaced Rhonda as the lead dancer. Rhonda faked an ankle sprain during the initial auditions, allowing her then-protege, Theresa, to replace her. When a new opportunity arises, Rhonda decides to audition to prove she can handle the pressure. Rhonda declines the job after determining that traveling for dance is not her ideal lifestyle.

4) She Kicks Out Her OCD Roommate Carrie

When Rhonda places an ad for a new roommate, a young woman named Carrie applies in person. At first, Carrie seems like a great fit since she’s around the same age and has a promising career as a personal organizer. However, Rhonda soon learns her career choice stems from severe obsessive-compulsive disorder, which compels her to do things like rearranging Rhonda’s closet without her consent. Ultimately, Rhonda tells Carrie to move out, though the two meet again in a later episode.

5) She Proposes to Terrance

After breaking off her initial engagement with Terrance, Rhonda has a change of heart (likely because the writers were not going to renew the character for Season Two). She takes Terrance to a Chinese restaurant, where she plans to propose via a timely fortune cookie placed on the couple’s table. However, the restaurant screws up the plan by serving the wrong fortune cookie, which upsets her. When Terrance asks what’s wrong, she comes out and proposes, to which he eagerly accepts.