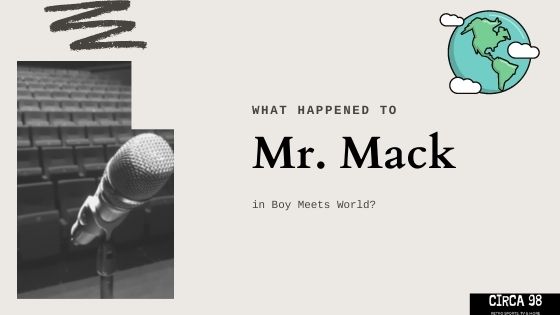 In the Season 4 episode, Cult Fiction, Mr. Mack lures Shawn Hunter to his cult, The Centre, for misguided youth. Then, after accompanying Shawn to the hospital following Mr. Turner’s bike accident, Mack gets into a nearly physical confrontation with Alan Matthews. However, Mr. Mack leaves the hospital alone when Shawn finally rebukes him.

Who is Philip Mack?

Philip Mack, aka, Mr. Mack is a cult leader at The Centre. Like many cult leaders from the 90s, Mack targets young adults struggling to find an identity. Despite only appearing in one episode, Mr. Mack lives in infamy as one of the most famous Boy Meets World characters.

When Does Mr. Mack First Appear in Boy Meets World?

Mr. Mack only appears in one episode, Season 4, Episode 25: Cult Fiction. Mack initially appears on-screen inside The Centre, where Sherri brings Shawn for initiation. Mack comes across as non-threatening but uses Shawn’s name several times in his conversation.

We see several dozen students at The Centre during Cult Fiction. However, we only learn two members’ names because they recruit Shawn Hunter and Eric Matthews. Of course, Eric’s interest in The Centre is disingenuous, and Mr. Mack rebukes him with prejudice. Take a look at the known members:

Alicia greets Eric at The Centre when he drops by with Cory. We don’t learn much about her besides that she welcomes people, including, Eric with a hug. Alicia is responsible for prompting Eric to join The Centre, though Mr. Mack throws him out for his dishonest motives.

Sherri’s Centre membership pre-dates the episode, as she is the one who convinces Shawn to join. However, after overhearing Mr. Turner challenge Shawn about his college plans, Sherri twists Turner’s words into judgments and hostile intentions. Shortly after the argument, Sherri takes Shawn to meet Philip Mack.

Shawn joins The Centre after his schoolmate, Sherri, overhears Mr. Turner criticizing Shawn for lacking direction. Mr. Mack convinces Shawn that such criticisms are judgments and only harm him as a person. Initially, Shawn finds the idea of living at The Centre insane but quickly warms to the concept.

Philip Mack abides by several principles for The Centre. While his guidelines are typical of a cult-like atmosphere, the leader laughs at the notion that his youth center is a cult. Take a look at some of the central principles of Mr. Mack’s Centre.

“The length of a journey has nothing to do with its ultimate value.”

“Nobody judges who you are or where you come from, everyone here is the same.”

What Episode is Mr. Mack Appear in?

Philip Mack Appears in the Boy Meets World Episode: Cult Fiction which occurs in Season 4. Philip has a significant role in the episode as he appears at The Centre and in the hospital after Turner’s motorcycle accident. Following this episode, we never see Philip Mack again.

When Did Mr. Mack Open The Centre?

We don’t know precisely when Philip Mack opened The Centre, but we know it was years before Shawn Hunter’s involvement. Mr. Feeny alludes to trying to shut it down for years.

Alan threatens to kill Mr. Mack at the hospital, noting that he’s not one of Mack’s gullible little kids. However, Amy points out that Mack would love a lawsuit, at which point Alan opts not to kill the cult leader. But, of course, Alan wasn’t planning to murder him but attempted to dissuade him from targeting Shawn Hunter.

Why Can’t Cory Go In The Celebrity Room?

After Cory drops by The Centre to investigate Shawn’s new cult, he asks Mr. Mack if he can go into a particular room with a star on the door. Of course, Philip Mack says no because it’s the celebrity room.

After processing his answer, Cory tells Shawn that Mr. Mack is the slickest guy he’s ever seen. The irony is that Mack’s Centre is all about inclusivity, but it demonstrates exclusivity by having a celebrity room.