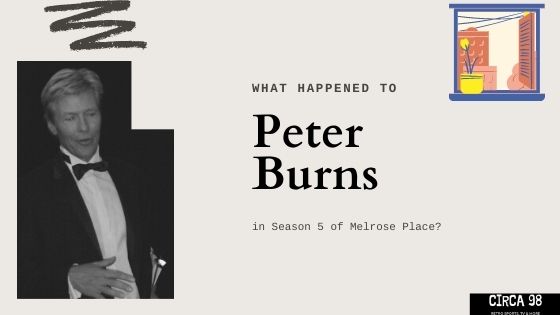 Season 5 was eventful for Dr. Peter Burns, who was first introduced in the previous Melrose Place season. After getting released from prison with the help of his new wife, Amanda Woodward, Dr. Burns is surprised when his ex-wife’s sister shows up in Los Angeles. Things get even stranger when she moves into Amanda’s apartment complex and begins stalking Peter. When Amanda grows preoccupied with her career at D&D Advertising, Peter gets involved in a deranged relationship with Taylor. Let’s review what happens to Peter Burns in Season 5.

Peter is finally granted his release from prison when Kimberly remembers their second waiter on the night in question, who could subsequently serve as his alibi. However, despite his release, police learn of his previous murder charge when he participated in the assisted suicide of his ex-wife Beth, who was dealing with terminal cancer at the time of her death. He was cleared after a journal entry revealed Beth’s wishes to end her life. We later learn that Beth’s sister Taylor forged the entry herself.

Detectives learn that Doctor Burns had a previous identity (Peter Howell) and life in Missouri. After skipping town to avoid the total weight of the law, he forged his present identity, Peter Burns. Unbeknownst to Peter, the chargers were dropped after he left town as authorities found his ex-wife’s diary revealing admission of suicide. As stated above, we later learn Taylor forged her sister’s diary entry to clear Peter’s name.

He Gets The Yips After His Patient Passes Away

Peter briefly loses his ability to perform surgery after one of his patients dies. Although there was no evidence that he caused the patient’s death, it creates a mental block known as the yips. The next time Peter goes to perform a surgical incision, he freezes and leaves the room. Luckily for Dr. Burns, he quickly gains back his confidence and can continue performing surgeries.

He Aspires to Become a Golf Pro

As things deteriorate in his career and marriage, Peter entertains the idea of becoming a professional golfer. He plans to look into joining the Pro tour after winning some bets at his local golf club. However, his confidence wanes after Kyle McBride hustles him out of $1,500 in a friendly golf wager. As a result, he forgets all about his golfing career and starts scheming to become Chief of Staff at Wilshire Memorial.

He Temporarily Becomes Chief of Staff at Wilshire Memorial

Peter blackmails his way into the Chief of Staff position after learning that the head of the selection committee, Dr. Schulman, chose a candidate based on their romantic involvement. Since the candidate was married, Peter threatens to go public if he’s not made Chief of Staff. While Schulman agrees, Michael senses something suspicious and makes a power play himself, resulting in Peter losing the position once again.

Amanda Divorces Him for Various Reasons

Amanda first grows tired of Peter’s antics, including slacking off at work, playing too much golf, and forming a relationship with Taylor. She throws him out after he shows up at one of her meetings acting belligerent. Although neither party finalizes the divorce, initially, Amanda does so when she learns that Peter’s relationship with Taylor became physical.

More About Dr. Burns in Season 5

Where Does Peter Live on Melrose Place?

Peter initially lives with his wife Amanda in her unit at the Melrose Place complex until she throws him out. Then, after briefly staying with Michael and Kimberly at their beach house, he moves into a beach condominium.

Who Does Peter Date on Melrose Place?

Peter initially dates his wife Amanda but starts dating Taylor before his divorce. Unfortunately, his relationship with Taylor grows deranged, and he leaves her at the altar of her sham ceremony.

Who are Peter’s Best Friends on Melrose Place?

At first, Peter grows close with Kyle and spends a lot of time at his restaurant. However, Kyle gets sick of Dr. Burns when he notices his wife obsessing over him. Kyle also hustles Peter out of $1,500 on the golf course, adding to their tensions. Aside from Kyle, Peter is close with Michael, with whom he runs a private practice.