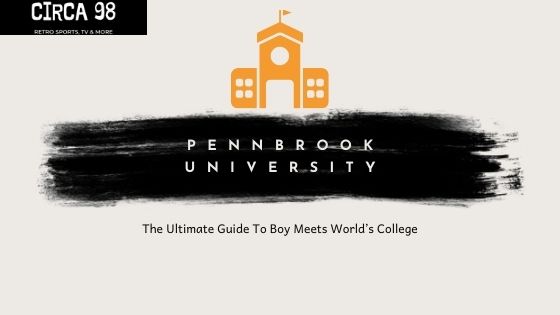 In addition to several of the show’s personas attending the college as students, George Feeny serves as a professor at the University starting in Season 6. He goes on to marry Pennbrook University’s Dean: Ms. Lila Bolander.

Pennbrook University is fictional and, therefore, not real. In other words, Boy Meets World’s writers did not use a real college within their storylines. However, within the show’s universe, Pennbrook is very real.

As an ode to the show’s cultural impact, Mr. Feeny’s professor profile exists on RateMyProfessor.com, where he scores 4.8/5, with 97% of students willing to retake one of his courses.

Dean Bolander teaches Developmental Psychology in addition to serving as the Dean. George Feeny initially takes her class as a student, but she hires him after demonstrating professor-like tendencies.

George Feeny initially enrolls at Pennbrook as a student but finds his teaching instincts overwhelming in a classroom setting. As a result, Dean Bolander hires Mr. Feeny to serve as a professor.

Stuart is a young and relatable professor who briefly teaches at Pennbrook University. Unfortunately, he is dismissed with cause after he sexually harrases a female student, Topanga Lawrence, in her dorm.

Professor Michaels teaches Philosophy at Pennbrook University. Though Shawn is still in high school, he takes Professor Michaels’ course to impress a college girl and ends up thriving with the material.

Boy Meets World’s main character attends Pennbrook with his best friend and girlfriend, both ideals he strived for his entire life. Initially, Cory signs up for the wrong courses and tries to quit school.

Shawn ends up on the waiting list after applying to Pennbrook but gets admitted after Cory dissuades several applicants from enrolling. He is lukewarm about college initially, but Cory convinces him to attend.

Topanga turns down Yale to attend Pennbrook University with her boyfriend and fiance, Cory Matthews. Her decision to pass up an Ivy League institution causes controversy throughout the series.

Angela attends Pennbrook University with her then-boyfriend Shawn Hunter though they break up soon after freshman orientation. Ultimately, Angela and Shawn reunite until Angela leaves for good.

After failing to get into college after his senior year of high school, Eric retakes the SATs and improves his score enough for Pennbrook admission. He moves into an off-campus apartment with Jack Hunter.

Jack travels to the Philadelphia area to attend Pennbrook University, prompting him to seek a roommate for his off-campus apartment. He agrees to live with Eric Matthews and is soon joined by his estranged half-brother, Shawn.

Rachel follows her boyfriend to Pennbrook U, only to break up with him shortly after. As a result, Rachel moves in with Jack and Eric, who evict Shawn without notice. Rachel also briefly serves as a resident advisor.

Topanga and Angela live in the McKay dorms, as stated by Stuart in Season 6, Episode 7: Everybody Loves Stuart. The professor visits the dorms to review a paper with Topanga before hitting on her inappropriately.

Shawn and Cory presumably live in these dorms, too, as each of the four characters shares the same co-ed bathroom. Cory initially finds the idea of a co-ed bathroom intimidating but warms up to it after Angela forces him inside.

Rachel serves as a resident advisor for Brittany Hall during the latter part of Season 7. Angela also briefly rooms with her in the same dorm. Shawn infamously parks in her space, prompting the infamous war.

Cory and Topanga move into the married dorms after returning from their honeymoon. At first, the newlyweds try to return to Cory’s original dorm room but find it occupied by Eric and Jack.

Jack and Eric brag about having sent a letter to the University President detailing Cory’s marriage, thus prohibiting him from non-married dorms. However, when a married dorm room opens up, Cory and Topanga find it dirty, pest-infested and damaged plumbing.

Ultimately, Cory fixes the place up after some pushback from his father and Shawn. When we see the married dorm room in subsequent episodes, it appears much more well-kept and high-quality.

Where is Pennbrook University Located?

Pennbrook University is located in Philadelphia, PA, though its precise location is never confirmed. We know that the campus is within a reasonable distance from John Adams High School, as Shawn is able to live in an off-campus apartment while still attending high school.

What is the Pennbrook University Mascot?

The Pennbrook University mascot is a penguin. During the Season 7 episode No Such Thing as a Sure Thing, Cory takes over as a mascot after a rival Amish student infiltrated Pennbrook by wearing the costume.

When is Pennbrook University First Mentioned?

Eric mentions Pennbrook in Season 4 Episode 20: Security Guy. He wakes up Mr. Feeny in the middle of the night to go over college options, and Pennbrook is the first school he mentions. George replies that it’s an excellent school.

Which Dorm Room Do Cory and Shawn Live?

Cory and Shawn live in room 368 during Freshman year. Cory tries to move back to the room after his honeymoon but finds it occupied by Eric and Jack.