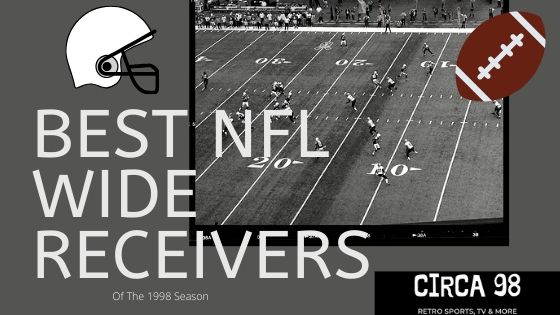 It’s rare that a rookie makes such a great impact on his team or the entire league, but that’s exactly what Randy Moss did in 1998. After dropping in the draft due to “character concerns,” Moss lit the NFL up in his inaugural campaign. He caught 69 passes for 1313 yards and an NFL-leading 17 touchdowns.

Moss’s blazing speed and ridiculous athleticism poured fear into opposing secondaries and captured the imagination of fans. The 21-year-old played opposite of Hall of Fame Chris Carter and caught passes from Randall Cunningham. He helped lead the Vikings to a 15-1 record before losing to Atlanta in the NFC Conference Championship.

Like Moss, Freeman enjoyed a dominant season and was named First-Team All-Pro while being selected to his first and only Pro Bowl. Antonio led all receivers with 1424 receiving yards and 94.9 receiving yards per game.

Freeman caught 84 passes over 15 games before catching 4 more in the Packer’s Wild Card loss to San Francisco. The 26-year-old played opposite of speedster Robert Brooks while catching passes from Hall of Famer Brett Favre. Freeman would never again enjoy the level of success he displayed in 1998.

Keyshawn Johnson entered his 3rd NFL season with something to prove after being selected 1st overall in 1996. Though Johnson showed promise in his first two campaigns, he had yet to live up to his billing as a top pick.

1998 put doubts about Keyshawn’s ability to rest as he caught 83 passes for 1131 yards and 10 touchdowns. The 26-year-old was known as a possession receiver and solidified himself as a go-to guy for first downs and touchdowns.

Johnson played opposite Wayne Chrebet and caught passes from Vinny Testaverde. The trio helped lead New York to their first winning season in years, going 12-4 under the tutelage of Bill Parcells. The Jets would lose the AFC Championship to Denver.

Before getting his reputation as a difficult teammate, T.O. showed out for the 49ers alongside Jerry Rice and J.J. Stokes. While being part of a ridiculously talented receiving core certainly helped him get open, his athleticism and physicality were clearly generational. Owens caught 67 passes for 1097 yards and 14 TDs during the 1998 campaign.

Catching passes from Steve Young was another distinct advantage for T.O., but the ease with which he sliced through secondaries was nobody’s credit but his own.

The 49ers ended up 12-4 before losing to Atlanta in the NFC Divisional Round. Their Wild Card win over Green Bay will go down as Owens’ defining moment as he caught the game-winner between two DBs, known as The Catch II among 49ers fans.

Eric Moulds could have been higher on this list after catching 67 passes for 1368 yards and 9 TDs. If he were surrounded by the talent that Johnson and Owens were, he likely would have been #2 on the list.

The reality, however, is that he played with inferior quarterbacks in Doug Flutie and Rob Johnson. Even so, Moulds helped lead the Bills to a 10-6 season and a playoff berth before losing to Miami in the AFC Wild Card game.

Rod Smith was one of the unheralded receivers of the 90s. Denver won 2 super bowls during this era (including 1998), and Smith was a big reason why. Although RB Terrell Davis (1998 MVP) and QB John Elway (Future HOF) got the most publicity for Denver’s Super Bowl runs, Smith was as important as either of them.

During 1998, Smith caught 86 passes for 1226 yards and 6 TDs. His running mate Ed McCaffrey was no slouch either, as they formed one of the most reliable receiving duos in recent league history. Denver went 14-2 and won the Super Bowl convincingly.

Although Jimmy Smith’s best NFL season would come the following year, 1998 was a sign of what was to come. Smith caught 78 passes for 1132 yards and 8 touchdowns. He was recognized for his performance with a Pro Bowl selection.

The 29-year-old helped lead Jacksonville to a 12-4 record and an AFC Wild Card win over New England. The Jags would lose to New York in the Divisional Round. Smith caught passes from Mark Brunell while lining up opposite to Keenan McCardell, another excellent WR.

Many would call Jerry Rice the greatest receiver ever (his career stats help this argument). Though Rice was well past his prime at age 36, the 98 season proved that he was still a top-10 receiver.

Having played in only 2 games the previous year, many wondered if Rice was simply done. His 82 receptions and 1157 yards helped put that to rest, as did his 9 receiving touchdowns.

Playing alongside Terrell Owens (#4 on this list) and J.J. Stokes certainly helped his cause, as did his repour with Hall of Fame QB Steve Young.

We later learned that Rice wasn’t even close to retirement, as he played 6 additional seasons.

McDuffie led all receivers with 90 receptions during the 1998 campaign. The 29-year-old accumulated 1050 yards and 7 TDs to further bolster his resume. It was clearly O.J.’s best career season, as he never before or again reached 1000 receiving yards.

McDuffie helped the Dolphins to a 10-6 record and playoff berth before losing to Denver in the AFC Divisional Round. O.J had the fortune of catching passes from Hall of Famer Dan Marino while being flanked by Oronde Gadsden.

McCaffrey was selected to the Pro Bowl instead of his teammate Smith despite Smith having more receptions and yards in 98. It was Ed’s first and only Pro Bowl selection. Some argue that McCaffrey separated himself with double-digit touchdowns, which is why he was selected.

Ed enjoyed the same luxury as his teammate Smith in catching passes from John Elway.

Excluding the NFC champion, Atlanta Falcons receivers from the top 10 was not easy. But the tandem of Terrance Mathis and Tony Martin is the clear choice for our dynamic duo award of 1998.

Each player was over 30 at the time, which made their performance all the more impressive. Neither player was a stranger to great seasons, with Mathis catching 111 passes in 1994 (his first season with Atlanta) and Martin catching 90 in 1995 (with San Diego).

Neither receiver was rewarded with a Pro Bowl in 1998, possibly because they canceled each other out in the eyes of the voters. They caught passes from Chris Chandler.

Hall of Famer Cris Carter would enjoy another Pro Bowl season in 1998, his 6th consecutive (at the time). Energized by the arrival of rookie sensation Randy Moss, Carter took advantage of the open spaces by catching 78 passes for 1011 yards and 12 touchdowns.

Like Moss, Carter caught receptions from Randall Cunningham on their way to a 15-1 record before losing to our aforementioned Atlanta Falcons in the NFC Championship.

In 1998, The Raiders’ #2 WR James Jett was 3rd in Yards Per Reception and 2nd in 6th in Yards Per Target. The 28-year-old also had 6 touchdowns which boosted him over runner-up Shawn Jefferson.

Jett’s longest reception in 1998 was 75 yards as he caught his passes from cannon-armed Jeff George, along with Donald Hollas and Wade Wilson. Jett lined up alongside legendary WR Tim Brown, who also had a productive year for Oakland.