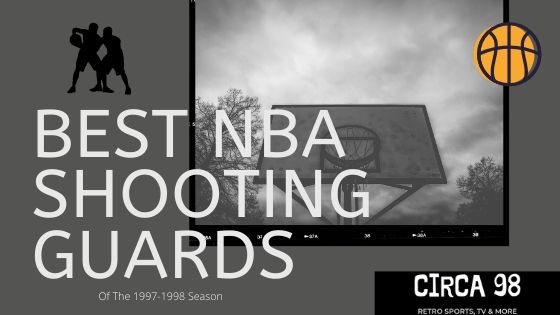 Who were the best NBA shooting guards in 1998? Circa 98 takes a closer look:

The GOAT enjoyed another great season in 1997-1998, culminating in his sixth NBA Championship and Finals MVP Award. MJ averaged 28.7 points per game in his age 34 season (led the league) while making All-NBA 1st team and All-Defense 1st Team.

In typical Jordan fashion, he also won both All-Star Game MVP and League MVP. His Airness’ scoring potency only increased during the postseason, jumping up to 32.7 PPG to go along with 5.1 RPG and 3.5 APG. It was quite a swan song for Michael.

As one of Michael’s most infamous rivals, Reggie Miller enjoyed another stellar season in 1997-1998. Indiana’s 2-guard averaged 19.6 points per game while shooting 43% from 3-point range and 86% from the foul line.

Miller led the Pacers to an impressive 58-24 record and a bold Eastern Conference Finals performance. The Pacers took Jordan’s Bulls to a game seven only to lose heartbreakingly. Miller’s scoring average increased slightly during the playoffs, moving from 19.6 PPG to 19.9 PPG.

Eddie Jones’ final season as a Laker would give way to Kobe Bryant’s ascendance. In the 98 season, Jones averaged 13.6 PPG with 2.0 SPG. He also shot nearly 39% from 3-Point range on over four attempts per game. Noted as a plus defender, Jones earned his spot on the All-Defensive 2nd Team.

The Lakers traded Jones in the following season to acquire Glen Rice from Charlotte.

1997-1998 was by most accounts the last year of Richmond’s prime. The popular 2-guard averaged 23.2 PPG on the way to his 6th consecutive All-Star appearance and 5th straight All-NBA Team (3rd Team). Richmond’s 3-point percentage dipped below his previous standards but was still well-above league average at nearly 39%.

Mitch’s dominance did not translate to team success, as his Sacramento Kings finished 27-55.

The man known as “Smitty” averaged 20.1 points per game during the 1997-1998 campaign, securing his first and only career All-Star appearance. Steve Smith complimented his scoring with 4.2 RPG and 4.0 APG.

With the help of Dikembe Mutumbo and Mookie Blaylock, Smith led the Hawks to a 50-32 record, which landed them the 5th seed in the Eastern Conference. Atlanta would go on to lose 3-1 to Charlotte in the first round. Smith’s scoring increased to 24.8 PPG during the postseason.

Though Kobe would become an all-time great shooting guard, he remained very green during his 2nd NBA campaign. Bryant was stuck behind Eddie Jones (#3 on our list) on the depth chart and ended up splitting time between 2-guard and Small Forward.

Despite limited opportunities, Bryant still earned his first career All-Star bid (ironically as a starter) and showed out during the contest. Kobe averaged 15.4 PPG in the regular season though it dipped down to 8.7 PPG in the postseason.

Bryant’s ascendance into superstardom was only one year away, as the Lakers traded Eddie Jones to Charlotte, clearing the SG spot for a hungry Kobe.

Chuck Person’s younger brother is seldom remembered as a top 10 shooting guard, but during the 1997-1998 campaign, it’s hard to dispute his ranking. Person averaged 14.7 points per game while shooting a ridiculous 43% for three-pointers on over five attempts per game.

Person led the league in 3PT field goals made and attempted though his scoring dropped off significantly during the postseason. The Cavs lost 3-1 in round one to Indiana, and Person’s scoring average dipped from 14.7 PPG to 8.0 PPG.

Allen’s second season failed to earn him any individual honors; however, his scoring average increased from 13.4 PPG in his rookie season to 19.5 PPG in his sophomore campaign. His 3-point shooting would not reach the Hall of Fame level he became famous for but showed potential at a 36% clip on over four attempts per game.

The former Uconn star’s free throw percentage stood at an impressive 87%. Allen’s Bucks fell short of the postseason, finishing with a 36-46 record.

Allan Houston turned in an impressive season for the New York Knicks in 1997-1998. While not named for any individual awards, Houston averaged 18.4 PPG on 38% shooting from beyond the arc. He helped the Knicks secure the 7th seed in the Eastern Conference with a 43-39 record.

The Knicks would upset the 2-seed Miami Heat in the first round before losing 4-1 to Indiana in the following series. Houston was magnificent, raising his postseason scoring average to 21.1 PPG, nearly 3 points higher than his regular-season average.

Isaiah Rider (AKA JR) remained an elite-level scorer for Portland throughout the 1997-1998 season. JR averaged 19.7 PPG to go along with 4.7 RPG and 3.1 APG. Rider helped Portland to the 6th seed in the Western Conference with a 46-36 record.

The Blazers lost in round one to Los Angeles despite Rider leading his team with 19.3 PPG. Rider would play one more season with Portland before getting traded to Atlanta for Steve Smith (#5 on our list).

Penny Hardaway: Anfrenee “Penny” Hardaway was an All-Star in 1997-1998 but only played in 19 games after blowing his left knee out

Jeff Hornaceck: Utah’s starting 2-guard for their back to back Finals run won the NBA 3-Point shootout during 1998 All-Star Weekend