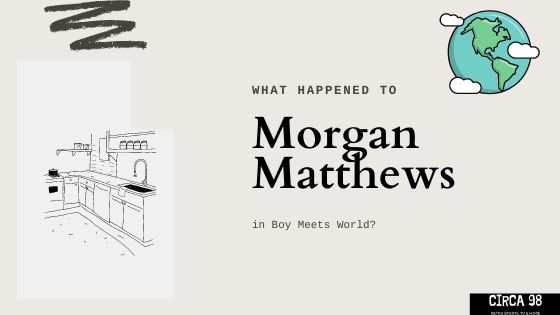 Morgan Matthews appears in all seven seasons of Boy Meets World, including 113 of the 158 total episodes. However, as Cory and Eric’s younger sister, Morgan’s role is minimal, especially after Season 1. The actress portraying Morgan changes after Season 2, and her character goes conspicuously absent several times throughout the series.

What Happened to the Original Morgan on Boy Meets World?

Who Replaced Lily Nicksay as Morgan in Boy Meets World?

Lindsay Ridgeway replaces Lily Nicksay as Morgan Matthews starting in Season 3, Episode 14. During her first on-screen appearance, the new Morgan makes light of her conspicuous absence from previous episodes but does not acknowledge that she is a different person entirely.

Though storylines rarely revolved around Morgan, she still made her presence known several times throughout the Boy Meets World series. Check out Morgan Matthews’ best Boy Meets World moments below.

Morgan drives by Cory in her Power Wheels car while mocking him. Cory gets upset and pushes her vehicle down the walkway. This funny moment often appeared in the promos for the Disney reruns.

In one of Morgan’s Season 1 mishaps, she puts her doll in the microwave. She first asks her Mom if it would be a mistake to keep her doll warm in the microwave, and when Amy replies that it would be, Morgan admits that she already made that mistake.

3) Morgan Sings Wind Beneath My Wings

Morgan enters a talent show during Season 5, where she sings Bette Midler’s Wind Beneath My Wings. Of course, the episode’s storyline primarily revolves around Cory’s realization that he’s just average.

In Season 4, Morgan briefly dates Herman Stecchino, the brother of Frankie The Enforcer. Like Frankie, Herman is a poet and a romantic.

After Eric leaves for Penbrook University, Morgan hires a look-alike to act as her older brother. But, of course, her parents explain that replacing Eric is not possible.