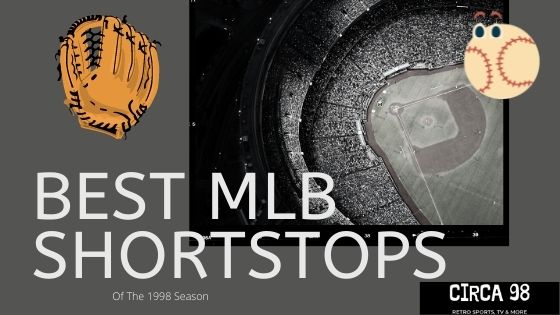 Who were the best MLB Shortstops during the 1998 Season? Circa 98 examines:

A-Rod was predictably outstanding in 1998, finishing 9th in MVP voting and making his 3rd consecutive All-Star game. Seattle’s starting SS hit .310 with 42 HRs, 124 RBIs, and 46 SBs while playing tremendous defense at the most premium position.

The superstar graded out at a 16.5 defensive value, according to Fangraphs. He combined with teammate Ken Griffey Jr. to form baseball’s best tandem. Still, Seattle failed to make the postseason, finishing 3rd in the AL West at 76-85.

Though considered overrated by critics, Jeter was undeniably great in 1998. Not only did he lead the New York Yankees to a ridiculous 114-48 record and World Series Championship, but he also finished 3rd in MVP voting while making his first All-Star appearance.

Overall, Jeter hit .324 with 19 HRs, 84 RBIs, and 30 SBs and later hit .353 in the World Series. In addition, Jeter’s defense was slightly overrated at the time but better than some critics suggest. Fangraphs awarded him a 10.1 defensive value, eighth overall among shortstops.

The Red Sox star SS inexplicably missed the All-Star game in 1998 despite finishing 2nd in MVP voting, above both players selected in his place (A-Rod and Jeter), who are also above him on this list.

Garciaparra hit 35 HRs with 122 RBIs and 12 SBs while playing outstanding defense. His Red Sox finished 92-70 before losing to Cleveland in the ALDS. Fangraphs considers him the second most valuable defensive shortstop in 1998.

Despite missing his first All-Star game in five seasons, the 34-year-old earned his eighth career Silver Slugger award and batted .309 with 17 HRs, 72 RBIs, and 26 SBs. In addition, Barry Larkin played terrific defense at shortstop, though his metrics were not as good as in previous seasons.

The shortstop’s Cincinnati Reds team finished 75-87, good enough for 4th in the NL Central. Several inferior shortstops appeared on the NL All-Star team ahead of him, inexplicably.

The glovesmen helped his Clevened Indians team reach the postseason, finishing 89-73 and first in the AL Central. Despite Vizquel hitting .440 in the ALCS, Cleveland lost to New York, who went on to win the World Series.

Though less of a household name than others on this list, Jay Bell enjoyed a productive ’98 season, his first with the Arizona Diamondbacks. While his career-best season would occur the following year, Bell previewed his performance by hitting .251 with 20 HRs and 67 RBIs.

Though he played 138 games at SS, Bell also started 15 games at 2B, which he subsequently transitioned to in 1999. Unfortunately, Bell’s D’Backs failed to perform, finishing 65-97.

Despite struggling mightily at the plate, Rey Ordóñez earned his second consecutive Gold Glove while playing stellar defense for the New York Mets. Aside from Omar Vizquel, Ordóñez was the best defensive SS in the MLB and easily the best defensive National League SS.

Based on talent alone, Ordóñez was better than Vizquel. The Gold Glover hit just .246 with 1 HR and 42 RBIs but helped the Mets to an 88-74 record, though they barely missed the postseason. Ultimately, Rey goes down as one of the best SS in Mets franchise history.

FanGraphs retroactively graded Bordick as an elite defensive SS in 1998. In addition, his 21.6 defensive value graded well above any other SS in baseball, including Omar Vizquel.

However, the eye test told a different story, with Bordick falling short on range and arm strength compared to others at his position. Nevertheless, the Orioles SS hit .260 with 13 HRs and 51 RBIs, helping his team to a 79-83 record.

After an atrocious ’97 season, Disarcina bounced back in 1998 by hitting .286 with 3 HRs, 56 RBIs, and 11 SBs. In addition, the former All-Star led all shortstops with 103 double plays turned while appearing in 157 games for Anaheim.

However, despite finishing at an impressive 85-77, the Angels failed to make the postseason in a stacked American League.

Weiss appeared in his first All-Star game in his 12th big league season and first with the Atlanta Braves. Unfortunately, the 1988 Rookie of the Year never quite lived up to his initial billing, and his selection as NL’s starting All-Star SS baffled the industry (outside of Atlanta Braves fans).

Overall, Weiss hit .280 with 0 HRs, 27 RBIs, and 7 SBs, a far cry from the Reds’ Barry Larkin’s numbers, who deserved the All-Star position. To Weiss’s credit, he went 2 for 3 in the game. Additionally, his Atlanta Braves team finished 106-56 before losing in the NLCS.