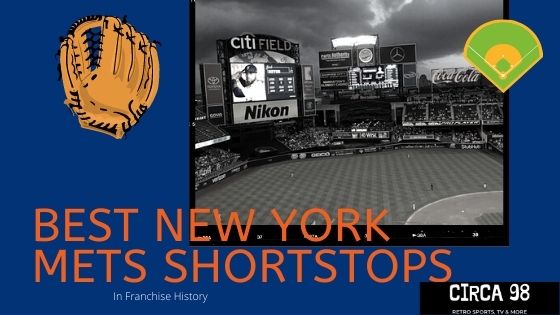 Ranking the best Mets shortstops in history is no easy task. After all, there have been some great players to come through Flushing, Queens. Not everyone will agree with the list since New York Mets fans are passionate.

Jose Reyes ranks 5th in all-time WAR for the New York Mets franchise, easily placing him atop the list of best Mets shortstops. Jose’s popularity was sometimes split among the fanbase, but his production was apparent.

The phenom’s best seasons came in 2006 and 2011, respectively, the latter in which he won the batting title with a .337 average. In addition, Reyes led all MLB players in stolen bases from 2005 through 2007.

Bud Harrelson helped the Mets to their first World Series championship serving as the shorting shortstop for the ’69 Miracle Mets. Over his 13-year Mets career, Harrelson accumulated an 18.7 WAR despite a .611 OPS.

While Harrelson’s defense was excellent, his offensive production was meager. The Mets SS hit only .234 in his Mets career and slugged an abysmal .287. Still, his presence was integral to the 60s and 70s Mets.

In addition to his glovework, Harrelson also succeeded with stolen bases, especially in the 70s. During his two All-Star campaigns (70, 71), Bud combined to steal 51 bases in 62 attempts.

Rey Ordóñez is a cult hero and one of the most compelling performers in franchise history for true Mets fans. Despite a horrendous batting average with putrid slugging, Ordóñez tantalized fans with generational defense.

The human highlight reel secured three consecutive Gold Glove awards from 1997 through 1999 before injuring himself during the 2000 campaign. Rey went on to play two additional seasons with the Mets before leaving.

Overall, Ordóñez slashed .245/.290/.304 over seven New York Mets seasons. Still, his 10.2 Defensive WAR trounces every other SS on this list, making him an easy choice for the third greatest Mets shortstop ever.

Asdrúbal Cabrera spent three seasons with the Mets providing some of their best offensive production at the shortstop position. Cabrera’s Mets career .803 OPS is #1 all-time among Mets shortstops (among minimum 162 starts at SS).

Keep in mind that after 2016 Cabrera was no longer an everyday shortstop, spending much of his time at 3B and 2B, respectively. Still, in 2016, Cabrera hit .280 with 23 HRs and 62 RBIs, helping the Mets reach the Wild Card game.

Cabrera’s defense never lived up to his offensive production as his -1.5 dWAR ranks among the worst on this list. With that said, Asdrubel’s best defensive season occurred in 2016, where he played 135 games at SS.

Rubén Tejada arrived with the New York Mets as a 20-year old rookie in 2010 and went on to play six seasons with the franchise before returning for six additional games in 2019. Tejada hit .254 with a .650 OPS over seven seasons.

Though not considered a fan favorite, Tejada was generally underrated as a New York Mets SS. However, his approval rating increased after Chase Utley broke his leg on what many considered a dirty slide during the 2015 NLDS.

After breaking his leg, Tejada was never quite the same and left the Mets the following season before returning for six games in 2019. Still, Tejada’s 5.1 Mets WAR is among the top 3 on this list.

Elster joined the Mets as a rookie during their 1986 World Series run though he only played in 19 regular-season games and five postseason games. By 1988, Elster served as the Mets everyday SS through 1991.

Overall, Elster demonstrated above-average defense with some power, though his overall offensive production lacked potency as he batted only .224 throughout his seven Mets seasons.

The Mets granted Elster free agency in December 1992 after he played a total of 537 games for the franchise over seven Big Leauge seasons. Elster went on to play for several other MLB teams, though never reaching All-Star status.

As a highly-touted prospect, Amed Rosario failed to live up to most fans’ expectations. However, when you look at his overall production, Amed was one of the best shortstops in Mets franchise history.

Over 403 games, Rosario hit .268 with 32 HRs, 148 RBIs, and 50 SBs while playing mediocre defense. Though his athleticism never entirely translated into the five tools scouts once projected, he showed his star potential in flashes.

The Mets used Rosario as a centerpiece for their Fransisco Lindor acquisition along with another former Mets prospect, Andrés Giménez. Rosario played solid baseball for the Cleveland Guardians in 2021.

Despite his career-worst season, Fransisco Lindor provided one of the greatest seasons for a shortstop in New York Mets franchise history. Lindor slashed .230/.322/.412 with 20 HRs, 63 RBIs, and 10 SBs.

Lindor certainly did not endear himself to some sections of the Mets fanbase in 2021; however, his overall production was still well above average. Additionally, even in an offensive down year, Lindor provided elite defense.

After signing a 10-year extension, Lindor has a great chance to reach #1 on this list by the end of his tenure. But, of course, he can help himself immeasurably by bouncing back offensively in 2022 and leading the Mets to the postseason.

Despite a mediocre career, Rafael Santana lives in Mets infamy as the starting SS for the 1986 World Series championship team. During the ’86 World Series, Santana hit .250 with 2 RBIs, helping his team win it all.

During his four seasons with the Mets, Santana hit just .248 with a measly .607 OPS. Of course, Rafael was primarily known as a solid defender rather than an offensive threat. Santana’s 2.8 dWar is fifth on this list.

One of Santana’s other strengths was durability, playing in at least 139 games in three consecutive Mets seasons. Then, in 1987, the Mets traded Santana to the New York Yankees, where he spent one season.

Mets fans remember José Vizcaíno during some of the teams’ most depressing seasons. José played for the New York Mets from 1994 through 1996 before trading him to Cleveland with Jeff Kent in mid-season.

While Vizcaíno was never a highlight-reel shortstop, he provided solid production throughout his tenure. Overall, José batted .282 with 7 HRs, 121 RBIs, and 18 SBs over 2.5 seasons while playing average defense.

Perhaps his most incredible Mets legacy will be his departure which involved the Mets trading him and future Hall of Fame candidate Jeff Kent for Carlos Bearga, who never panned out for the Mets.

Wilmer Flores: Played only one season as everyday SS.

Kazuo Matsui: Kaz was a high-profile international signing in 2003.