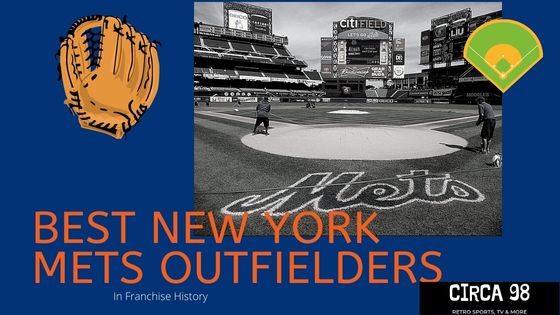 Beltran’s 31.1 career WAR is second only to Daryl Strawberry among Mets outfielders. However, Beltran was a better overall player, and his 2006 single-season WAR of 8.2 is the second-best in franchise history behind David Wright.

It’s clear that Beltran’s peak was higher than Strawberry, though Daryl has a World Series championship in 1986. In addition, Beltran’s strikeout in the 2006 NLCS has diluted some fans’ perception of his greatness.

Strawberry emerged as the face of the franchise along with Doc Gooden in the 1980s. His Mets career WAR 36.6 is the best among outfielders and second only to David Wright among position players.

Aside from his stellar on-field play, Strawberry gave the 80’s Mets a clear identity as a homegrown talent and a can’t-miss five-tool player. His Mets career culminated with a World Series championship in 1986 over the Red Sox.

Although Agee ranks behind Brandon Nimmo, Lenny Dykstra, and Michael Conforto for Mets career WAR, his peak was greater than any of them, and he’s clearly the superior player. Agee helped bring the Mets a World Series championship in 1969 after coming over from the White Sox after the 1967 season.

Agee was already an All-Star before joining the Mets and won Rookie of The Year in 1966 to go along with a Gold Glove.

Mookie Wilson is a New York Mets legend and perennial “fan favorite.” known best for his game-winning ground ball in Game 6 of the 1986 World Series. However, Wilson’s career was better than a single moment. For example, Mookie’s 20.8 Mets WAR is 9th in franchise history and 3rd among Mets outfielders.

His peak WAR of 3.4 came in 1984, and he nearly matched it in the 86′ season with a 3.0 WAR. Wilson is also second in franchise history with 281 stolen bases, trailing only Jose Reyes.

Lenny Dykstra is 16th in franchise history with a 16.5 WAR, ranking 6th among Mets outfielders. His peak Mets season occurred in 1986 when he contributed a 4.6 single-season WAR and helped the Mets win a World Series championship.

Dykstra’s signature Mets moment came when he hit a walk-off HR in game 3 of the ’86 ALCS.

Cespedes is arguably the most talented player on this list, but injuries derailed his Mets career. Even still, his 2015 peak is unlike anything the team has ever experienced.

After joining the Mets at the July 31st trade deadline of 2015, Cespedes slugged .604, ranking third in franchise history behind Mike Piazza and Dominic Smith. Yoenis’s athletic range and cannon for an arm resulted in a Gold Glove while leading the Mets to a division title and World Series appearance.

Brandon Nimmo has compiled an impressive career WAR of 17.1, all with the New York Mets, who drafted him in the 1st round back in 2011. Joining the MLB club in 2016, Nimmo has gotten progressively better, resulting in a 2022 career-best WAR of 5.0.

If Nimmo remains with the Mets, it’s likely he will climb higher on the list.

Though Gilkey only played two full seasons with the Mets, his 1996 campaign was among the best in franchise history. Gilkey still holds the franchise record for doubles (44) in a single season when he hit .317 with 30 HR and 117 RBIs.

His ’96 performance resulted in an 8.1 WAR, good enough for third in franchise history and second among outfielders.

Like Nimmo, Micheal Conforto compiled an impressive career WAR after being drafted by the Mets in the first round. Conforto debuted during the 2015 pennate race and played his entire career with the Mets through 2021 before sitting out the entire 2022 season with an injury.

Confort’s best season occurred in 2017 when he posted a 3.7 WAR and was awarded his first All-Star selection.

Juan Lagaras: Arguably the greatest defensive outfielder in Mets history, as evidenced by his 10.1 career dWAR, which ranks best among outfielders.

Kevin Mitchell: Despite finishing third in ROY voting, the Mets foolishly traded Mitchell after the ’86 World Series for Kevin McReynolds. Mitchell played all around the diamond, including all three outfield positions, and would later emerge as an MVP for the San Fransisco Giants in 1989.

Ron Swoboda: Overshadowed by teammates Cleon Jones and Tommie Agee, Swoboda was the third outfielder on the 1969 World Series team, on which he made an iconic defensive play.

Ricky Henderson: The Hall of Famer spent one full season with the Mets (1999) when he posted an impressive .889 OPS with 37 stolen bases.

Steve Henderson: Finished 2nd in ROY during his 1977 debut and posted a 9.4 WAR over four impressive Mets seasons.

Angel Pagan: Advanced metrics mark Angel Pagan as one of the best defensive outfielders in Mets history. His 2010 dWAR of 2.2 is second only to Juan Lagaras (twice) among Mets outfielders for a single season.

Curtis Granderson: Part of the 2015 NLCS team, Granderson accumulated a 10.9 WAR during his Mets career.

Cliff Floyd: Part of the 2006 super team with David Wright and Jose Reyes, Floyd was much better in 2005 when he achieved a 4.7 single-season WAR.

Rusty Staub: Rusty played some first base throughout his career but played RF exclusively with the Mets from 1972 through 1975. His ’75 season was particularly good when he achieved a 3.0 single-season WAR.

John Milner: Milner split time between the outfield and 1st base but finished 3rd in ROY voting during 1972.

Joel Youngblood: Youngblood’s 9.3 career Mets WAR is impressive. His best season occurred in 1981 when he hit .350 and made his only All-Star game. Unfortunately, the sample size was reduced to 43 games because of injury.

Bobby Bonilla: Despite being viewed as a joke by much of the fanbase, Bonilla was quite good for the Mets, particularly from 1993 through 1995. His return in 1999 did not go as well, posting a meager .579 OPS.