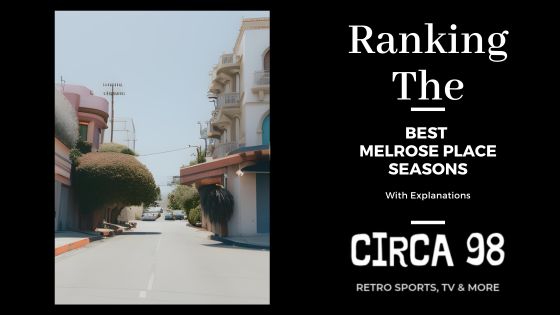 You’ve probably asked yourself, what’s the best season of Melrose Place? For those unaware, Melrose Place aired for seven seasons from 1992 through 1999. Fans and critics argue about which season was the best and which was the worst. At Circa 98, we like to put things in context and deliver a fair ranking. So let’s take a look at our order for the best Melrose Place seasons.

Season 2 is the most famous Season of Melrose Place and, frankly, the best season. Kimberly’s car accident and shocking return from her coma surprised viewers across the world. In addition, Sydney’s pursuit and blackmail of Micheal remains a television classic.

We can’t forget Amanda’s first season serving as the apartment complex owner, which dramatically changed Melrose Place’s dynamic. While the second season traded realism for engagement (like why is a wealthy advertising executive living in this dump?), viewers were more than willing to suspend their disbelief for the addictive plots delivered by the characters.

Sydney’s transition from a part-time character to a full-time resident put the show over the top, both with ratings and drama. We’d be remiss not to mention that writers buried Melrose Place’s innocence in Season 2, but it received more viewers, more buzz, and more money in exchange. If you can move beyond the show’s unrealistic storylines, you will find yourself hooked on Season 2 in a binge-worthy fashion.

Season 5 was Melrose Place’s second peak and, ultimately, the last season that mainstream viewers watched. Several top characters like Sydney, Alison, Jake, Kimberly, and Jane would depart during or after the season ended.

Melrose’s Place certainly understood how to go out with a bang despite the mass exodus of integral cast members. The problem, of course, was that the series wasn’t over. Aaron Spelling would not leave money on the table (and who could blame him?), but Season 5 was the final season in many respects.

So many plot points converged during the fifth season. So much so that looking away seemed risky to viewers. While Melrose became a far cry from its initial concept, the soap opera it evolved into was never more appealing than this season. Sydney’s death in the finale seemed fitting since, for many viewers, the show died along with her.

Melrose’s inaugural season was panned by critics and failed to generate as many viewers as one would expect from a Beverly Hills 90210 spinoff. As evidenced by its lack of popularity, Season 1 is almost an entirely different show than its subsequent seasons. Though lower-than-expected network ratings precipitated a philosophical shift from an episodic series into a full-fledged soap opera, the original concept was far more appealing, in retrospect.

Season 1 explores the lives of working-class 30somethings, contrasting the glamour of the series’ predecessor Beverly Hills 90210. Though perhaps too boring for its target audience’s tastes, the first season was the most realistic, thanks primarily to short-lived characters like Rhonda and Sandy who represented regular people working regular jobs.

Ultimately, the characters showcased more diversity, with each of them working in separate locations and leading mutually exclusive lives. Take Billy Campbell, for example, an aspiring screenwriter who drives cabs as a side-gig. The first season exhibited wonder and a genuine curiosity about these people’s lives but failed to engage enough of its target market to sustain a watchable series.

Season 3 feels like the natural continuation of the previous season and nearly as compelling. While the initial season’s idealism is long gone, Season 3 is quite entertaining. As an over-the-top soap opera, the third season of Melrose gives the people what they want.

The series’ reach was so extensive that Seinfeld parodied the season in their episode, The Beard. Most viewers related to Jerry Seinfeld’s sentiment, categorizing Melrose Place as a guilty pleasure that remains highly addictive though inexplicable.

From Jo chasing down her baby’s armed grandparents to Kimberly blowing up the entire Melrose Place complex, Season 3 left an indelible impression, albeit one where some viewers didn’t know whether to laugh or cry. By the season finale, Melrose Place was unapologetically campy.

Tenured viewers billed Season 7 as a last-ditch effort to revitalize a series on life support. For example, Jane Mancini (an original cast member) returns to placate long-standing fans with a thirst of yesteryear. While her reappearance certainly helps the show, it falls short of delaying its inevitable demise.

The final season’s writing is superior to its most recent predecessor though considerably beneath its peak level. Characters like Kyle Mcbride, Eve Clearly, and Ryan McBride put forth admirable performances, but none of them are enough to fill voids left from departed cast members.

Despite its apparent flaws, Melrose Place’s swan song is decidedly watchable due mainly to the evolution of characters like Lexi and Peter Burns. In addition, original staples like Michael and Jane provide enough foundation for newer characters to flourish.

The final episode (series finale) failed viewers on multiple fronts, but the season itself was enough to keep the last of them around.

Best Episodes: Ball n’ Jane, Fiddling on the Roof, Not Quite All About Eve

Season 4 is atrocious. While the show remains watchable because of its star-studded cast, the episodes during the fourth season leave viewers in a state of perpetual misery. For example, all the characters somehow survived the apartment building’s explosion, with only Alison suffering long-term effects.

Perhaps most insanely, Kimberly Shaw’s plot extends beyond any semblance of reality when she gains control of mental health asylum by convincing doctors that Peter Burns is the mentally unstable one, rather than her (which is unbelievable on every level).

If viewers hadn’t taken a moment to process exactly how far removed from reality the series had gotten, they might find such absurd storylines as commonplace. Nevertheless, as someone who remembers the pilot, Season 4 was a disgrace to the series legacy.

Season 6 rivals the fourth season as the series low-point. However, the distinction between 6 and 4 is the disparity of original cast members, mainly gone by Season 6. With poor storylines and lesser characters, the sixth season looked an awful lot like rock bottom.

In fairness to the series, newcomers like Kyle and Taylor McBride emerged as solid characters, delivering memorable performances that cemented them into Melrose folklore.

Despite such silver linings, a badge of honor is not appropriate for every new cast member, keeping viewers longing for the originals. From a minor league baseball player stealing Billy’s wife (Samantha) to a forced romance between Billy and Jennifer (double write-off, anyone?), Season 6 left a disturbing taste in the collective mouths of Melrose faithful.

Best Episodes: The Doctor is in… Deep, Attack of The Scalpel Woman, A Bump in The Night