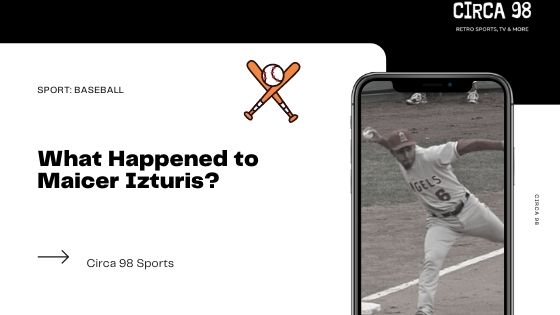 Maicer Izturis is a former MLB infielder who played ten seasons in the big leagues from 2004 through 2014. Cesar Izturis’s half-brother played for four MLB teams and spent time with a 5th in the Minor Leagues.

Izturis played multiple positions throughout his career while spending most of his time at 3B, 2B, and SS. Overall, Maicer slashed .269/.331./.372, resulting in a solid career OPS of .703.

Signed by Cleveland as an amateur free agent, the Barquisimeto, Venezuela native, enjoyed a solid Minor League Baseball career before entering the Major Leagues in 2004. Cleveland traded Izturis with Ryan Church to Montreal for Scott Stewart.

Maicer Izturis first broke into Major League Baseball with the Montreal Expos in 2004. As a rookie, Itzturis appeared in 32 games while batting .206 with 1 HR, 4 RBIs, and 4 SBs. Macier played 23 games at SS and ten at 2B as a versatile infielder.

The Expos traded Izturis to Anaheim before the 2005 season, less than one year after acquiring him from Cleveland. This time, Maicer was part of a package with Juan Rivera to acquire Jose Guillen.

After the trade, Izturis played 77 games for the Angels, batting .246 with 1 HR, 15 RBIs, and 9 SB. In addition, the primary infielder sported his defensive versatility by splitting time between 3B and SS and appearing in one game as a CF.

Perceived initially as a utility infielder, Maicer Izturis proved to be a starting-caliber player in 2006 when he enjoyed a breakout campaign resulting in a .293/.365/.412 slash line. In addition, Izturis set career highs (at the time) in games played, HRs, SBs, and OPS.

Maicer started most of his games at 3B in 2006, serving as the Angels’ primary starting third basemen. However, Itzturis also appeared at SS and 2B on occasion, once again showcasing his defensive versatility.

Although the Angles were swept 3-0 by Boston in the 2007 ALDS, Maicer enjoyed the highest OPS on the entire roster with .833. The infielder had four hits in 12 ABs, including two doubles.

After a down year in 2008, Maicer bounced back for his best career season in 2009. Izturis hit .300 for the first time in his career while adding 8 HRs and 65 RBIs, both career highs. He also stole 13 bases.

On defense, Itzturis continued his duty as a middle infielder, where he played 68 games at 2B and 28 at SS. His dWar of 0.9 tied his career-high, set one year earlier in 2008.

Maicer regressed substantially in 2010, playing in only 61 games and losing 50 points off his batting average. Overall, Itzturis hit .250 with 3 HR, 27 RBIs, and 7 SBs. Nevertheless, he returned to his primary 3B position, playing 28 of his 61 games at the hot corner.

Repeating his pattern, Maicer once again enjoyed a bounceback season in response to a subpar campaign. in 2011, Izturis hit .276 with 5 HRs, 38 RBIs and 9 SBs. He split time fairly evenly between 2B, 3B, and SS.

Itzturis’ final season in Anaheim would prove anti-climactic as his average dipped to .256 over 100 total games. On a positive note, Maicer set a career-high in stolen bases, swiping 17 bags while only being caught twice. Maicer again split time between 2B, 3B, and SS.

Maicer signed a three-year, 9 million dollar deal with the Toronto Blue Jays before 2013. The contract contained a club option for 2016 with a 1 million dollar buyout. Despite a nice contract, Maicer failed to live up to expectations in Toronto, slashing .236/.288./.310 over 107 games.

Defensively, Itzturis continued his role as a versatile infielder, spending 59 games at 2B, 36 at 3B, and 28 at SS. Unfortunately, injuries caught up with the once-plus defender, and his dWar dipped below zero.

Izturis’ final big league season proved disappointing as he only appeared in 11 total games for Toronto. Over that span, Maicer hit .286 with 0 HRs, 1 RBI, and 1 SB. Unfortunately, the former Angel was slowed by a groin injury and a shoulder tear that effectively ended his career.

Maicer attempted to return from a shoulder tear with the Blue Jays A+ affiliate in 2015 but struggled to a .231 batting average of 15 total plate appearances. Izturis announced his retirement the following year.

Maicer played for 3 MLB teams, the Montreal Expos, the Los Angeles Angels of Anaheim, and the Toronto Blue Jays. Izturis also spent time with the Cleveland Indians (Guardians) organization, who signed him as an amateur free agent in 1998.

What Positions Did Maicer Izturis Play?

Izturis played Third Base, Shortstop, and Second Base while appearing in 2 career games in the outfield (CF and LF). 3B was considered Maicer’s best position, which he played most frequently throughout his career.

Are Maicer and Cesar Izturis Brothers?

Maicer and Cesar Izturis are half brothers who share the same father. Although they grew up in the same city, the brothers never played on the same baseball team, even as amateurs. Maicer is also a half-brother of Julio Izturis, who played Minor League Baseball from 2006 to 2011.