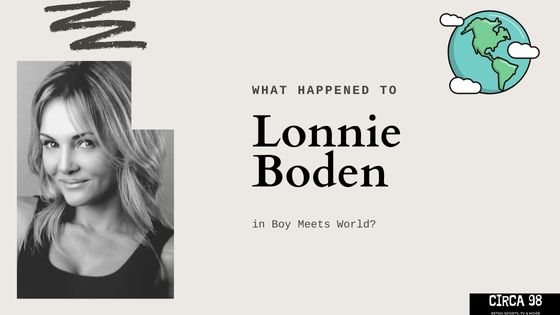 Still, she saves Eric’s life after their car is stranded in a blizzard while driving up the mountains. Lonnie strips both of them naked before snuggling in a sleeping bag in what she refers to as the “trappers trick,” which is a survival method aimed at increasing body temperature.

Unfortunately for Eric, he remains unconscious during the ordeal and only learns what happened after returning to his home in Philadelphia. Ultimately, Lonnie disappears from the show toward the end of Season 4, and her sudden absence is never explained.

Who is Lonnie Boden?

Lonnie Boden is a Boy Meets World character that appears in Season 4 of the series. She is the niece of Ezekiel Boden, Alan’s employee at his camping store. Lonnie replaces Ezeikel at the store after he leaves town to attend to his ill mother.

She is known primarily for her unique blend of feminine beauty and roughneck, rural survival skills.

When is Lonnie Introduced in Boy Meets World?

Lonnie first appears in Season 4, Episode 6, when her uncle Ezekiel asks her to fill in for him as an employee at Alan Matthews’s camping store. Lonnie agrees and ends up increasing sales and revenue by selling lots of camping equipment to middle-aged men entering the store.

Lonnie is introduced to the series through one of her family members, Ezekiel. She is the niece of Ezekiel and replaces him at Alan’s camping store. You can learn more about her family dynamic below:

Ezekiel Boden is Lonnie’s uncle. He helped raise her as the lone girl among 20 other boys, including her 11 brothers and 9 male cousins. Lonnie’s upbringing provides her with survival skills and rural know-how that aids her sale of outdoor equipment. In addition, she is gorgeous and personable, which also helps sales.

Who Does Lonnie Date in Boy Meets World?

After Eric’s repeated pursuits, Lonnie agrees to drive up the mountains with him for Christmas. However, their car is stuck in a blizzard, where they remain stranded for several hours.

Lonnie strips both of them naked to increase their body heat, essentially saving their lives as a result. Eric is unconscious during the ordeal, so he never actually experiences it.

As noted, Lonnie dates Eric Matthews, though it’s clear that their relationship has limited potential. Lonnie is an outdoorswoman with a rural upbringing, while Eric was raised in the city and suburbs without survival skills. Nevertheless, Eric remains smitten with the beautiful older woman.

Lonnie’s exit from the Boy Meets World series is never explained. However, her last on-screen appearance occurs in the Season 4 episode: Chick Like Me. Once Eric leaves Matthews’ Wilderness Outpost to attend Pennbrook University, scenes involving the store dissipate for the remainder of the series.

As a result, Lonnie’s presence on the show was no longer essential. Still, many fans remain disappointed that she did not return for Season 5, as she won over much of the series’ loyal fanbase during her brief tenure.

Jennifer Campbell portrays Lonnie Boden in Boy Meets World. According to IMDB, her other credits include Seinfeld, Fraiser, Baywatch, and Baywatch Nights, and she retired from acting in the late 90s.