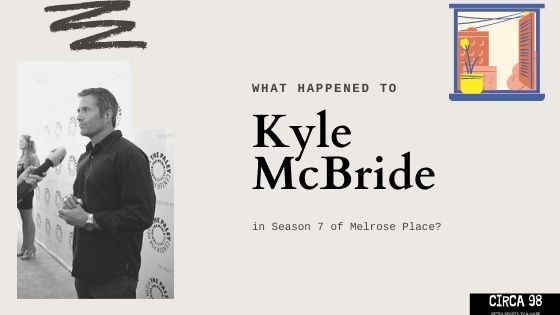 Kyle McBride endured a range of emotions throughout Melrose Place Season 7. Though he was not one of the original Melrose Place characters, Kyle had established himself as one of the essential roles after Jake, Billy, and Matt’s departures.

During the series’ final season, Kyle kills Rory, reunites with his brother Ryan, divorces Amanda, and proposes to Jane.

How Does Kyle Enter Season 7?

Kyle continues his plan of faking interest in his ex-wife Taylor so that she can admit that Christine’s suicide had nothing to do with Amanda. It is a ploy to rid Amanda of the guilt that destroyed their marriage.

In the following episode, Kyle travels overseas to assure Amanda that Taylor and Nick were solely responsible for Christine’s death. He finds that Rory has poisoned her, so Kyle kills Rory and returns with Amanda to the mainland.

Kyle’s ethical manslaughter of Rory is just the beginning. Here’s what Kyle does next.

He Reunites with his Younger Brother, Ryan

Kyle’s younger brother visits L.A. and decides to stick around. Though the two are not incredibly close, Ryan decides to move into the Melrose Place apartment complex right next door. He gets a job with Kyle’s wife, Amanda, at her new advertising firm.

Ryan seems jealous of Kyle because of his status as a war hero and their father’s apparent preference. Still, the brothers rekindle their relationship by playing basketball and going out for beers.

Because of his experience in the gulf as a Marine, Kyle suspects that sterility is possible. His awareness is magnified when Amanda determines that having a child is her #1 priority. Kyle asks Peter to keep the results confidential.

One of the lab technicians gives Peter the wrong file, which indicates Kyle’s sterility. When Peter breaks the news, Kyle goes into a drug and alcohol-induced tailspin, effectively ruining his marriage.

He Drinks Excessively and Uses Narcotics

Kyle’s presumed sterility sends him on a downward spiral. Kyle refuses to tell Amanda about the results and instead masks his feelings with alcohol. He decides to visit New York to scout bands for his Jazz club when a band manager introduces him to narcotics.

Kyle mixes alcohol and anti-depressants prescribed to him by Peter Burns. The spiral continues until lab results indicate his sterility was inaccurate.

After learning about Amanda’s pregnancy, Kyle assumes that Peter is the father. Since Kyle believes he’s sterile, it is not possible in his mind for the child to be his own.

In a rage-induced stupor, Kyle visits the club intending to kill Peter in cold blood. His pregnant wife tries to break up the mayhem when he pushes her down, causing her to lose their baby.

After accidentally terminating Amanda’s pregnancy, Kyle realizes their relationship is doomed. Amanda applies too much pressure on Kyle, who becomes someone else. The couple grows further apart when they move in with Jane Andrews, who Kyle admires.

When Amanda fires Jane out of apparent spite, Kyle becomes livid and pursues their divorce. After both parties cool off, they determine the divorce can be civil and without pettiness.

He Proposes to Jane

After divorcing Amanda, Kyle immediately pursues Jane. The two become engaged when they learn of Jane’s pregnancy, which was initially presumed to be Kyle’s child. Jane only knows of the child’s true father (Micheal) after already accepting Kyle’s proposal.

Deeply embarrassed, Jane plans to leave Los Angeles, leaving only a written letter behind. Megan stops it from happening by telling Kyle about the father, to which Kyle assures Jane that they will raise it as their own.

More About Kyle McBride in Season 7

Where Does Kyle McBride Live During Season 7?

Kyle first lives at the Melrose Place apartment complex with his wife, Amanda. However, they decide to move in at Jane’s beach house after selling the complex.

Kyle also started constructing a home he planned to build with Amanda. Unfortunately, he burns it to the ground in a drunken stupor.

Who Does Kyle McBride Date During Season 7?

Kyle dates his wife, Amanda, until their divorce. He also has a brief relationship with some band groupies in New York. After divorcing Amanda, he pursues Jane, whom he dates for the remainder of the season.

As of the finale, Jane and Kyle are married and raising Jane’s child as their own.

Who Are Kyle’s Best Friends In Season 7?

Kyle’s best friends are Ryan (his brother) and Megan. He has an odd relationship with Peter Burns, who seems like his best friend, and at other times seems like his mortal enemy. The nuance makes sense when considering Peter’s lingering feelings for Kyle’s wife, Amanda.

Peter is also the person responsible for breaking them up, whether intentional or not. Kyle becomes close to Eve, too, since he promises to keep her secret.

3 thoughts on “What Happened to Kyle McBride in Season 7 of Melrose Place?”