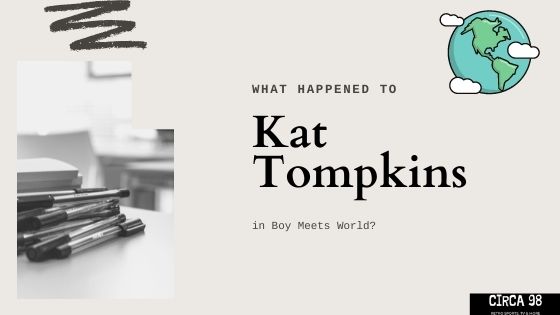 Kat Tompkins appears in one Boy Meets World season (Season 2), where she joins the John Adams High School faculty and briefly dates fellow teacher, Jonathon Turner. The colleagues appear to share a mutual attraction after meeting in the school cafeteria.

Kat and Jonathon start dating regularly during parts of Season 2. However, after Mr. Turner fails to commit to Katherine, she leaves the series permanently.

Who is Kat Tompkins?

Kat or Katherine Tompkins is one of the most memorable Boy Meets World characters from Season 2, where she emerges as a Social Studies teacher at John Adams High School and Jonathon Turner’s girlfriend.

How is Ms. Tompkins Introduced on Boy Meets World?

Kat Tompkins first appears in Season 2, Episode 9: Fear Strikes Out. Jon Turner spots her in the school cafeteria where the teachers inexplicably ate their lunch surrounded by students.

The setup drastically contrasted with most schools that have a faculty dining area. Nevertheless, Kat catches Jonathon’s attention, who promptly grills Mr. Feeny about her background and relationship status.

Later in the episode, Mr. Turner reveals his date plans with Katherine, who agrees to meet him for dinner. The two evidently hit it off after Kat says, see you tonight within earshot of Mr. Turner and Mr. Feeny.

Who Does Kat Tompkins Date on Boy Meets World?

Ms. Tompkins dates Jonathon Turner for part of Season 2, including accompanying him to the Turnaround Dance at John Adams High School. However, she breaks up with Turner when he fails to commit to a long-term relationship.

We know that Katherine spends the night at Jonathon’s apartment, at least once, as he brings an item she left behind to the school the following day. Kat also appears on-screen when Shawn Hunter shows up one evening in the condo.

John Adams High School announces The Turnaround Dance, encouraging women to ask men to the dance, rather than the traditional expectation.

When Mr. Turner signs up as a chaperone, he hopes Kat will ask him to the dance. But, instead, she makes him sweat for it before finally asking.

Kat proclaims that she feels safe when Turner holds her but demands a commitment to continue the relationship. Mr. Turner is unwilling to commit, so he dances around the subject until Shawn shows up.

When Chet flees the trailer park — leaving his son homeless, Mr. Turner offers Shawn a place to live. But, as a result, his new commitment is raising a teenager, and he has no room for a serious relationship.

Though we never see her in a classroom setting, Ms. Tompkins represents one of the most attractive Boy Meets World teachers. Her students fawn over her beauty and attempt to live vicariously through Mr. Turner.