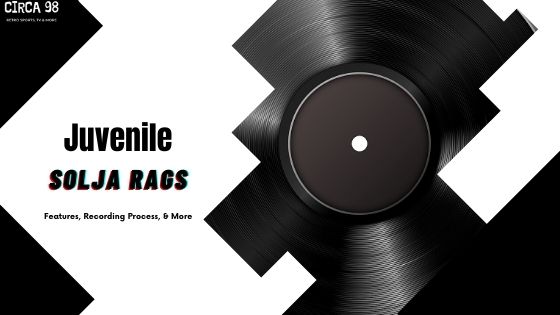 Juvenile released Solja Rags, his Cash Money Records debut album, on May 13, 1997. Though its sales would pale compared to his subsequent 400 Degreez album, it sold 200,000 units independently, an impressive number considering the lack of commercial funding. After Cash Money Records’ famous Universal deal, they would re-release the album in 1999.

When Was Solja Rags Released?

Cash Money Records released Solja Rags independently on May 13, 1997. The label reissued the album in 1999 after signing a pressing and distribution deal with Universal Records in 1998.

Juvenile’s most popular label-mate (at the time) appears on two Solja Rags tracks, including I Did That and Welcome 2 Tha Section.

The Houston native, who had not yet released a solo album at the time, appears on I Did That.

The future mega-star Lil Wayne, still a teenager at the time, appears on two of the album’s tracks, Hide Out or Ride Out and Spittin’ Game.

The late great bounce music legend appeared as a teenager on the track 3rd Ward Soulja after getting discovered by Birdman and Soulja Slim, who came up with her stage name.

Turk would make his Cash Money debut on Solja Rags, where he appears on I Did That, Hide Out or Ride Out, and Spittin’ Game, the latter of which was also included on The Hot Boys debut album Get It How U Live.

Ziggler The Wiggler appears on the album’s intro, as he does on several other Cash Money Records albums.

Solja Rags sold 200,000 units independently after its initial 1997 release and hundreds of thousands more in its subsequent 1999 re-release.

The track, Solja Rag, was released as a single with an accompanying music video. The song served as the framework for Juvenile’s mega-hit HA, which he released one year later as part of his 400 Degreez album.

Was Solja Rags a Good Album?

Solja Rags is considered a New Orleans classic as it moved 200,000 copies independently. Though not considered Juvenile’s best album, it is regarded as a great album among Southern Hip Hop enthusiasts.

Solja Rags was initially released independently before Cash Money signed their deal with Universal Records. However, the album was reissued commercially in 1999 after Juvenile’s popularity skyrocketed nationally.

What Are The Best Tracks on Solja Rags?