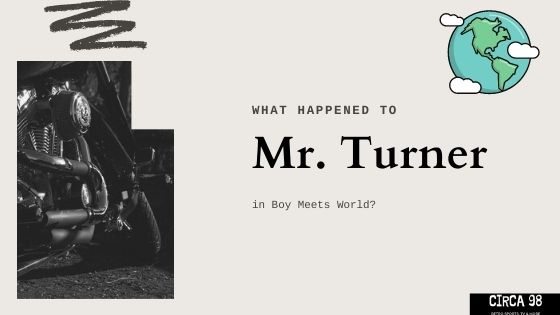 Mr. Turner makes a lasting impression on Boy Meets World during his three seasons on the show. In addition to serving as an English teacher at John Adams High School, Jonathon Turner also serves as Shawn Hunter’s guardian for most of Season 3.

Toward the end of Season 4, Jonathon Turner suffers a motorcycle accident that results in his hospitalization. After taking the call from the hospital, Mr. Feeny indicates that Mr. Turner is in serious condition.

Shawn, Cory, and Topanga visit Turner at the hospital, but he is unable to speak. Instead, his only form of communication comes when he squeezes Shawn’s hand. Unfortunately, the show never resolves the storyline, and Turner never again appears on Boy Meets World.

Editor’s Note: Some fans believe Minkus’s Season 5 reference to Turner on the “other side of the school“ is meant to be taken literally. In reality, the writers wrote a joke to make fun of the show’s continuity issues.

Who is Mr. Turner?

Jonathon Turner is a Boy Meets World character that appears in seasons two through four before exiting the show on ambiguous terms. His final on-screen appearance occurs in a hospital bed after a motorcycle accident.

While on the show, Mr. Turner serves as an English teacher at John Adams High School and Shawn Hunter’s temporary guardian. The bachelor lives in an apartment in Philadelphia near John Adams High.

Loyal fans remember Jonathon Turner as a relatable and caring teacher who goes out of his way to provide Shawn Hunter with a better life. In addition, the fan-favorites’ comedic charm adds needed contrast to Mr. Feeny’s rigid demeanor.

How is Mr. Turner Introduced on Boy Meets World?

Mr. Turner first appears in the Season 2 premiere: Back 2 School, when he debuts as Cory and Shawn’s English teacher. Cory initially mistakes Turner for Harley Keiner because of his youthful demeanor and motorcycle helmet.

After identifying himself as their teacher, he assigns the class an X-Men comic book to contrast with their traditional book, The Odyssey. He announces that Cory will lead the discussion on the similarities and differences.

Most students immediately gravitate to him because his modern teaching methods contrast with traditionalists like George Feeny. As a result, Mr. Feeny takes issue with Turner’s X-Men assignment, though he allows it.

Later in the episode, Turner saves Cory from Harley Keiner, who plans to pound Cory into the ground after the 7th-grader accidentally gets him in trouble. However, when Mr. Turner shows up, Harley flees the scene.

When Does Mr. Turner Get in an Accident?

Turner gets into an accident in the Season 4 episode, Cult Fiction. Mr. Feeny receives the call from the hospital, and Alan, Amy, and Cory immediately drive down to see him. Shawn soon follows with Mr. Mack.

In the storyline, Turner leaves Boy Meets World because he gets into a motorcycle accident. However, he really leaves because the writers were transitioning the show to focus more on teenagers than adults.

When Does Shawn Move in with Mr. Turner?

Mr. Turner doesn’t die on Boy Meets World though we never find out what happens to him after his motorcycle accident. In his final scene, he indicates his condition by squeezing Shawn’s hand, who sits at his bedside.

Editor’s Note: Mr. Turner later appears in the spinoff, Girl Meets World, though many fans of Boy Meets World have never seen the episodes and are not fans of the sequel, in general.

Who Are Mr. Turner’s Friends on Boy Meets World?

Although their demeanors are opposites, Jonathon strongly reveres George Feeny and looks up to him as a mentor. The colleagues also spend time away from campus, including playing squash games.

As a single man, Jonathon occasionally seeks Alan Matthews’ advice about raising Shawn Hunter. In addition, he attends Alan and Amy’s anniversary party, though Cory and Eric threw it together last minute.

As his teacher and temporary guardian, Turner struggles with defining his relationship with Shawn Hunter. Are they friends? Or is Turner his disciplinarian? While they struggle with this, they do refer to themselves as friends multiple times.

Where Does Mr. Turner Live on Boy Meets World?

Mr. Turner lives in an apartment within a reasonable distance of John Adams High School. We see the inside of Turner’s apartment several times throughout the series and more often after Shawn moves in.

We know that Eli lives in the same apartment building and frequents Jon’s apartment during Season 3. The friends hold a New Year’s Eve get-together in the condo before several ex-girlfriends crash the party.

Editor’s Note: The set used for Turner’s place was reused for Eric and Jack’s off-campus apartment starting in Season 5.

Who Does Mr. Turner Date on Boy Meets World?

Mr. Turner is interested in Kat Tompkins when he notices her in the school cafeteria. He asks George Feeny about her and learns that she’s the new social studies teacher. He soon asks her out, and they hit it off.

Jon and Katherine date for most of Season 2 but decided to break up when Shawn has a crisis. Mr. Turner opens his home to Shawn after his dad drops him off at some fleabag motel. As a result, Ms. Tompkins concludes that Shawn is the commitment he needs right now.

Jonathon dates Kris early in Season 3 and lies to Shawn about going away for the weekend. He wants the apartment for his date with Kris, but Shawn drops by with his date, Veronica — thinking the apartment is empty.

After a short argument, Kris drives Veronica home, and we never see her again. Finally, Shawn and Turner blame each other for the incident before realizing they are both at fault.

Initially, Eli refers to Janine as the “clinger,” and Jonathon says, “she’s ok if your mother’s got plans.” Then, however, Janine crashes their New Year get-together to make them lasagna. Shortly after, Valerie shows up.

Turner dates Valerie for two weeks but breaks up with her for having too much baggage. However, she shows up unannounced to Jon and Eli’s New Year get-together. To her surprise, Janine is already present.

On the same night when Janine and Valerie crash Turner’s New Year get-together, another of his exes shows up at the door crying. Turner remarks that they only went out once, but Lynn insists that he’s being hostile.

Malanie’s relationship with Jonathon pre-dates Boy Meets World. We learn that Melanie and Jon dated as teenagers and grew up in a wealthy Connecticut town to rich parents. All the locals assumed they would get married.

Instead, Turner decided to leave his wealthy parents and start his own life as a school teacher. Fast forward to Boy Meets World Season 3, Melanie leaves several messages on Jon’s answering machine.

Turner eventually agrees to meet her and is shocked to learn that Melanie gave up her inherited wealth. While she still drives a BMW, she gave up her father’s career path and started a bookstore.

Brenda is Amy Matthews’s co-worker, who Amy tries to set up with Jonathon. However, when Amy cancels the setup because of car trouble, Turner gets the message, but Brenda doesn’t. Brenda finds Eric at the house when she arrives and mistakes him for the older teacher.

Even though Eric tries dating Brenda, he realizes they have nothing in common. For example, Eric’s never been to Paris, while Brenda is a wanderlust with extensive traveling experience. He can’t even pronounce her favorite restaurant.

At this point, Eric introduces Brenda to Jonathon, who she was initially supposed to meet. However, while we witness Turner and Brenda’s mutual attraction, Brenda never reappears in the series.

Susan Maguire is Dana Pruitt’s mother. As a divorcee, she makes her availability clear when meeting Turner for the first time. To Shawn’s dismay, the two flirt and banter in front of Shawn and Dana.

Susan is so impressed by Turner that she calls him from the car phone on the way home. The new couple sets up a date which horrifies Shawn. After a great first date, they decide not to pursue the relationship because it’s too awkward for Shawn and Dana.

After splitting with Susan because of the awkwardness it causes Shawn and Dana, Jon decides to get back right back into the dating game.

However, when Dana sees Mr. Turner at Chubbie’s, she notices his date as her aunt. Shawn and Dana start screaming in horror at the sight of Jon with Dana’s aunt, only days after he was dating her mother.

Quinn details his entire Boy Meets World experience on the Pod Meets World podcast, which you can listen to below:

After Cory gets Harley in trouble on the first day of high school, the school bully promises to pound Cory into the ground at 3 PM. Eric initially shows up to defend his brother, but Harley is ready to beat down both.

Just as Cory starts shoving the Matthews brothers, Mr. Turner appears from around the corner and explains to Harley that he teaches English, Lit, and kickboxing.

Harley realizes that he can’t take Mr. Turner and decides to walk away. As a result, Cory survives his first day of high school scot-free.

2) Turner Asks Shawn to Move in With Him

When Chet Hunter leaves Philadelphia to chase his wife Virna, he leaves his son Shawn with Alan and Amy Matthews. Shawn struggles with The Matthews’ strict rules and runs away from their home.

Turner is shocked when a police officer drops Shawn by his apartment. The cop says Shawn was loitering with spray paint outside the high school and, when questioned, claimed that he was staying with Jonathon Turner.

Turner plays along and confirms Shawn’s story, prompting the officer to let Shawn go. Afterward, Jon harshly scolds Shawn but cools down after they discuss the situation. Later in the episode, Turner asks Shawn to move in full-time.

Turner’s best friend Eli worked as a news programmer but left the local station because of ethical differences. So Jonathon gets his buddy an interview with George Feeny to become the new Media Arts teacher.

Although the interview goes terribly in Eli’s mind, Feeny hires him anyway, allowing the two friends to become colleagues. The new teacher adds a lot to John Adams High School and inspires Cory’s interest in film.

Working at the same school allows Jon and Eli to spend more time together. In addition, the two friends bring more personality out of Mr. Feeny, who typically conducts himself rigidly.

After students vandalize George Feeny’s home for refusing to change the finals schedule, the aging educator decides to retire. One of the students refers to him as an old dinosaur, which he takes to heart.

Mr. Turner hears of his decision and visits his home to change his mind. But then, Turner explains that he should not give those goons the power to change his life.

Initially, Feeny refutes him with a garden metaphor but later heeds his advice. Others like Cory contributed to Feeny’s reconsideration, but Turner played one of the most vital roles.

5) Turner Gets Into a Motorcycle Accident

The last we ever see of Turner is in a hospital bed after suffering a motorcycle accident. But, unfortunately, it comes at the wrong time for Shawn Hunter, who recently joined The Centre cult.

Luckily, Cory and Topanga convince Shawn that the cult is terrible for him, and he decides to pray for Mr. Turner. Unfortunately, although Turner squeezes Shawn’s hand on the camera, he never reappears on-screen.

Stuart Minkus references Mr. Turner in the Season 5 Graduation episode; however, it is intended to be an inside joke separate from the show’s plot. Writers never resolve Turner’s plot in the original Boy Meets World series.

2 thoughts on “What Happened to Mr. Turner in Boy Meets World?”