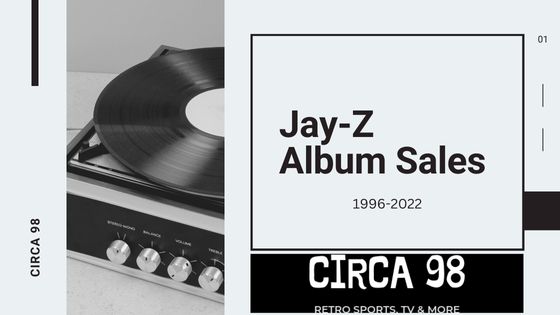 Jay-Z’s debut album did not fare well with first-week sales, moving only 43,000 units in its inaugural week. Yet, ironically, Reasonable Doubt remains one of Jay-Z’s most critically acclaimed albums because of its lyrical depth and cadence reminiscing 90’s golden age hip-hop albums.

As Carter’s popularity ascended in later years, his debut album reached platinum status, selling 1.5 million copies in the U.S. Many newfound fans returned and purchased his first album years after its initial release.

In My Lifetime Volume 1

Despite Carter referring to his sophomore release as his most regrettable album, its commercial success was apparent. The album moved 138,000 units in the first week, nearly tripling the first-week results of Reasonable Doubt.

While the album’s initial success was positive, its critical acclaim fell far short of its predecessor. In retrospect, the album’s quality was significantly lower than Reasonable Doubt. Still, as with all Jay-Z albums, it featured several inspiring tracks.

Jay-Z’s Vol.2… Hard Knock Life, established him as a dominant force in the hip-hop industry. Its 354,000 first-week sales more than doubled that of its predecessor, and the single Hard Knock Life firmly introduced Carter to the mainstream.

Hov’s third album remains his most commercially successful, selling more than 5 million copies in the U.S. Despite its success, several critics fault the album for being too mainstream and lacking the lyrical prowess of Reasonable Doubt.

Vol. 3… Life and Times of S. Carter sold 462,000 copies in its first week, capitalizing on the success of its most recent predecessor. By its release, Jay-Z had cemented himself as the top commercial artist in hip-hop.

Critics once again took issue with Jay-Z’s failure to replicate the lyrical depth of Reasonable Doubt while commending his ability to deliver mainstream hits and secure top-notch features like Juvenile, who was white hot after the release of 400 Degreez.

Overall, Vol.3 sold more than 3 million copies in the U.S.

While its initial commercial success is noteworthy, Jay-Z’s fourth album fails to distinguish itself as one of his best records. Ultimately, Jay-Z’s subsequent releases would reestablish him as the most critically acclaimed artist.

Roc La Familia sold more than 2 million copies in the U.S but failed to reach the 3x platinum status of its most recent predecessor.

Most hip-hop historians consider The Blueprint to be Jay-Z’s best album or at least second to Reasonable Doubt. While its 427,000 first-week sales fell short of Carter’s two previous releases, the critical reception was far more significant.

Ultimately, The Blueprint sold 2+ million copies in the U.S. but remains regarded as one of the greatest hip-hop albums of all time. In addition, the production styles of Just Blaze and Kanye West served as the landscape for the emerging era of hip-hop classics in the early 2000s.

The Blueprint 2: The Gift & The Curse

The sequel to the critically acclaimed The Blueprint outperformed its predecessor in first-week sales with 545,000. But, unfortunately, the album failed to replicate The Blueprint’s critical acclaim and is generally regarded as a letdown.

In some circles, The Black Album is regarded as Jay-Z’s third-best album, which moved 463,000 copies in the first week. It was also rumored at the time to be Carter’s last studio album after having released a new project each year since 1996.

The Black Album sold more than 3.5 million total copies in the U.S, which is good enough for the second most in his solo career. In retrospect, the album generally remains acclaimed by critics, with some disagreement about where it ranks in Carter’s all-time catalog.

After a three-year hiatus from solo albums, Jay-Z returned with the much anticipated 2006 release of Kingdom Come. Fans were eager for a new solo project which explains the 680,000 first-week sales, the most in Carter’s solo career.

Unfortunately, the build-up of Jay-Z’s return did not match its critical acclaim, with most critics deeming the album a letdown. Still, Kingdom Come sold more than 2 million copies in the U.S., reaching double platinum status.

American Gangster is widely regarded as Jay-Z’s most underrated album. Still, it sold 425,000 copies in the first week, due partially to its affiliation with the Denzel Washington movie of the same name.

Its total U.S sales fell short of most of Carter’s previous releases, failing to meet the 1.5 million mark. Still, American Gangster was certified platinum and remains critically acclaimed for its lyrical depth and production style.

Hip-hop fans anticipated the third installment of the Blueprint series, which sold 426,550 copies in the first week. With features from Rhianna, Alicia Keys, Kanye West, and others, the album featured several singles with radio success, reminding the industry of Hov’s dominance.

While the third Blueprint featured multiple critically acclaimed songs, it falls short of classic status for most hip-hop enthusiasts. Because of the bar set by the first Blueprint, it was unlikely Carter would ever again reach that level of acclaim. Ultimately, The Blueprint 3 sold one million+ U.S copies.

After another long hiatus from solo albums (4 years in this case), Jay-Z released Magna Carta Holy Grail, which sold 528,000 first-week copies. The anticipation of Hov’s return to solo work garnered enough attention to rank this album as the fourth most first-week sales of his illustrious career.

Critics generally panned the album deeming Jay-Z in a limbo between his traditional come-up persona and billionaire entrepreneurial status. However, with notable features like Justin Timberlake and Frank Ocean, the album went double platinum by selling over 2 million U.S. copies.

Jay-Z’s surprise return in 2017 with 4.44 sent waves throughout the industry. However, the album’s actual sales are unclear because of the emergence of streaming services like Spotify, Apple Music, and Jay-Z’s own Tidal. Reports estimate that 4.44 sold about 262,000 copies in the first week (though some were purchased for free giveaways).

Critics praised 4.44 as a proper artistic reflection of Jay-Z’s real-life status. Carter was painfully honest throughout the album, opening up about his marriage, childhood trauma, and personal growth. In some circles, critics consider 4.44 one of Jay-Z’s top 5 albums.

4.44 was certified platinum by selling over 1 million copies in the U.S.

What is Jay-Z’s Best Selling Album?