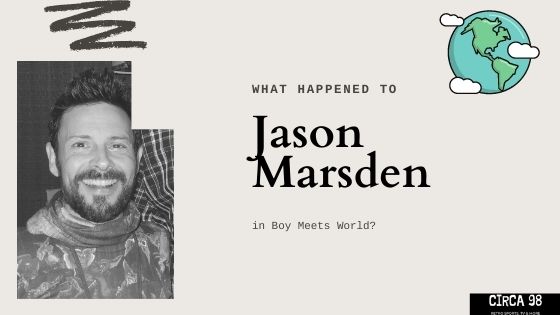 Jason Marsden served as Eric Matthews’ best friend in Boy Meets World during Seasons 1 and 2. Unfortunately, due to Eric’s chronic self-destruction, Jason was often tasked with cleaning up his messes.

Additionally, Jason joined Eric in the good-natured ribbing of Cory and his friends. However, unlike Eric and Cory’s other friends, Jason relentlessly flirted with Amy Matthews, Eric’s mother.

During the early seasons, Eric often found himself in precarious positions, such as trying to learn how to ice skate to impress a girl or getting roped into a modeling agency scam. Though Jason was sometimes the culprit of these predicaments, he often rectified them.

Despite appearing regularly in the first two seasons, Jason disappears without a trace after Season 2, aside from a single reference to his person in Season 3, where he is noted as Rebecca Alexa’s cousin.

Who is Jason Marsden?

When is Jason First Introduced on Boy Meets World?

Jason first appears in Season 1, Episode 16, Model Family, where he encourages Eric to lie about his modeling experience to impress an attractive agent. Unfortunately, the agency turns out to be a scam that misleads models into appearing for circus-like mall activities.

Jason is the cousin of Rebecca Alexa, the supermodel who dumps Eric on New Year’s Eve during Season 3, Episode 10: Train of Fools. Although Jason does not appear in the episode, Eric references him as Rebecca’s cousin and the person who set them up for New Year’s.

Eric is Jason’s best and only friend (that we know about). The two are often seen in the John Adams High School hallways flirting with girls or making fun of Cory and Shawn. Jason is also a frequent visitor of The Matthews home, where he regularly flirts with Amy.

Who Does Jason Marsden Date in Boy Meets World?

Jason Marsden dates Tracy, Desiree Beaumont, and Valarie Stevens. However, none of the relationships last for more than one episode, and the latter two only emerge following Eric’s flameouts with the same women.

Jason possibly dates Tracy in the Season 1 episode; It’s a Wonderful Night though it’s unclear whether he dates Tracy or her friend, whose name is never revealed. Jason and Eric go on a double date with the two women despite Eric failing his driver’s test earlier.

Jason convinces Eric to lie about the test to hold the date with the two women. Unfortunately, their car gets impounded, and Eric cannot retrieve it without his license. Tracy and her friend laughingly dump the pair and decide to go out with another student.

Jason briefly dates Desiree Beaumont after convincing Eric to dump her in a strange turn of events. While Desiree dated Eric, she often mocked and emasculated Jason while forcing Eric to attend to her at all times.

Despite her frequent humiliation of Jason, he cannot resist the opportunity to date her once Eric moves on. Desiree is probably the most attractive woman in all of John Adams High School, so Jason decides dating her is worth his self-deprecation.

Like Desiree, Jason dates Valarie after Eric splits with her. However, Jason causes Eric’s split with Valarie through his diabolical scheme. At the beginning of the episode, Valarie clarifies that she spends all her free time at the skating rink, prompting Jason to lie on Eric’s behalf.

Initially, Eric is furious with Jason and explains that he’s never ice-skated before in his life. Jason solves the problem by giving him a learn to skate in your sleep cassette tape. However, the cassette is a dubbed over weight-loss tape re-recorded by Jason himself.

Although the cassette works in helping Eric learn how to skate, he becomes afraid of food simultaneously. Jason takes advantage by offering Eric a hot dog at the end of his skating date with Valarie. When Eric starts acting weird, Valarie dumps him and dates Jason.

The storyline never explains Jason’s sudden absence, though Eric references him once more in Season 3 as Rebecca Alexa’s cousin. We can assume that Jason moved away from the school district, as we never again see him in John Adams High School.

Where Did Jason Live in Boy Meets World?

Jason’s house never appears on Boy Meets World, and he never mentions where he lives. However, we can assume that he lives within walking distance of The Matthews’ house, as he frequently appears there in the first two seasons.

Jason Marsden (the actor) alludes to his character’s disappearance on the Pod Meets World podcast, citing perceived scheduling conflicts as a reason why he didn’t return for more episodes. However, he disagreed with that perception from the BMW producers, insisting he was available to do more episodes.