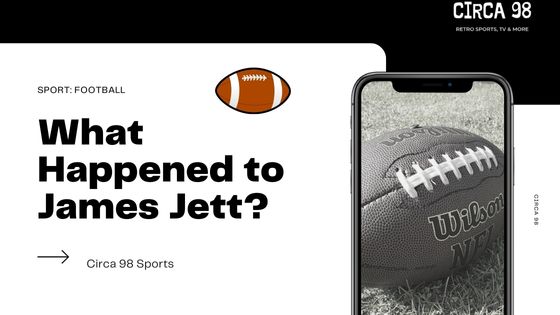 In this post from Circa 98, we will tell you what happened to James Jett in 1998. In the ’98 season, James Jett started in all 16 games. His 45 receptions and 882 yards provided a spark for the Oakland franchise. Flanked by Hall of Famer Tim Brown, Jett set a career-high in receiving yards thanks partly to QB Jeff George’s strong arm.

Though the Raiders improved dramatically from the previous season, under the tutelage of rookie head coach Jon Gruden, their 8-8 record was not enough to secure a playoff spot. An injury to Jeff George sparked a four-game losing streak late in the season, effectively ending all hope of a postseason birth.

Though Jett faced frequent criticism for his allegedly questionable hands, the speedster was generally considered a quality receiver by analysts, scouts, and, most importantly, his peers. Jett was not a volume catcher but instead a big-play threat.

Raiders owner Al Davis was known to have a particular affinity for Jett because of his track & field level of speed. Raider’s folklore describes an incident where Al Davis asked Jon Gruden, “did you feel that?” after Jett ran a go-route by the sideline where they stood.

The question Davis posed was about Jett’s blazing speed and its tangible effect on those standing nearby. Playing alongside Hall of Famer Tim Brown allowed Jett to win one-on-one matchups down the field.

Despite rumored disagreements between Davis and Gruden about Jett’s value, he remained a member of the Raiders for the rest of his career, which lasted through 2002. Jett remained a starter opposite Tim Brown through the 2000 season, though his numbers declined progressively, due in part to Rich Gannon’s replacement of Jeff George as the starting QB.

While Gannon found more success in terms of wins and losses, his playstyle was catered to the “West Coast offense,” which sharply contrasted George’s focus on the vertical passing game. In 2001, James Jett was replaced in the starting lineup with Hall of Famer Jerry Rice, who signed with Oakland as a free agent. He would still play in 11 games during the ’01 season but played in only one game the following season (2002), his last as a professional.

Was James Jett Part of the “Tuck Rule” Game?

Yes. James Jett was an integral figure in the tuck rule game between Oakland and New England on January 19, 2002. He opened the game’s scoring with a 13-yard touchdown reception from Rich Gannon to put his team up 7-0 in the first quarter. He ended the game with two receptions for 23 yards as the Raiders lost 16-13 after one of the most controversial calls in NFL history.

Raiders CB Charles Woodson appeared to have stripped Tom Brady and caused a fumble that the Raiders recovered. However, upon further review, the referees determined the play was an incomplete pass. Theories about the motives of the NFL’s overturning have circulated for years. The league was known to have bad blood with Raiders owner Al Davis, who had sued them decades prior.

What Was James Jett’s 40 Time?

Conflicting reports dispute Jett’s exact 40 time. He is believed to have run a timed 40-yard dash on several occasions, including the 1996 Fastest Man Competition, in which he reportedly ran a 4.27. Combine records from 1993 list his time at a mediocre 4.49, though a 3rd party does not verify them.

The NFL Scouting Combine was less publicized during the early 90s, and there is no archival footage to investigate the number further. Rumors about Jett’s fastest 40 time have become part of Raider’s folklore, with some fans insisting he ran a 4.19 on at least one occasion.