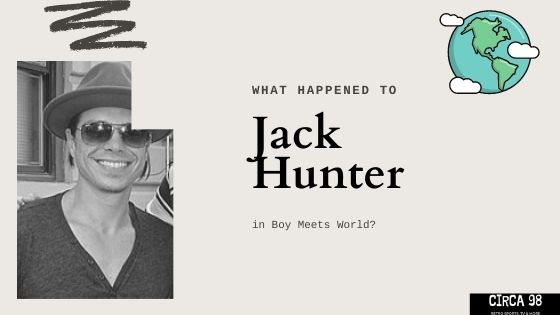 Throughout his three Boy Meets World Seasons, Jack Hunter immerses himself in multiple storylines, including his reunion with his estranged brother Shawn, his relationship with Rachel, and his father Chet’s death.

Who is Jack Hunter?

Jack Hunter is a Boy Meets World character who first appears during Season 5. However, his relationship with the show predates his initial appearance, as he is Shawn Hunter’s estranged half-brother.

Jack attends Penbrook University in Philadelphia, where he rooms with Eric Matthews in an off-campus apartment. He becomes close friends with Eric and, later, Rachel, who moves into the apartment shortly after.

Despite being known for his rich-boy persona, Jack joins the Peace Corps after college with his ex-roommate and ex-girlfriend, Rachel Mcguire.

How is Jack Introduced on Boy Meets World?

Jack runs into Cory at Chubbie’s after Cory sets out to find Eric a roommate so that he can move out of The Matthews’ home and Cory’s room. Cory determines Jack and Eric to be an excellent fit for roommates.

However, things turn tense when Shawn enters Chubbie’s and questions why Jack is there. Unbeknownst to Cory, Jack is Shawn’s older half-brother, who moved away from the trailer park when they were kids.

Shawn resents Jack because he was raised rich with a corporate-elite stepfather while Shawn suffered through a challenging childhood in the trailer park. Cory reasons with Shawn to give Jack another chance.

Who Does Jack Date on Boy Meets World?

Jack dates Rachel Mcguire during Season 6, shortly after his father dies. The couple comes together as Rachel helps Jack grieve while Eric stays occupied with the birth of his new baby brother.

Before Rachel chooses Jack, both Jack and Eric demonstrate an interest in their roommate and often compete for her attention. Jack and Rachel split up before Season 7 but remain close friends for the remainder of the series.

One incident threatens their friendship when Shawn has a provocative picture of Rachel blown up for display at the student union. Rachel realizes that Jack must have shared the private photo with his brother.

Eventually, they work things out, and Jack and Rachel remain close. Then, in the series finale, Jack and Rachel decide to join the Peace Corps together, much to the surprise of Jack’s other friends and acquaintances.

Jack briefly dates Wendy, his neighbor from apartment 3B though a relationship never materializes. However, their connection sparks conflict between Jack and Shawn after Shawn connects with her subsequently.

Jack and Eric go on a double date with Penbrook students Jill and Carol, though it becomes evident that Jill is more compatible with Jack and Carol with Eric. However, when the boys point this out, the girls dump them.

Jack dates a witch named Millie during the episode The Witches of Penbrook. Millie asks Jack to see his apartment, and the two hit it off. It soon becomes clear, however, that Millie is attempting to sacrifice Jack.

Editor’s Note: Because of her presence in an alternate reality, it is unclear whether the Millie character exists in the series’ broader universe

Who Are Jack’s Best Friends on Boy Meets World?

Eric is Jack’s best friend and roommate, and their friendship continues throughout the remainder of the series. However, despite their loyal bond, Jack grows to view Eric as an idiot as his character drifts into absurdity.

Since the two friends do everything together, including going on dates and posing as women, their appearances on the show often come simultaneously. Jack is perceived as the cool friend, with Eric the loser.

In some cases, Jack must look out for Eric, who is both gullible and nieve. However, Goerge Feeny teaches Jack a valuable lesson about how Eric must influence him as well. Jack sees the world as a cold-hearted place, and Eric reminds him that people can be well-intentioned.

Jack becomes friendly with Cory, who he first meets at Chubbie’s before running into his estranged brother, Shawn. Since Jack initially rooms with Eric and Shawn, Cory naturally visits the apartment with frequency.

Cory even films a documentary about Jack’s life along with his roommate Eric and brother Shawn. Although Jack and Cory are never particularly close, they spend a lot of time together and maintain a cordial friendship.

Jack and Topanga are mostly acquaintances until Jack catches the chicken pocks, and Topanga nurses him back to health. After Topanga helps him recover, the two grow a closer bond that lasts the rest of the series.

Angela and Jack grow friendly as they exist in the same social circles, with Angela dating Jack’s brother and Jack dating one of Angela’s closest friends. In addition, Angela, Shawn, and Jack sometimes attend nightclubs together.

Who Are Jack’s Family Members on Boy Meets World?

Shawn is Jack’s half-brother, and as Lil Wayne once said, “same father, different mother.” Shawn harbors resentment towards Jack since he grew up wealthy after his mother left Chet for Jack’s richer stepfather.

Despite the emotional conflict, Jack and Shawn grow to respect one another and become a family. Shawn even rooms with Jack during his first Penbrook year at the request of their father, Chet.

Jack’s estranged father, Chet, renews his relationship with his son after Jack moves back to Philadelphia for college. Chet insists that his other son, Jack’s brother Shawn, move into Jack’s new off-campus apartment.

Chet gets to know Jack better after visiting Penbrook and spending time with his two sons. Unfortunately, Chet passes away from a heart attack shortly after eating Rachel’s homemade cake. Jack grieves significantly about not getting to better know his father.

Eddie Hunter is Shawn’s other purported half-brother, though we can’t know his relation to Jack. However, it is possible that Jack’s mother also birthed Eddie, which would make Jack and Eddie full brothers.

However, the more likely scenario is that Jack and Eddie are half-brothers who share the same father in Chet. Unfortunately, Eddie never reveals which of Shawn’s parents he shares, making it impossible to confirm his relation.

The third possible scenario is that Jack and Eddie share no blood relation. In this case, Eddie would have a different father from both Shawn and Jack but share Shawn’s mother. Later in the series, things are further complicated when we learn that Virna is not Shawn’s real mother.

Editor’s Note: Eddie only appears in one episode during Season 3, and Shawn never again mentions him

Where Does Jack Live on Boy Meets World?

Jack lives at the off-campus apartment until Rachel kicks him out at the onset of Season 7. Then, he briefly lives with Eric in the dorm rooms before moving back into the apartment after Topanga marries Cory.

Angela and Shawn briefly live in the apartment together but decide it’s too soon to live together. As a result, Jack, Eric, and Shawn reunite as roommates in the same apartment they occupied during Season 5.

Editor’s Note: The apartment set is identical to the one used for Jonathon Turner’s place in Seasons 2-3

After enrolling in Penbrook University, Jack scores a lovely apartment off-campus and seeks out roommates at Chubbie’s. When he arrives at the hangout, he runs into Cory and his long-lost half-brother, Shawn.

Of course, Shawn is disturbed to see his brother, as Shawn assumed their estrangement was intentional on Jack’s part. Still, Jack stops by Chet’s trailer to say hello to his birth father, who he had not seen in several years.

2) Jack Reunites with Shawn and Chet

Shawn initially neglects to tell his father about Jack’s arrival. Later, Jack shows up at the trailer park, much to Chet’s surprise. Despite Shawn’s protests, Chet encourages Shawn to room with Jack, who promises to cover the rent for his younger brother.

Chet ultimately donates a toaster to the new apartment, and Shawn accepts his new family member. Finally, Chet and Alan Matthews help their sons move into the apartment as they become functioning adults.

3) Jack Rooms With Eric and Shawn

After Alan and Amy force Eric to leave their home, Eric decides to room with Jack. Since Shawn will serve as the other roommate, the three friends live together off-campus.

But, of course, Shawn remains in high school while Jack and Eric attend their first college semester. Since Shawn lives in the apartment, Cory frequently visits to hang out with his best friend and brother.

When Rachel first moves into the apartment (to replace Shawn), Jack and Eric attempt to win her over. In some ways, Jack and Eric look at their respective courtships as a competition.

Ultimately, Jack wins out and starts dating Rachel in the second half of Season 6. But, of course, the stimulus for their relationship is Chet’s sudden death, which allows Jack to confide in Rachel, who takes pity.

However, their relationship doesn’t last too long, and they break up in the Season 7 premiere and are just friends afterward.

In a strange turn of events, Jack decides to join the Peace Corps (or Peace Core, as they pronounce it) with Rachel. Jack’s previous plan was to work for his father’s company and inherit a lifetime of high-paying positions.

The decision is very off-brand for Jack, who had never once shown an interest in volunteering or philanthropy.

Are Jack and Shawn Brothers?

Jack and Shawn are half-brothers as they share the same father but have different mothers. The two became estranged when Jack moved away with his mother and stepfather and lost touch with Shawn and Chet.

Is Jack Shawn’s Only Sibling?

In Season 3, Shawn runs into another supposed half-brother, Eddie, who beats up Cory for filming his computer theft. However, Shawn never mentions either sibling again.

What Episode Does Jack come in Boy Meets World?

Jack appears in Boy Meets World for the first time in Season 5, Episode 1: Brothers. He runs into Cory at Chubbie’s while seeking new roommates for his off-campus apartment. Shortly after, he sees his half-brother, Shawn.