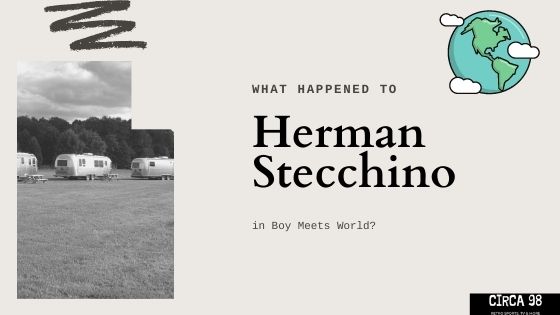 As the younger brother of a previously established character, Herman starts with a distinct advantage compared to other guests. Of course, his graceful demeanor helped solidify his character immediately.

The youngster’s poetic charm, affiliation with Frankie and Vader, and presence in the trailer park make him one of the more memorable Boy Meets World characters during Season 4.

Who is Herman Stecchino?

Herman Stecchino is Frankie’s younger brother and Vader’s son, who appears in three episodes during Season 4. Herman, like his brother, is poetic and philosophical, demonstrating intellectual maturity for his age.

When Does Herman First Appear in Boy Meets World?

In Season 4, Episode 4, Fishing for Virna, he first appears when Frankie asks the Hunters to watch his more youthful sibling while he buys a quart of milk. Unfortunately, Herman goes on to steal Chet’s shampoo before Frankie forces him to return it and make an apology.

Who Are Herman’s Family on Boy Meets World?

Herman’s older brother Frankie appears in Boy Meets World throughout Seasons 2 through 5 and is considered one of the most recognizable guest characters. Frankie’s influence over his younger sibling is apparent, as both Stecchino’s show an affinity for poetry.

Herman’s father, Frankie Sr., is the WWF pro wrestler Vader. Herman promises his father that he will carry on the Stecchino wrestling tradition and starts training in the gym. It’s clear, however, that Herman does not share his father’s aggressive demeanor, much like his brother.

Though we never learn Mrs. Stecchino’s first name, Mr. Feeny relays how sorry he is that she has to put up with such an insane family. Unfortunately, Herman and Mrs. Stecchino never appear on-screen together.

Where Does Herman Stecchino Live on Boy Meets World?

Herman lives in the trailer park with his brother Frankie and dad Vader. However, their living situation makes little sense with context. As the son of a famous professional wrestler, who appears on-screen in a match against Jake The Snake Roberts, they could afford a home.

Who Does Herman Stecchino Date on Boy Meets World?

In Season 4, Episode 10 Turkey Day, Herman visits The Matthews’ home to ask Alan for permission to date his daughter, Morgan. Herman outlines the date to Morgan as an after-dinner piece of pumpkin pie.

When The Matthews’ family ends up leaving Chet’s Thanksgiving feast early, Morgan, Cory, and Eric decide to have their full Thanksgiving dinner with Herman and Frankie, thus extending the date further.

Why Does Herman Steal Chet’s Shampoo?

Herman had a habit of stealing things from neighboring trailers, and some might call him a kleptomaniac. So when Frankie brings him by The Hunter’s trailer to return the shampoo, he alludes to making other visits.