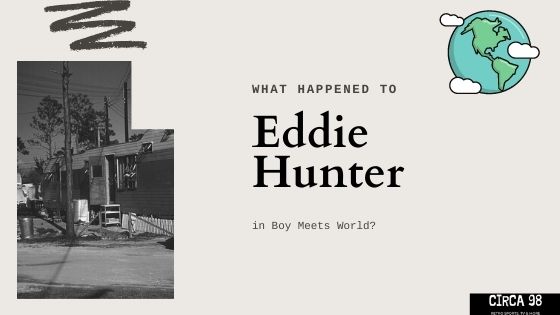 Boy Meets World has its share of overlooked characters, but none is perhaps more worthy of discussion than Eddie Hunter. As Shawn’s less-heralded half-brother, Eddie represents a forgotten class in Boy Meets World.

Viewers first see Eddie at the trailer park where Cory and Shawn visit to film a video birthday letter for Chet. Eddie asks Shawn why he can’t be in the video, but Shawn blows him off.

Later on, Shawn and Cory notice Eddie in the film’s background with a stolen laptop. Cory wants to enter the video into a student news contest, but Shawn destroys the tape. Cory later returns to film Eddie in the act.

Eddie notices Cory filming him from behind a bush and plans to assault him and destroy the tape. However, Shawn shows up to protect his friend Cory. Eddie questions how Shawn can sell out his brother to no avail.

Who is Eddie Hunter?

Eddie Hunter is a Boy Meets World character who appears as Shawn’s half-brother in one Season 3 episode. Eddie lives in the same trailer park that Shawn lived in before moving in with Mr. Turner.

How is Eddie Hunter Introduced on Boy Meets World?

Eddie first appears when Cory and Shawn visit the trailer park to film a video letter for Chet Hunter’s birthday. Next, Shawn gathers some of his relatives, such as Uncle Mike, to appear in the video.

After Cory wraps up filming, Eddie shows up with three goons, including an 11-year old delinquent. He inquires why Shawn left him out of the video. Cory suggests adding Eddie to the video, but Shawn has no interest in including his half-brother.

Editors Note: Chet is out of town chasing Virna on his birthday, which is why Cory and Shawn are filming the video letter

Who Are Eddie Hunter’s Family on Boy Meets World?

Eddie and Shawn both admit to being half-brothers during the episode though it is unclear which of Shawn’s parents is related to Eddie. Of course, things are further complicated in Season 7 when we learn that Virna is not Shawn’s birth mother.

Eddie may be Virna’s son, in which case Shawn is not related to him after all. However, the more likely scenario is that Eddie is Chet’s son seeing that Chet was known to sleep with many women.

Although it is never confirmed or refuted, Eddie is likely Chet’s son, seeing that he lives in the same trailer park. Chet never mentions Eddie throughout the series and does not appear in Eddie’s only episode.

If Chet is Eddie’s father, then Jack Hunter is his half-brother. We learn in Season 5 that Jack is Chet’s son and Shawn’s half-brother, which would make all three of them brothers. Jack never mentions Eddie, however.

Does Eddie Hunter Get Arrested on Boy Meets World?

We don’t find out whether or not Eddie gets arrested for stealing computers. However, we know that Cory preserved the tape of Eddie transferring the laptops to his trailer and plans to enter a news contest.

Are Eddie and Shawn Hunter Blood-Relatives?

Shawn and Eddie are likely half-brothers by blood, though the possibility remains that they aren’t blood-related. It’s wise to assume that Chet is Eddie’s father, which would make him Shawn’s half-brother.

However, we learn in Season 7 that Virna is not Shawn’s birth mother, which would negate his relation to Eddie if he is the birth son of Virna.

Is Eddie Related to Jack Hunter?

Suppose Chet is Eddie’s father. In this case, Eddie is Jack’s half-brother. However, if Virna is Eddie’s mother, Jack is not related since he has a different birth mother.

Where Does Eddie Hunter Live on Boy Meets World?

Eddie Hunter lives in the trailer park near Uncle Mike. Shawn and Chet previously lived in the same trailer park and returned to it late in Season 3. Despite their return, Eddie never reappears on-screen in the series.