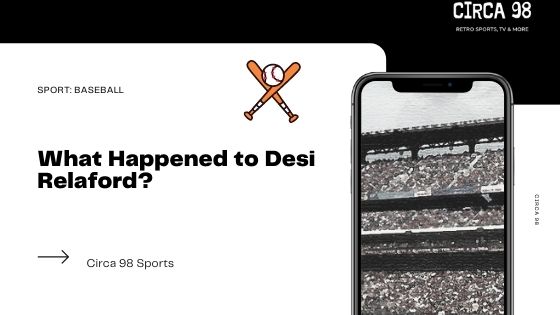 Desi Relaford set his career-high for games played in 1998, playing 142 of 162 contests, all at the Shortstop position. Known as a defense-first player, Relaford struggled at the plate, batting .242 with 1 HR and 26 RBIs. The Phillies starting SS also swiped nine bags in 14 attempts while receiving positive reviews for defensive range and arm strength. Still, he made 24 errors overall.

Relaford’s Phillies team played competitive baseball but failed to make the postseason, finishing at 75-87, good enough for 3rd in the National League East. Relaford formed a double-play combination with Mark Lewis, who started the majority of games at Second Base. The team’s manager, Terry Francona, would later become one of the most successful MLB managers.

What Happened to Desi Relaford After 1998?

Relaford returned as the Phillies SS in 1999 though he only played in 65 games for the club due to injury. Overall, Desi hit .242 with 1 HR and 26 RBIs, and his team once again finished in 3rd place in the NL East.

After the transaction, he failed to perform with the Padres, batting only .204 with 2 HRs and 16 RBIs.

The New York Mets claimed Relaford off waivers from the Padres, and Desi enjoyed the best season of his career serving as a utilityman for manager Bobby Valentine. Relaford hit .302 with 8 HRs and 36 RBIs as his team finished 82-80.

In addition, the former SS showed his defensive versatility by splitting time between 2B, SS, and 3B and pitching one scoreless inning.

The Mets traded Relaford to the San Francisco Giants, with Tsuyoshi Shinjo for Shawn Estes in a surprise move. Mets fans had grown fond of Desi and Shinjo, and the trade rubbed the fanbase the wrong way.

Ironically, Desi never played a game for San Francisco, who rerouted him to Seattle for David Bell before the season. Desi played mediocrely and hit .267 with 6 HRs, 43 RBIs, and 10 SBs. The utility man expanded his versatility further by playing RF and LF in addition to SS, 2B, and 3B.

Desi became a free agent and signed a two-year deal with the Kansas City Royals, serving as a utility player. Relaford got off to a great start in 2003 but slowed considerably.

Overall, Relaford finished batting .254 with 8 HRs, 59 RBIs, and a career-high 20 SBs. The utility man played SS, 2B, and 3B and all three outfield positions, including his first appearances in CF.

Relaford’s second Royals season was less productive, and his average dipped to .221 while only stealing five bases and hitting six home runs. He once again played every position besides C, 1B, and P. His Royals team finished with an abysmal record of 58-104, good enough for worst in the American League.

Once again, a free agent, Relaford, signed with the Colorado Rockies, where he struggled to produce before the team released him on July 31, 2005. Overall, Desi hit .224 with 1 HR and 16 RBIs while mainly playing SS and 3B.

He did appear in the outfield occasionally, though less frequently than with Kansas City. Relaford finished the season with Toronto’s AAA affiliate but failed to produce at the minor league level.

Relaford failed to appear in an MLB game during the 2006 season but did play in 11 AAA games with the Memphis Redbirds (St. Louis Cardinals AAA affiliate). Unfortunately, Desi hit only .121 over that span, and the team released him before the season ended.

Desi signed a minor league deal with the Texas Rangers, where he improved his AAA performance, hitting .266 with 6 HRs and 52 RBIs over 88 games. His performance was impressive enough to earn him a call-up to the Texas Rangers MLB club, where he played his final 14 professional contests. Desi batted .115 with no home runs, appearing at 2B and LF.

What Teams Did Desi Relaford Play For?

What Positions Did Desi Relaford Play?

Relaford played SS, 2B, 3B, CF, RF, and LF while also appearing in one game as a pitcher, striking at one batter over one scoreless inning. A versatile defender, Relaford appeared most frequently at Shortstop, his natural position.