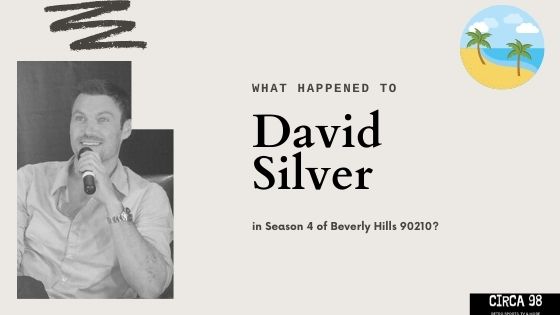 Season 4 was an interesting year for David Silver. He entered California University with his friends, moved into an off-campus beach apartment, and got hooked on meth. David also returned to his true passion; music. After getting a break in the music business, David cheats on Donna with his A&R, Arial, ending their relationship. The good news is that he meets Babyface in the process.

How is David Introduced in Season 4?

David shows up at Brenda’s going away party on the beach. Steve and Brandon scored a party house from one of Rush’s big shot business partners. David asks Brandon where he plans on living once school starts at which point Brandon explains that he’s living at his parent’s house. Steve gets the same question and responds in typical Sanders fashion by berating David and telling him to “perish the thought.”

This is just the beginning of a crazy season for David. Here’s what happened next:

He Rents a Beach Apartment with Kelly and Donna

David asks Kelly (his stepsister) to help him look for an apartment. They find a really nice one on the beach. Yet, David knows he cannot afford it by himself. Kelly offers to be his roommate but then Donna (his girlfriend) wants to live with Kelly too. They end up with the upstairs apartment which is 3 bedrooms. Donna’s parents are not informed since they would not approve of the arrangement.

He Lands a College Radio Gig with Donna

David’s passion is radio and music. He and Donna ran the station at West Beverly High and hope to continue at California University. They convince the station manager to give them a time slot. Unfortunately, it is the graveyard shift when nobody is listening. Worse yet, it prevents David and Donna from getting and sleep. As a result, David’s grades suffer and Donna eventually quits the station.

He Gets Hooked on Meth

The graveyard shift is brutal for David who struggles to maintain classwork and radio. Howard, his station manager, offers him caffeine pills to help him out. Soon Howard gives him something a bit stronger — meth. David gets hooked on it quickly and needs it to get through his days. His radio monologues become existential conspiracy rants that alarm his friends. Howard gets annoyed when David keeps asking for drugs and says “you don’t have a drug problem, you have a problem getting drugs.” Howard later boots him from the radio show.

He is Nearly Arrested

David is forced to find a new supplier. A student in Andrea’s dorm is a campus kingpin of whom David becomes closely acquainted. When rumors of a drug bust circulate throughout the dorm, this student asks David to hold his drugs for a while. David brings them to the beach apartment while the police bust the dorm. David calls Dylan and asks what to do. Dylan comes over and helps him flush all the weight down the toilet. Right after they dispose of the drugs, cops barge into the apartment with a search warrant. We can assume the kingpin ratted out David during an interrogation.

He Lets his Sister Erin Wander Off

David is babysitting his sister Erin when he falls asleep after a drug-induced crash. He had just stolen codeine pills from his father’s dental office earlier that day. Erin wanders off at the park before Kelly shows up. When they realize Erin’s missing, they call the police. It turned out that Erin ended up with a nice lady working nearby. The woman didn’t speak English which is why it took a while to find her. David promises never to use drugs again. Unfortunately, he can’t keep that promise.

More About David Silver in Season 4

Where Does David Silver Live in Season 4?

David lives at the beach apartment with Donna and Kelly (his girlfriend and stepsister). Donna’s parents are unaware of the arrangement until they catch him at the complex one night. Donna and Kelly briefly move out when David is hooked on meth. A dog named Rocky II later joins the trio at the apartment. Rocky II is named after the dog Rocky, who died after being experimented on in the CU laboratory. David gets mad at Rocky II for urinating all over the carpet. He even answers the phone with “Rocky’s toilet, may I help you?”

Who Does David Silver Date in Season 4?

David dates Donna, Arial, and his piano tutor. Donna was his girlfriend going into Season 4, and they continue dating throughout most of the season. He takes his piano tutor on a date without telling Donna. The tutor is a blind woman who inspires David’s reintroduction to music. Towards the end of Season 4, David engages in a physical relationship with Ariel, his A&R. The relationship is purely physical but Donna catches them in the act. The revelation ends David and Donna’s relationship.

Who Are David’s Best Friends in Season 4?

David’s best friends are Howard and Happy Jack. Howard introduces him to meth but later sours on him for becoming a junkie. Happy Jack is a fellow student and drug addict who hangs around with David until the drug bust. Steve spends less time with David than usual because he’s in the Keg fraternity. As a result, David’s friend group does not include main characters. Still, his relationship with Dylan grows after Dylan helps him flush the product before the cops show up. Brandon and Brenda are also friendly with him.