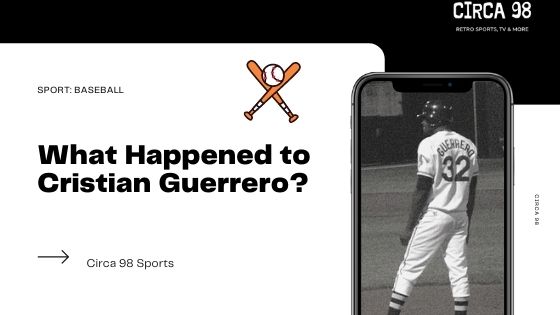 Cristian Guerrero played for the DSL Brewers in 1998 after getting signed as an international free agent one year earlier. The younger cousin of MLB players Vladimir and Wilton Guerrero, Cristian worked to live up to his family’s legacy. In his Rookie Ball debut, Guerrero enjoyed a solid season hitting .268 with 5 HRs and 37 RBIs over 64 games. The 17-year old quickly established himself as a top 10 prospect in the Milwaukee Brewers farm system.

An outfielder by trade, Guerrero stood at a towering 6’7 making him one of the tallest professional ballplayers. Playing predominantly RF, Cristian drew comparisons to his cousin Vladimir who shared similar physical characteristics and mannerisms. However, Cristian occasionally played CF and LF, as well, much like his other cousin Wilton. By 1999, Guerrero appeared to be on the fast track to Major League Baseball.

What Happened to Cristian Guerrero After 1998?

Guererro played for the Ogden Raptors, another Brewers rookie league affiliate, and improved his batting average, slugging percentage, and stolen base total. The 18-year old swiped 26 bags in 65 games while only getting caught two times.

Guerrero returned to Ogden for his 3rd professional season, where he really took off as a prospect. In the year 2000, Cristian hit .341 with 12 HRs, 54 RBIs, and 24 SBs. Guerrero’s performance earned him a call to the Low A affiliate Beloit Snappers, but he struggled with the transition, hitting only .164 in 55 ABs.

Guerrero joined the High Desert Mavericks (Brewers Class A affiliate) in the California League, where he hit .312 with 7 HRs and 41 RBIs. His numbers suggested that last year’s struggles with Beloit were a mirage and that Cristian was back on track to reach the big leagues.

Guerrero joined Milwaukee’s Class AA affiliate Huntsville Stars in 2002. Typically, AA determines whether or not a prospect will make it in the MLB. At age 21, Cristian appeared primed to showcase his immense talents in a more competitive forum. Unfortunately, the slugger struggled mightily, slashing only .223/.274/.332 over 111 games. As a result, the 2002 season essentially cost Guerrero an MLB career.

In 2003, Guerrero reiterated his sharp performance contrast between High A and AA, when he once again dominated High A pitchers but failed to hit against AA pitchers. The Brewers finally pulled the plug in May 2003 by placing him on waivers. The Seattle Mariners claimed Guerrero and sent him to High A ball, where he hit .278 with 9 HRs and 38 RBIs for the Inland Empire 66ers.

Guerrero returned to AA ball in 2004 for the Seattle Mariners affiliate San Antonio Missions. Unfortunately, Cristian once again struggled with AA pitching, hitting only .224 over 56 games. On June 28, 2004, Seattle traded him to the Anaheim Angels for RHP Austin Bilke to join his older cousin Vladimir in the Angels organization. Guerrero immediately joined Anaheim’s AA affiliate Arkansas Travelers, where he improved his numbers by hitting .274 with a .751 OPS.

Despite an improved AA performance in the tail-end of 2004, the Angels failed to re-sign Guerrero and instead granted him free agency. As a result, Cristian signed on with the Montreal Expos organization (where his cousins played previously) and joined their Class AA affiliate, the Harrisburg Senators. Guerrero hit .267 with 16 HRs and 56 RBIs, earning him a call to the AAA affiliate, New Orleans Zephyrs. Cristian only had 16 ABs in AAA and hit one home run with four total hits.

Guerrero returned to Harrisburg in 2006 but failed to replicate his performance from the year before. Cristian’s OPS dipped 20 points, and he was eventually reassigned to Class A Potomac, where his numbers regressed even more, down to .652 OPS. The Nationals granted him free agency after the season but decided to re-sign him later.

Guerrero re-signed with the Nationals (formerly Expos) organization on March 21, 2007. Unfortunately, his second stint with the organization lasted only a few months. Cristian split time between Harrisburg and the AAA affiliate Columbus Clippers but failed to emerge as a viable prospect, now 26-years old. As a result, the Nationals released him in June 2007, and he would never again join an MLB organization. Instead, the former prospect signed on with the Camden Riversharks, where he batted .290 with 7 HRs over 43 games.

Cristian Guerrero continued to play independent baseball through 2013 and enjoyed immense success for various teams. In 2010, Guerrero tied an all-time baseball record (with Corey Parker) by hitting 5 HRs in five consecutive ABs for the Gary SouthShore RailCats. After the 2013 season, Guerrero retired from baseball at age 32.

What Teams Did Cristian Guerrero Play For?

What Positions Did Cristian Guerrero Play?

Like his cousin Vladimir, Guerrero mostly played RF but occasionally played CF and LF as well. He also appeared as a pitcher during one game in 2005.