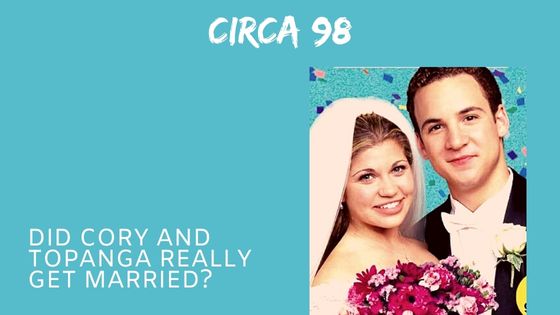 Cory and Topanga are fictional Boy Meets World characters. They get married during Season 7 of the Boy Meets World series and later reprise their roles as a married couple in the spinoff Girl Meets World. However, the actors who portray these characters never actually got married.

Did Cory and Topanga Get Married in Real Life?

Ben Savage, who played Cory Matthews on Boy Meets World, did not marry his co-star Danielle Fishel, who plays Topanga Lawrence. As far as we know, Savage never married anyone and remains single. On the other hand, Danielle Fishel is now on her second marriage, tying the knot with Jensen Karp in 2018.

Danielle Fishel has publicly stated that she briefly dated Ben Savage during the early Boy Meets World seasons. But, as she explains, the relationship never materialized romantically, though they remained friends off-set. Ben also accompanied Danielle to one of her school dances as a friendly gesture.

What Episode Do Cory and Topanga Get Married?

Cory and Topanga get married in Season 7, Episode 7: It’s About Time. The characters were engaged since the Season 6 premiere, His Answer but postponed their wedding several times because of family concerns.