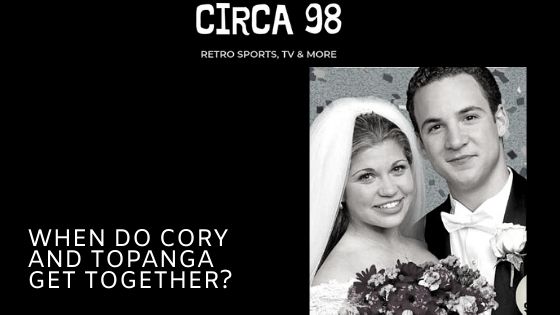 Cory is assigned to work with Topanga on a school project. Since during Season One, Topanga is considered strange, the idea of working with her displeases Cory. Topanga visits The Matthews’ home, where they work on the project. At the end of the episode, Topanga kisses Cory while he’s handcuffed to his locker. The writers bill the incident as Cory’s first kiss.

Oddly enough, Topanga does not even appear in the next several episodes, and when she does return later in the season, the two are not a couple.

When Shawn starts dating his classmate Hillary, Cory gets jealous and decides to pursue a date. After consulting with Minkus, he approaches the only girl he knows, Topanga. He first asks her to Burger World, but when she points out her vegetarianism, he agrees to take her to the International House of Salads.

When Alan and Amy learn of his motives, they tell him to cancel for Topanga’s sake. He lies and claims to have the flu, which inspires her to show up at his house with tea. Cory teaches her to shoot baskets with laundry, and she suggests Mother’s Day gifts.

Cory attends a makeout party where students are chosen randomly to make out with each other in the closet. Before the party, Cory’s brother Eric psyched him into believing he would “choke” at the party. When Cory and Topanga are assigned to each other, they spend their time talking instead of kissing.

When the rest of the class learns that Cory didn’t kiss Topanga, they tease him incessantly. Cory’s parents learn of Eric’s involvement and force him to help Cory resolve his reputation. Eric recommends bringing Topanga to a poetry reading which he does, and he ends up making out with her.

The last scene of the episode shows Topanga walking by Cory’s lunch table with her friends. She says hi, and all the friends laugh. It appears from this that they are at least dating, but by the next episode, Cory is already dating another girl.

Season three starts with Cory’s intent on asking Topanga to be his girlfriend. Since he gets cold feet, Shawn and Trini devise a plan to expedite the process. Shawn asks Topanga out himself as a ruse to make Cory jealous.

Trini does her part by tricking Cory into being her date for the same movie. The method works, and Cory ends up with Topanga by the end of the episode.

Season three represents the first instance when Cory and Topanga get back together. After breaking up with Topanga earlier in Season three, Cory discovers his inability to live without her. When Topanga wins a class trip to Disney World, Cory enlists Shawn to travel with him to Orlando to win her back. Cory pulls a series of stunts to try to gain Topanga’s attention.

Though at first, she resists, she relents to his advances at the end of the episode. They kiss in front of the waterfall and become a couple once again.

Cory and Topanga become estranged after his escapade at the ski loft with Lauren, followed by his drunken tirade with Shawn. Topanga decides to start dating around and meets someone at an art exhibit.

When he takes her out to dinner and kisses her, she “feels nothing” and determines that Cory is her soulmate. She takes Cory to the playground near their houses to officially get back together with him.

Season 7, Episode 4: No Such Thing As a Sure Thing

After Topanga calls off the wedding at the end of Season Six, Cory does everything possible to win her back. He even travels to Pittsburgh with Shawn, attempting to get her parents back together.

His efforts fail when he learns that Topanga’s father cheated on her mother. It takes a surprise visit from Topanga’s mother (at Topanga’s off-campus apartment) to convince her to get back with Cory.

Topanga finally relents and resumes their engagement with the attitude that even if the relationship one day ends, it’s essential to see it through. They end up making out at the Penbrook pep rally, which marks the final time when Cory and Topanga get back together.

2 thoughts on “When Do Cory and Topanga Get Together?”