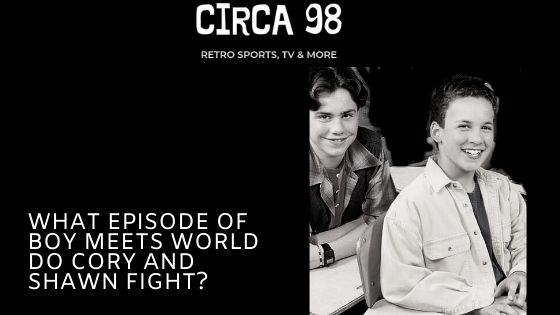 Cory and Shawn fight in the episode Pink Flamingo Kid, which occurs in Season 3. Shawn is upset that Cory plans to use incriminating footage from the trailer park to enter a student news contest. Although Shawn tries to diffuse the confrontation, Cory shoves him into the lockers.

Mr. Williams and Mr. Turner break up the fight quickly, and Eli even poses the question, “did you guys know you were fighting each other?”

Alan tells Cory that Chet lost his job and Shawn won’t get many Christmas gifts. In response, Cory decides to gift Shawn his official NBA basketball as an early Christmas gift, but Shawn throws it back in his face. He bats the ball out of Cory’s hands and goes home.

The friends make up by the end of the episode, but it’s the first instance of a near-physical confrontation between the two.

After Cory dumps Shawn as his running mate in the class presidential election, Shawn grows furious with his friend, whom he convinced to run in the first place. Also, Shawn fed Cory most of his best campaign ideas. Their qualm never turns physical, however.

Shawn and Cory both drop out of the race by the end of the episode, and Topanga takes over as president.

The Wrong Side of The Tracks (Season 2, Episode 19)

When Shawn’s date breaks their plans because of his trailer park lifestyle, Shawn decides to join Harley’s gang. Cory finds his friend’s new path upsetting and confronts Shawn to the point of grabbing his shirt. Shawn brushes him off and walks away.

Cory takes things a step further by preventing Shawn from destroying Turner’s motorcycle as his gang initiation. By the end of the episode, Turner and Cory convince Shawn to leave the gang.

We learn later in the episode that Shawn’s actions were a ruse for Cory and Topanga to get together, which ultimately works successfully.

After Cory films Shawn’s half-brother unloading stolen goods into his trailer, he decides to enter the tape into a student news contest. Shawn protests harshly, but Cory refuses to give in.

The disagreement results in a physical altercation in the John Adams High School hallway, initiated by Cory’s push of Shawn and a strike back by Shawn. Finally, Cory shoves Shawn into the locker and then to the ground, at which point Eli and Turner break up the fight.

We noted this episode as the first instance of Cory and Shawn physically fighting in our intro. But, ultimately, Shawn’s anger stems from his instinct to protect his brother Eddie Hunter from prosecution.

Shawn comes to terms with Eddie’s criminality by the end of the episode and decides that Cory is more of a family member than Eddie.

When Eric sees Shawn consoling Topanga at Chubbie’s, he alerts Cory. Furthermore, Eric physically grabs Shawn as a warning not to mess with his brother. Even though Cory breaks up Eric’s confrontation, he also shoves Shawn into the Chubbie’s wall.

Although Shawn refuses to reveal Topanga’s secret, Cory soon learns that her family is moving to Pittsburgh, which she confided in Shawn.

Cory grows suspicious of Shawn’s behavior after he joins The Centre, a cult for young people struggling with identity crises. Along with Mr. Turner, Mr. Feeny, and his parents, Cory attempts to convince Shawn to leave the cult.

It’s not until Mr. Turner’s motorcycle accident that Shawn realizes his missteps. Cory physically forces Shawn to stay in the hospital room to confront the bad feelings associated with Turner’s potential demise.

Shawn makes peace with God and denounces The Centre by the end of the episode.

The episode’s premise revolves around Cory and Shawn’s disagreements over colleges. Although they are technically fighting, the episode’s tone is comedic and light-hearted. The writers drive home the concept of Cory and Shawn as a faux couple, bickering like a marriage.

Of course, the friends make up by the end of the episode, with Topanga’s help.

After Cory convinces Shawn to express his feelings for the purse girl, Shawn throws his caution to the wind and agrees. But unfortunately, when Shawn returns the purse at Chubbie’s, he sees that its owner already has a boyfriend.

After suffering a presumed heartbreak, Shawn aggressively scolds Cory and warns him to stay out of his personal life. But, of course, we soon learn that Angela Moore is the owner of the purses’ contents.

How To Succeed in Business (Season 5, Episode 9)

Cory gets jealous of Shawn when his friend outperforms him in a work-study program. Cory remains stuck in the mailroom while Shawn advances to work on high-level ad campaigns upstairs. Cory’s work grows so porous they demote him to a janitor.

Cory grows to resent Shawn, who is typically a screw-up for succeeding in ways that Cory cannot instinctually match. But, as usual, the friends make up by the end of the episode.

Cory and Shawn get wasted following his split from Topanga. Unfortunately, Shawn’s alcoholic tendencies emerge following their experimentation. Cory scolds Shawn for refusing to stop drinking, and things get even worse when Shawn shoves Angela.

Shawn apologizes to everyone and agrees to stop drinking by the end of the episode.

Cory grows livid with Shawn when he decides to pursue a career in photography instead of going to college. Cory even exclaims that if he were Shawn’s dad, he would spank him. However, with lots of changes in Cory’s life, his temper is short, and he takes it out on everyone.

Shawn kisses Topanga for a student promotional video prompting Cory to go temporarily insane. Cory analyzes the video frame by frame and declares that his friend and fiance have deep-rooted feelings for one another. But, of course, Shawn and Topanga find the accusation hilarious.

Eventually, Angela convinces Cory that Shawn and Topanga have no mutual interest in one another romantically.

Cory forces Shawn to read one of his poems at the student union poetry reading. Although Shawn cannot get through the poem, Cory finishes it for everyone to hear, including Angela, the poem’s subject.

When Angela realizes Shawn’s unresolved feelings, she slaps Shawn in the face. Shawn grows disgusted with Cory for forcing him to open the pandora’s box.

Shawn blows off many of his best man duties before Cory and Topanga’s wedding. As Cory’s resentment grows, his frustration culminates during the ceremony. Cory calls Shawn trailer trash shortly before his best man charges at him and wrestles him to the ground.

In typical Boy Meets World fashion, they make up right after the fight, and Cory exchanges his vows with Shawn directly by his side.

After returning from his honeymoon with Topanga, Cory is forced to live in the married dorms with run-down amenities and bad plumbing. Meanwhile, Shawn and Angela live together in one of the nicest off-campus apartments.

Cory thinks Shawn doesn’t deserve his lifestyle, while Shawn thinks Cory is weak for not fixing up his dorm and taking some pride in the place. However, by the end of the episode, they both take each other’s advice.

After Shawn receives a letter from Virna Hunter detailing how she’s not his birth mother, he starts a quest to locate his biological mom. However, Cory consistently dissuades Shawn from his search, knowing it will only lead to heartache. Despite Cory’s protests, Shawn ends up disappointed.

Later in the episode, Shawn goes on a drunken binge where he disrespects everyone from Angela to Alan Matthews — who offers to adopt him. Ultimately, Shawn respectfully declines Alan’s offer but comes to peace with his identity.