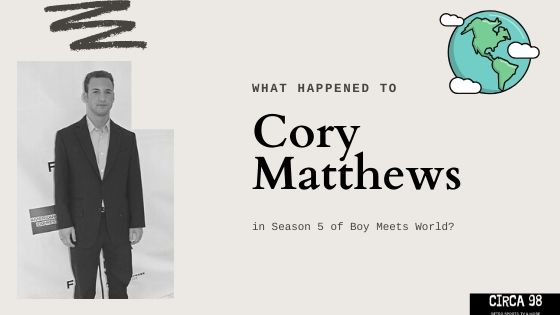 Boy Meets World Season 5 wasn’t just any season for Cory Matthews. He did things he had never done before, including dating someone besides Topanga, getting drunk, and graduating high school.

Let’s take a look at what happened to Boy Meets World’s main character in season 5.

When do Cory and Topanga Get Back Together in Season 5?

Cory and Topanga get back together in Season 5, episode 20, when Topanga realizes that Cory cannot be replaced after kissing Ricky Ferris and feeling “nothing.” She tells Angela about her experience and her intention to reunite with Cory, which she does later in the episode.

The famous TV couple officially reunites at the park while sitting on the monkey bars.

But what got us to this point? Well, Cory did a lot of things in season 5. Let’s take a look:

Cory Dated Lauren to Test His Feelings for Topanga

Cory meets a girl named Lauren at the ski lodge that his school class attends for a field trip. Cory is stuck inside because he sustained a minor injury, tripping after getting off the bus. He ends up talking all night with Lauren, and the two find a mutual spark. Things escalate when Lauren kisses Cory behind Topanga’s back.

Lauren reveals her intense feeling toward Cory in a written letter which she places in the unsecured portion of Cory’s suitcase. After accidentally dropping the envelope, Topanga finds the letter and later reads it before confronting Cory. She temporarily splits with him while pondering whether she can ever trust him.

Later, Lauren travels to Philadelphia to further explore her relationship with Cory. Topanga calls Lauren’s arrival at Chubbie’s “Strike Three” and even encourages Cory to go on a date with her to “test his feelings.” Cory agrees to go on the date, prompting Topanga to officially break up with him at the episode’s conclusion.

Cory Got Drunk With Shawn to Battle Depression

After Topanga decides she’s done with Cory because he had to test his feelings for her, he becomes depressed and emotional, to the point of Shawn warning him that nobody likes being around him anymore. Cory decides to solve this by going into his father’s liquor cabinet and stealing a pint of whiskey.

He drinks it on his way to a party, where Shawn and others notice something different about him. When Shawn gets him to admit he’s drunk, Cory pressures Shawn into drinking as well. The two end up getting very drunk and urinating on a cop car.

Ok, “assault” is a bit strong of a term, but he physically pushed Alan down after Alan refused to play a game of one on one basketball. Cory was upset that Eric and Alan always do guy stuff together, whereas he and his father just talk.

In response to this sensitivity, Alan decides to take Cory skydiving along with Eric. When Cory jumps out of the plane, Eric realizes that Alan also neglects him, but in a different way.

Where Does Cory Matthews Live in Season 5?

Cory still lived at his parent’s house and was still enrolled in John Adams High. Eric moves out to an apartment with Jack and Shawn, so Cory has the room to himself.

Despite this, he spends most of his free time away from the home, either out with Shawn and Topanga or hanging out with Shawn, Eric, and Jack, at the apartment near campus.

Who Does Cory Matthews Date in Season 5?

Cory dates Topanga and Lauren in Season 5, his first time dating another girl besides Topanga since Season 2. Lauren is a ski lodge attendant who finds a spark with Cory when he injures himself on the school field trip and is forced to stay inside and talk with Lauren.

She writes him a letter and ends up traveling to the city to try to see what they had. The entire ordeal breaks up Cory with Topanga, although they eventually reunite towards the end of the season.

Does Cory Matthews Graduate in Season 5?

Yes. Many of the top Boy Meets World characters graduate in Season 5. Cory, Shawn, Angela, Topanga, Joey, Frankie, and Minkus all graduated from John Adams High School in the 5th season. Topanga is named valedictorian but concedes her speech responsibilities to Shawn Hunter as a token of appreciation for his perspective on leaving John Adams.

Topanga quietly proposes to Cory while they are still on the graduation stage. However, Cory does not answer until the first episode of Season 6.