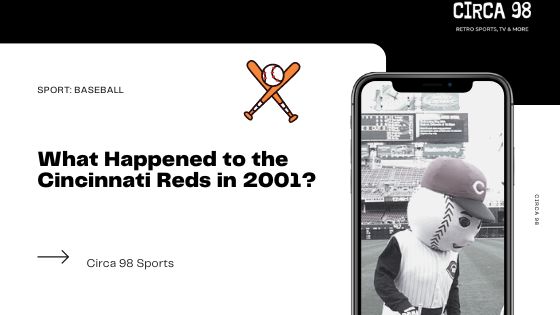 Not much went right for the 2001 Cincinnati Reds, who finished fifth in the NL Central at 66-96. However, a roster that consisted of Ken Griffey Jr. and Deion Sanders is historically notable for sports fans. Baseball purists can also appreciate other roster members like Sean Casey, Pokey Reese, Barry Larkin, Aaron Boone, Alex Ochoa, and Wilton Guerrero.

Who Managed The 2001 Cincinnati Reds?

Who Was The Best Player on the 2001 Cincinnati Reds?

Ken Griffey Jr. was clearly the best player on the 2001 Reds, where he slashed .286/.365/.533 over 111 games. It was Junior’s second season with the Reds, and though he dealt with injuries, he still produced. The only other arguable player for this spot was rookie Adam Dunn who posted a .948 OPS in 66 games.

How many great moments can there be for a team that finished the season 30 games under .500? Actually, there’s more than you’d expect because of some historical oddities that are highly noteworthy. Check out some of the best moments for the 2001 Reds:

Deion Sanders is one of the greatest athletes of all time and, like Bo Jackson, enjoyed an illustrious two-sport career in football and baseball. Like Jackson, Sanders was more known for his NFL career, but his MLB career was also quite impressive.

Sanders had been out of baseball since 1997, when he hit .273 with the Reds over 115 games. Deion decided to work his way back to the MLB by playing in AAA and eventually got his call to the majors. Deion’s return was triumphant as he went 3/3 with an HR and SB in his first game.

Though Sanders could not sustain his success in 2001 (his final MLB season), his debut proved just how unbelievable of an athlete he is.

Jose Rijo, whose elbow problems abruptly ended his outstanding career in 1995, returned to the Cincinnati Reds in 2001 as a relief pitcher. Rijo was one of the rare players to play in a game after receiving a Hall of Fame vote. Over 13 games, Rijo posted an impressive 2.12 ERA.

Rookie Adam Dunn set the NL record for most home runs by a rookie in a month when he blasted 13 long balls in the month of August. Dunn made his debut in July and ended the season with 19 home runs to go along with an impressive .946 OPS.