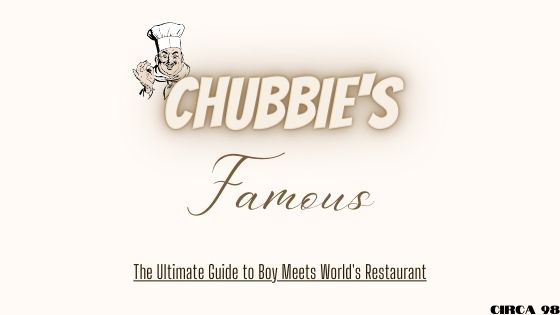 Chubbie’s Famous is a local restaurant hangout in Boy Meets World’s TV series. The restaurant first appears in Season 2 and quickly becomes the most common spot for social gatherings among the series’ main characters.

Jonathon Turner also references Chubbie during Season 3 when he tells Eli that he will ask Chubbie to order out for them. We can assume that Chubbie is friendly with regular patrons, including Jon Turner, Alan, and Amy Matthews.

Chubbie moves to Jackson Hole, Wyoming, at the end of Season 5, allowing his restaurant to be rebranded as Peg Leg Pete’s. He is never seen again on Boy Meets World.

How To Order at Chubbie’s in Boy Meets World

Chubbie demanded that first-time patrons order by stating, “Turkey Chubbie, With Everything,” regardless of what they wanted to eat. Cory teaches Linda how to order as a first-timer in the episode The Beard.

Chubbie’s Famous first appears in Season 2, Episode 5: The Uninvited. Cory enters the restaurant searching for Shawn Hunter, surrounded by a mob of popular kids, which intimidates Cory, who’d recently been invited to a geek party.

Before approaching Shawn, Cory sees Mr. Turner, who claims to be there for a Double Chubbie Cheese. Mr. Turner yells out for everyone to hand in their homework immediately to get their attention. He then tells Shawn that Cory is here, at which point Shawn gets up.

The last episode at Chubbie’s in Boy Meets World is Season 5, Episode 23: Things Change. At the beginning of the episode, Cory, Shawn, Angela, and Topanga open their Pennbrook University acceptance letters at the restaurant.

Later in the episode, Cory returns to the venue with Morgan, only to find that Chubbie’s has been re-branded to Peg Leg Pete’s with the Chubbie’s Burger, now known as the Buccaneer Burger.

The waitress, Maria, states that Chubbie moved to Jackson Hole, Wyoming, where Mr. Feeny also briefly moved at the end of Season 5.

After Topanga dumps Cory for expressing his feelings, Eli goes up to him at Chubbie’s to discuss what happened. Eli encourages Cory to get to the truth of the matter, which Topanga is concealing.

Eli’s advice proves valuable as Cory demands answers for Topanga’s breakup. As a result, Cory and Topanga get back together, thanks to the wisdom of Eli Williams and the local hangout of Chubbie’s.

After Shawn realizes the purse belongs to Angela Moore, he sees her having lunch with another student at Chubbie’s. Cory tells Shawn to look into her eyes so that he’ll know whether or not she is the one.

Shawn follows Cory’s advice and looks directly into Angela’s eyes, at which point he feels an overwhelming sense of love and infatuation. Shawn becomes so overwhelmed that he abruptly leaves Chubbie’s.

Eric plans an illegal underground rave at Chubbie’s, which makes little sense because everybody knows about it, including Principal George Feeny. Also, why would you use a burger joint as a rave venue?

According to Cory, Chubbie was on board a cruise ship, providing a window to throw the rave without his knowledge or consent. Still, everyone else knew about the supposedly “illegal” rave.

When Amy overhears Eric discussing the rave, she assumes he’s planning her and Alan’s anniversary party. When Cory and Eric catch wind of the assumption, they try to hold the rave and party simultaneously.

Eventually, Amy and Alan realize their party is a sham. Still, The Matthews brothers hatch a last-ditch plan to have Gordy, Jedidiah, and Reginald Fairfield perform their parents’ wedding song, My Girl by The Temptations. The idea works well enough to keep the party going.

When Eric lies about his college acceptance in Season 3, Alan and Amy book the backroom at Chubbie’s for a going away party. Cory gives a perplexing toast where he portrays Eric as an aloof older sibling who prioritized girls and buddies over his younger brother.

5) Frankie and Eric Duel in an Epic Pool Game

Eric tries to impress his date by accepting Frankie’s billiards challenge in Chubbie’s backroom. However, after both players fail to sink a single shot for six consecutive hours, all onlookers leave, including Eric’s date.

Finally, after Frankie leaves to attend Church, Eric sinks every pool ball with a single shot. But, of course, nobody was there to witness it, much to Eric’s dismay.