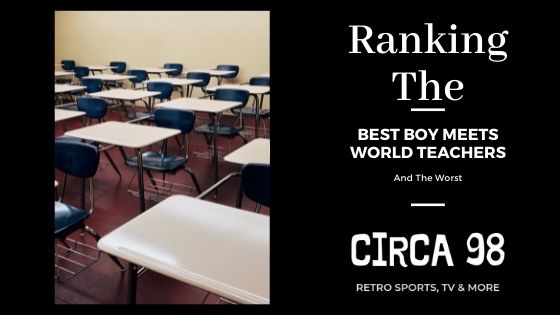 Mr. Feeny is arguably Boy Meets World’s most essential character and one that fans hold dear to their hearts. Appearing in all seven seasons, George Feeny serves as a teacher and mentor for his young students.

Mr. Feeny is a traditionalist who believes in education, discipline, and respect. While the younger characters find him authoritative in the early seasons, they grow to respect him as they mature.

By the series finale, the main characters look to George Feeny as a father figure. The series’ final scene consists of Mr. Feeny dismissing his class one last time, sending them into the next phase of their lives.

As a younger and more relatable educator, Mr. Turner represents the behavioral contrast to Mr. Feeny. He rides a motorcycle to school and assigns X-Men comic books to his English class. Who wouldn’t love this guy?

Jonathon Turner is so cool that he dates his fellow teacher Kat Tompkins, who most students find dreamfully attractive. He even scores a date with one of his student’s mothers, which may be considered unethical in some circles.

Beyond his teaching students, Mr. Turner serves as a foster parent to Shawn Hunter after his father flees the city. Unfortunately, the arrangement lasts less than one season as Chet Hunter returns to the trailer park in Season 3.

Eli provides a fresh voice to his students who benefit from his real-world experiences. Like Mr. Turner, Eli is one of the cool teachers, though that doesn’t stop him from coming down hard on slacking students.

Mr. Williams inspires Cory’s interest in film and gets Eric an internship at the local news station. Although he only appears in one season, Eli leaves a lasting impact on the characters.

Students love Ms. Tompkins because of her great personality and extraordinary beauty. She arrives at John Adams High after Mr. Feeny hires her as a Social Studies teacher.

Cory and Shawn live vicariously through Mr. Turner, dreaming about what it would be like to date the lovely Ms. Tompkins. Cory sees her phone number posted on Mr. Turner’s fridge when he stops by to drop off a paper.

We never see Kat Tompkins in a classroom setting, but we see her in the John Adams High School hallways and the cafeteria. Mostly, she speaks with Jon Turner, who she briefly dates in Season 2.

Dr. Sorrell stands out in the John Adams High School faculty because he’s the only teacher with zero ethical standards. Student-athletes love Sorrell because he lets them skip assignments and forges their grades.

The science teacher is also known to accept bribes from students and hold field trips at Atlantic City to study the science of probability. After Cory saves his classroom from a fire, Dr. Sorell treats him to a sushi lunch.

Mr. Feeny ends up firing Dr. Sorrell from John Adams High School after the teacher reveals his nefarious field trip plans in front of the principal.

Professor Michaels challenges Shawn Hunter’s mind in an Introduction to Western Philosophy class at Pennbrook University. But, of course, Shawn is not enrolled in college at the time and only attends the class to impress Jennifer.

The professor gives Shawn self-confidence when he calls him a great mind after Shawn demonstrates a natural feel for philosophical rhetoric. At this point, Shawn starts slacking on high school work to focus on philosophy.

However, Mr. Michaels later gave Shawn an F on his philosophy paper because it lacked basic essay fundamentals. Finally, Mr. Feeny convinces Shawn to refocus on the basics to support his future college education.

Ms. Chase is a younger substitute teacher who appears in Season 1 while filling in for an ill Mr. Feeny. At the time, Cory believes he caused Mr. Feeny’s illness by wishing for it just one day earlier.

Because of Feeny’s abrupt absence, Ms. Chase asks the students to fill her on the lesson plan. After Shawn lies to her about the lesson plan, she assigns the class the first 1,600 lines of Beowulf, to the class’s dismay.

Ms. Chase explains that her major at the University of Pennsylvania was epic poetry, where she wrote her dissertation on Beowulf. Later in the episode, Cory dreams of Ms. Chase becoming a lenient teacher who lets the class slack off.

During Season 2, Ms. Kelly fills in for the regular health teacher, Mr. Dubin. So naturally, Shawn takes an immediate interest in the younger and more attractive substitute.

Shawn even lies to Ms. Kelly about his age, claiming to be 24 years old and a cop. She calls him out by asking him to identify the female organ that stores the eggs. But, of course, Shawn doesn’t have a clue.

Later, Ms. Kelly goes over human reproduction, quizzing Cory on ovulation, resulting in embarrassing comments from the immature student. Later, Cory pulls Ms. Kelly aside and asks her how to get a girl to say hello.

As the Dean of Pennbrook University, Lila Bolander also serves as a professor for several classes, including Developmental Psychology. So, as it would happen, she’s the culprit for getting Mr. Feeny back into teaching.

After getting bored with retirement, Mr. Feeny enrolls in the Dean’s Developmental Psychology class with Eric, Jack, and Rachel. Unfortunately, after partnering with Rachel for a presentation, the former teacher can’t stop acting like a professor rather than a student.

While students respected Dean Bolander, they also feared her strict demeanor. However, many of her students grow to love her when she marries their mentor, Mr. Feeny, in Season 6.

In the Season 5 premiere, Shawn and Cory fantasize about their John Adams High School experience as first-time seniors. In their fantasy, two attractive female teachers make out with them in the hallways.

Later in the episode, a substitute teacher enters the classroom and identifies herself as Ms. Valentine. Shawn recognizes her from the fantasy, but she slaps him in the face when he approaches her about the dream.

As a young professor at Pennbrook university, Stuart initially endears himself to his students. Shawn even calls him more of a friend than a teacher. Additionally, he refers to him as the best teacher ever.

Stuart often fraternizes with his students in the student union and even the dorms. He stops by Topanga and Angela’s room to go over Topanga’s paper, which seems inappropriate. However, Topanga thinks nothing of it at first.

Despite his popularity, Stuart reveals himself to be a sexual predator who targets students like Topanga Lawrence. He makes a pass at Topanga in her dorm room, prompting Cory to push him through a glass door. Dean Bolander ultimately rules to suspend Cory for one day and fire Stuart.

Editors Note: Dean Bolander does not fire Stuart on-screen but states she will find out what he’s about, implying an investigation.