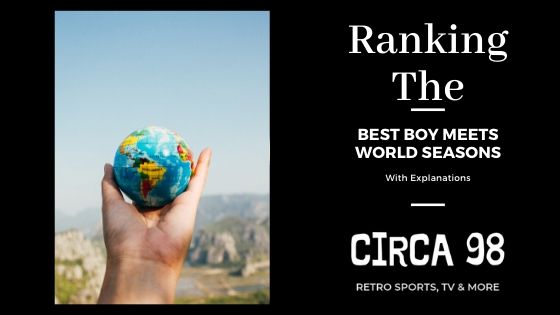 Boy Meets World aired for seven seasons which spanned from 1993-2000. Which season was the best? What about the worst? We thought it would be best to put things into context and provide explanations. Circa 98 examines the best Boy Meets World Seasons ranked 1 to 7.

With most television series, there comes a time when everything comes together, and the show hits its stride. At this point, the characters make sense; they have good chemistry, and the show’s identity fully forms.

For various reasons, Season 3 is the peak of Boy Meets World’s formative years. During this season, the show’s three main characters (Cory, Shawn, and Topanga) hit the pinnacle of their adolescence.

Season 3 also represents Eric Matthews’ apex before his decline into absurdity but after his novice pretty boy stage. The third season explores more profound elements of Eric’s character, adding a layer of nuance.

Ultimately, Season 3 encapsulates the sweet spot of converging timelines between the younger characters and their adult influences. Alan and Amy Matthews remain integral to their subordinates, but Cory, Shawn, and Topanga begin to spread their wings.

Season 2 departs significantly from the initial season, resulting in an almost entirely different show. Luckily for viewers, the departure was for the best (although the Pod Meets World hosts vehemently disagree).

Stripped away were formulaic production methods that resembled many of the sitcoms from that era, and in their place came cheaper-feeling but more authentic-seeming presentations.

Though Boy Meets World’s second season flirted with the ideals of B-movie slapstick comedy, it combined its hubris with surprisingly authentic drama and a genuine ethos that remained comfortably under-the-top.

Pod Meets World criticized the changes that occurred in Season 2, arguing that the new characters were over-the-top tropes and exhibited exaggerated qualities based on 1950s retro culture.

They also argue that replacing Minkus with other “nerd” archetypes was a disservice to the series. However, they never seem to consider how the audience would react to Minkus suffering the demeaning bullying of his replacements.

Since the audience already formed a connection with the Minkus character, it’s unlikely they would have felt comfortable with him being hit in the face with a door or physically assaulted by Frankie Stecchino.

As for the recurring cast, the 2nd season also represented a redefinition of Cory and Topanga’s relationship that would be exaggerated consistently in each succeeding season. The notion of them being lifetime soulmates was never presented in Season 1.

Despite such annoyances, Season 2 was highly entertaining and introduced viewers to series’ legends like Mr. Turner, Harley Keiner, Joey “The Rat” Epstein, and Frankie Stecchino.

Most significantly, Season 2 was Shawn Hunter’s coming out party as the principal character, giving viewers a glance directly into his complexities. Shawn’s mysteriousness spawned ongoing intrigue for the coming seasons.

Best Episodes: Breaking Up Is Really, Really Hard to Do, Career Day, Home

Despite many fans’ insistence that Season 4 produced more appealing episodes, Season 5 rewards viewers with exciting new plots. As was the case with Season 2, the 5th season represents a whole new concept.

It became apparent in the season premiere that the writers were aiming for a more mature audience, as their viewers’ interests mirrored those of their on-screen counterparts.

Season 5 introduces viewers to Angela Moore, who had never previously appeared in the series. Since she is one of the best Boy Meets World characters of all time, her presence is a welcome addition for fans.

Season 5 also introduces us to Jack Hunter, who adds a new dynamic for both Shawn (his estranged half-brother) and Eric (his new roommate).

While Season 5 is undoubtedly enjoyable, it also signifies a shift in the series’ ethos.

Just as Seasons 2-4 were dramatically separate from Season 1, Seasons 5-7 define a new series era. Except for the ever-present George Feeny, adult influences have been creatively neutered.

As a result, much of the show’s collective consciousness is handed to the coming of agers who sometimes seem ill-equipped to handle it. For example, some viewers found themselves longing for the insights of Jonathon Turner, who disappeared from the series without explanation.

Editors Note: Mr. Turner gets into a motorcycle accident at Season 4’s conclusion, but the storyline is never resolved.

While the injection of youthful energy produced more expansive storylines, the show seemed confused by its simultaneous desire to be wholesome and hip.

For example, Cory and Shawn’s drunken mishap was perhaps one of the more realistic storylines in the series’ history and felt more honest than usual for a 90s sitcom.

However, Cory’s attempts to film a Real World-style documentary about Shawn, Jack and Eric came across as forced and far less edgy than required to reach the targeted demographic.

Best Episodes: If You Can’t Be with the One You Love…, Heartbreak Cory, I Love You, Donna Karan: Part 1

Season 4 indeed transitioned Boy Meets World into the Seventeen magazine demographic by slowly phasing out adult influences. However, the results produced mixed emotions for long-time fans of the show.

Since the fourth season predates the arrivals of Angela and Jack, the series sits in something of a no-mans-land with established characters existing in an unfamiliar context.

Despite its awkwardness, Season 4 still produced several of the most memorable Boy Meets World episodes. For example, Shawn joins a cult and Cory and Topanga dance to Sweet 16 inside a WWF wrestling ring.

On the flip side, the fourth season introduces some of the most absurd storylines imaginable. Alan Matthews quits his job as grocery store manager to work full-time at a camping store. Talk about ridiculous.

Overall, Season 4 is much like the age phase of its characters, awkward, uncertain, and often nonsensical. Yet, despite its rough edges, the season does enough to keep its viewers engaged and entertained.

As Boy Meets World’s swan song, the final season benefits from the emotional goodbyes and nostalgic reflections that come with the conclusion of any long-time series.

These implicit circumstances facilitate great television, and that’s what the final episodes provide to viewers. Still, the writers deserve credit for a grand finale that satisfied its most invested loyalists and stands the test of time two decades later.

While the final taste was pleasant, more than a few low points proceeded it. Episodes like Brotherly Shove and For Love and Apartments remind you just how lousy television can be.

Luckily, such pitfalls are balanced out by all-time classic episodes, including The War, Seven The Hard Way, and Angela’s Ashes.

The Boy Meets World characters’ stories had been told by the final season, and it was time for the show to move on. Fans can look back and concede that the writers did their best to provide a satisfactory ending.

Unlike the final season, Season 6 lacked the built-in advantages of a series’ conclusion. Instead, viewers were left with increasingly unrealistic plot points and several characters of dwindling appeal.

If Season 5 was Boy Meets World’s peak, its downward turn was sudden and steep. Of course, most sitcoms deteriorate after the show’s main characters get engaged (see Fraiser), but this problem seemed to impact Boy Meets World even more harshly.

It didn’t help that the writers did nothing to supplement their main characters. Instead, Eric became a parody of himself, growing increasingly preposterous with each episode, to the point of jeopardizing the series’ legacy.

While sitcom viewers are generally flexible in suspending their disbelief, Boy Meets World’s flagrant gestures tested this notion and became a bridge too far for fans needing some sense of realism.

Despite flaws, the show remained decidedly watchable — a credit to its overall foundation and the strength of its character development.

Best Episodes: Everybody Loves Stuart, We’ll Have a Good Time Then, The Psychotic Episode

The initial season of Boy Meets World is polarizing for the show’s fans and critics. You can generally separate people into two categories, people who think it was the best season and people who believe it was the worst.

As you can tell from our rankings, Circa 98 believes it’s the worst season. Such designation confirms that Season 1 was essentially a different show than the rest of the series.

Nothing in the initial season resembles the rest of the series, including how it was filmed and written. For example, the intro sequence clearly illustrates how far removed it was from subsequent seasons.

Shawn’s character is intermittent and undefined, while Cory seems over-the-top with his theatrics. In addition, Topanga is written as an almost entirely different character than what she would become.

To its credit, the first season’s production value feels superior to the rest of the series, though its entertainment value fails to follow suit.

Subsequent creative choices regarding Cory, Shawn, and Topanga seem to align with our stance on the show’s inaugural season. We might not have six additional seasons to compare if the writers had continued down their commencing path.

Ultimately, Season 1 is the least entertaining season and the one people are least likely to go back and watch in 2023. That doesn’t make it bad; it just makes it worse.