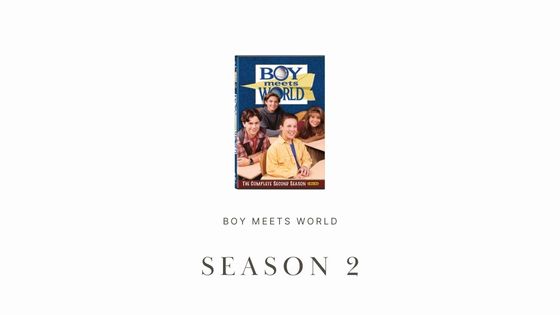 Boy Meets World Season 2 is excellent and widely beloved by fans. However, it also presents a jarring transition from Season 1. The second season differs from its predecessor stylistically and tonally, prompting some critics to lambast its departure from the wholesome and understated presentation of the initial season.

The Pod Meets World podcast has enlightened fans as to why this creative shift may have occurred. One of the series’s co-creators, April Kelly, was allegedly dismissed from the show at Season 1’s conclusion, along with much of her writing staff. As a result, the other co-creator, Micheal Jacobs, gained full creative control.

It became evident that Jacobs intended to age up the show’s characters and their accompanying storylines. Critics have highlighted the loss of a women’s perspective (April Kelly and her writers) as glaring in Season 2’s tenor. As a result, most of Season 2’s storylines are presented from an overtly masculine point of view.

While Micheal Jacobs seems difficult to work with, the on-set tension he presumably induced did not bleed through the fourth wall. Talking to the majority of Boy Meets World fans, Season 2 ranks among their favorites. At Circa 98, we wholeheartedly concur as Season 2 ranks only behind Season 3 in our top seasons.

Watch Full Episodes of Boy Meets World on Disney Plus

New characters like Mr. Turner, Chet Hunter, Harley Keiner, Frankie Stechinno, and Joey Epstein are introduced, while old characters like Stuart Minkus disappear. While Minkus’s departure is regularly criticized by fans and media, his presence at John Adams High School would have been uncomfortable.

Nevertheless, the second season’s vibe is overwhelming, as many things are happening simultaneously. Cory enters high school, Mr. Feeny becomes the new principal, and Mr. Turner joins the school faculty. It’s no surprise that the cast felt dizzy in the Season 2 premiere, as the show now barely resembled its initial version.

It’s important to remember that starting high school is an overwhelming feeling, and Season 2 accurately captures this sentiment. However, we can concede that the retro vibe of some of the new characters seems cartoonish. In fairness, exaggerating the character traits of guest stars like Harley Keiner was likely an intentional creative choice meant to encapsulate the feeling of a high school freshman entering a new world.

Later in the season, additional inconceivable storylines emerge, such as Cory and Joey wrestling in the John Adams High School gymnasium after-hours, in an event featuring Vader, Yasmine Bleeth, and Robert Goulet. It remains unclear why the writers chose to venture so far away from reality, albeit temporarily.

It’s important to outline that outlandish episodes like The Thrilla in The Phila are balanced by more realistic ones like Wrong Side of The Tracks, Career Day, and Home. In totality, Season 2 is both relatable and profound, particularly when compared to other 90s sitcoms and even modern-day television shows.

In addition, the evolution of Shawn Hunter’s character is appealing, particularly in the context of his relationship with Mr. Turner.

A lot transpires throughout Season 2, including the trio’s acclimation into high school culture (inside and outside of school), Mr. Turner’s emergence as Shawn Hunter’s caretaker, and Eric’s misadventures with dating.

Much has been made of Cory’s jump from 6th grade to high school and its implications on the show’s storyline. However, it’s understandable why the creators wanted their school set to feature all the principal characters, including Cory’s older brother, Eric.

Mr. Feeny follows his former students to John Adams High School, this time as an acting principal and teacher. Eventually, the acting pre-cursor to his principal title is removed, and he takes over as a full-time disciplinarian.

Feeny’s influence over Cory, Shawn, and Topanga grows stronger throughout Season 2, as he now holds even greater authority in the school setting. His influence also extends to the faculty, namely the “groovy” new teacher, Mr. Jonathon Turner.

Season 1 alludes to Shawn Hunter’s troubled home life, but Season 2 exponentially expands on it, adding a new layer of complexity to the series’s most appealing character.

First, we meet Shawn’s father, Chet, who decides to chase his wife, Virna, across the country at the expense of raising his son. Mr. Turner becomes a role model for Shawn and provides him with a home at season end.

Shawn’s status as a ladies’ man also strengthens during Season 2. Many female students at John Adams High School showed interest in dating him, planting the seeds of what would later become his fear of commitment.

On the bright side, the show provides Eric with a consistent friend in Jason Marsden, who appeared sparingly in Season 1 and more regularly during the second season.

Jason and Eric make a great comedy team and find themselves in various predicaments, mostly involving their schemes to date girls at John Adams High School.

Although Cory and Topanga don’t officially get together until Season 3, they kiss again in Season 2, as they did in Season 1. The show also begins to develop a reframing of their historical interactions, implying that they were soulmates from childhood (which was not suggested in Season 1).

Cory and Topanga endure a makeout party, a misunderstanding about their conduct in the high school video room, and ultimately a mutual respect for one another that leads to a formal relationship next season.

Some of the show’s critics and even its cast members have criticized Season 2 for very specific reasons. The Pod Meets World podcast featuring Rider Strong, Danielle Fishel, and Will Friedle recently recapped the Season 2 premiere, Back 2 School. The trio of stars argued that it was over-the-top and disorienting.

It’s understandable why the episode was jarring from their perspective, and they rightly frame the second season as an almost entirely different show from the initial season. If the actors who portrayed the characters felt bad about the Season 2 premiere, we should respect their point of view.

However, we would like to specifically address some of the most common Season 2 criticisms below:

“Minkus Should Have Returned for Season 2”

The podcast has repeatedly criticized the show’s decision-makers for moving on from Lee Norris, the actor who played Minkus, after Season 1. While it’s clear that Lee is a very talented actor, there were possible complications in bringing him back.

The “nerd” archetypes featured in Season 2, including one given the Minkus character’s original name, “Lemke,” are humiliated in the first episode and repeatedly throughout the remainder of the season.

While Minkus endured his share of insults in Season 1, the character maintained dignity by clapping back with intelligent quips that worked within the framework of the safer Elementary school setting.

Had Minkus entered John Adams High School, his defense mechanisms would have been rendered useless with the imminent threat of physical harm. His character would have been humiliated, perhaps to the degree that unsettled audience members who had grown to admire him.

Anthony Tyler Quinn apparently toned down his accent as the series progressed. However, as a fan of the show, Quinn’s performance in Back 2 School remains one of the best performances in Boy Meets World history.

As a consumer, there’s no over-the-top feeling that comes with Mr. Turner’s introduction. Instead, he feels like an exciting new character we want to learn more about as the episode progresses.

Mr. Turner’s east coast accent is not without warrant, as we later learn that Turner’s character originates in Connecticut later in the series.

Some have also questioned the realism of Mr. Turner’s interest in X-Men. But, in our estimation, the idea of a teacher reading X-Men is quite appealing to students of that age and era. It is not far-fetched for someone in their early 30s to read comic books.

The retro motif was clearly a choice made by the creators. However, It was less distracting to consumers than one might think. In addition, the style contributed to the tone that made Boy Meets World so appealing.

Harley, Frankie, and Joey are all fantastic characters in our estimation and provide more excitement than anything that occurred throughout Season 1.

Griff Hawkins references the retro vibe in Season 3 when telling Harley, “good luck with the whole retro thing.” While this creative choice may have thrown some, it was largely positive for the show’s consumers.

Season 1 was certainly more grounded and evoked a feeling of warmth that properly encapsulated the character’s final stages of innocence. Conversely, Season 2 had some uncomfortable tropes and felt chaotic in its initial episodes. However, what the series gave up in comfort, it acquired in quality.

Perhaps most importantly, the young cast’s acting improves significantly in the second season. Ben Savage, Rider Strong, Daniell Fishel, and Will Friedle each improve their overall acting range and offer more believable depictions of their characters.

Despite some valid criticisms, Season 2 is superior to its predecessor in entertainment value. While that notion is ultimately objective, Season 2’s fan reception confirms its widespread appeal.

Season 1’s innocence dissipates in the second season, along with Stuart Minkus, a principal character. However, the introduction of Mr. Turner, Harley Keiner, and other memorable characters more than makes up for the losses and only increases the show’s watchability.