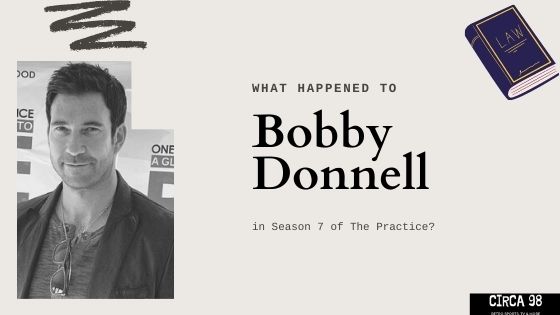 Bobby Donnell’s run as senior partner of his law firm ends in Season 7, along with his marriage to Lindsay.

It had been a dominant run for Donnell, who established himself as the top criminal defense attorney in the Boston Metro area.

Finally, however, his work takes a gradual toll on him, and he can no longer continue in his current position.

He Separates from Lindsay

Lindsay leaves Bobby, precipitating their separation. The couple has trouble communicating, but ultimately, Lindsay finds herself disillusioned with the marriage.

Their son Bobby Jr. is too young to understand what’s happening, but Lindsay moves into her mother’s house with her child. Bobby retains visitation rights on weekends.

He Has an Affair With an Old Girlfriend

After Lindsay admits to Bobby that she’s already started the process of leaving him, Bobby decides to have an affair with an old girlfriend and fellow lawyer; Sarah.

Bobby’s marriage to Lindsay was on the brink before the affair since neither felt comfortable talking through emotions and struggles.

He first rationalizes his behavior as innocent dinner and drinks between old friends. However, he soon realizes his true intentions and goes through with the affair.

He Helps Exonoarate a Former Client

Bobby gets restitution for a former client, Lewis Nyler, who spent 15 years in prison for a crime he did not commit.

Mr. Donell blames himself for the initial conviction since he assumed his client was guilty at the time.

When Bobby questions Lewis why he didn’t seek new counsel, his client explains that he knew Bobby would be motivated to atone for the initial conviction. Luckily, Lewis’s prediction turns out to be true.

He Leaves The Firm

Bobby decides to leave the firm he built at the end of Season 7. Although he’d taken the firm from a small practice to a regional powerhouse, he finds himself missing the old days.

Additionally, he appoints Eugene as the senior partner while pursuing a small practice that will allow him to take only the cases he wants. Eugene attempts to talk Bobby out of his decision, but it serves as a fruitless effort.

More About Bobby Donnell in Season 7

Where Does Bobby Donnell Live During Season 7?

Lindsay and Bobby live in the same apartment, but Lindsay and her son move out after the separation.

The apartment draws up bad memories for everyone since Lindsay killed an intruder and former client, which resulted in her temporary imprisonment. Bobby remains in the apartment, however, up until Season 7’s conclusion.

Who Does Bobby Donnell Date During Season 7?

Bobby remains married to Lindsay for the first part of Season 7. Then, however, he begins having an affair with his old girlfriend, Sarah, after Lindsay admits that she’s already started the process of leaving him.

Bobby initially rationalizes his cheating as dinner with an old friend, but Sarah exposes his unconscious thoughts of an affair. Mr. Donell eventually submits to his true intentions.

Who Are Bobby’s Best Friends In Season 7?

Bobby’s best friends are Eugene and Jimmy, though Eugene distances himself from Bobby because of the Catholic Church scandal. However, Jimmy and Bobby remain close because they are both Catholic.

Meanwhile, Rebecca remains close to Bobby since the original practice was just the two of them. Rebecca feels a strong sense of loyalty to Bobby, and they maintain an impenetrable friendship.

Why Does Bobby Donnell Leave The Practice?

Bobby leaves The Practice because his firm transformed into the type of cutthroat entity he aimed to discredit. As a child, he watched his father work as a janitor in a high-price firm and set out to create something more blue-collar.

Other factors also play a role, primarily the birth of his son Bobby Jr. and his divorce from Lindsay, a fellow firm member.

Bobby leaves because of general unhappiness with his lifestyle and career. He appoints his colleague Eugene Young as the new senior partner, though Young initially scolds Donnell for leaving.

5 thoughts on “What Happened to Bobby Donnell on Season 7 of The Practice?”