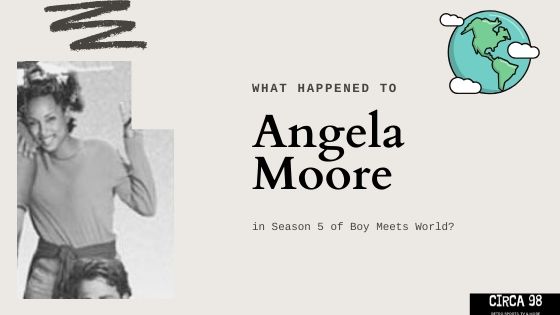 First appearing in Season 5, Angela emerges as one of the most popular Boy Meets World characters. Throughout her three seasons, Angela graduates from John Adams High School attends Penbrook University, and develops an intense relationship with Shawn Hunter.

Who is Anglea Moore?

Angela Moore is a popular Boy Meets World character who enters the series during Season 5. Aside from developing a close friendship with Topanga Lawrence, Angela is known primarily as Shawn Hunter’s soulmate.

How is Angela Introduced on Boy Meets World?

Although it was her first on-screen appearance, the other characters don’t refer to her as a new student, suggesting she’d previously been at John Adams High School.

Who Does Angela Date on Boy Meets World?

Angela starts dating Shawn in Season 5, but they split after two weeks due to Shawn’s infamous 2-week rule. However, they reconnect when Shawn develops intense feelings for her based on items found in a purse.

Initially, Shawn presumes the items belong to a different woman but later realizes that Angela borrowed the purse from a classmate. As a result, the intense feelings Shawn experiences stem from his connection with Angela.

Angela dates Shawn for most of Season 5, but the couple breaks up when they enter Penbrook University. However, Shawn intends to meet new people in college and implores Angela to follow suit.

To Shawn’s dismay, Cory plots to reunite Angela and Shawn for most of Season 6, including reading Shawn’s poem aloud in the student union. The poem Cory reads was written about Shawn’s feelings for Angela.

The poem reads as follows:

In response to hearing Shawn’s poem, Angela slaps Shawn in the face. Angela criticizes Shawn’s inability to express his feelings. Shawn lies about the origins of the poetry, claiming to have written it months earlier.

By Season 7, Shawn aggressively pursues Angela and even asks her father for permission to propose. Ultimately, Angela chooses to travel to Europe with her father rather than maintain her relationship with Shawn.

Ted, or as his coaches call him, Scooter, is a star football player for John Adams High School. Angela dates him briefly during Season 5 before Shawn expresses his true feelings for her.

The couple is seen eating at Chubbie’s during the episode, Chasing Angela. Shawn even interrupts their date while Ted is eating fries. Soon, Ted decides to go home after the conversation gets too intense.

Ron shows up with Angela in the Season 6 episode Cutting the Cord when they enter the same restaurant where Cory, Topanga, Shawn, and Kelly attend karaoke night for a double date.

Angela and Ron perform Betty Everett’s The Shoop Shoop Song (It’s In His Kiss) while Shawn looks on in anguish. Finally, Shawn attempts to match their performance with Kelly by singing Sonny & Cher’s I Got You, Babe.

Unfortunately for Shawn, he cannot finish the performance, as he remains despondent about his separation from Angela.

Who Are Angela’s Best Friends on Boy Meets World?

Angela refers to Topanga as her best friend multiple times throughout the series. The two characters often appear on-screen together both in high school and college. Angela rooms with Topanga during freshman year.

Angela meets Rachel at Pennbrook University and forms a close friendship. Rachel asks Angela to move into her apartment during Season 6 and again into her dorm room in Season 7.

Cory and Angela maintain a cordial relationship for most of the series, as each dates the other’s best friend. However, Angela offends Cory by proclaiming that they aren’t really friends. As a result, Cory works to establish a genuine friendship with Angela.

Beth is the name of the classmate whose purse Angela borrows. Although she only appears in one Boy Meets World episode, her plot point sparks Shawn and Angela’s relationship, later immortalized in pop culture as Shawngela.

Who Are Angela’s Family Members on Boy Meets World?

Angela’s father, Sargent Moore, visits Penbrook University for the ROTC program, where he recruits college students looking to join the military. Shawn completes the program as a way to impress him for Angela’s sake.

Sargent Moore returns again towards the end of Season 7 to ask his daughter to accompany him to Europe for an entire year. Shawn asks Sargent Moore to reconsider and contemplates proposing to Angela.

Although Sargent Moore gives Shawn his blessing to marry Angela, he still asks his daughter to accompany him to Europe. Angela ultimately decides to travel with her father, and Shawn chooses not to propose.

Where Does Angela Moore Live in Boy Meets World?

We never see Angela’s home during Season 5, and nobody ever mentions its precise location. However, with the benefit of hindsight, we can assume she lived with her father, Sargent Moore, a military man.

In Season 6, Angela lives in the Penbrook freshman dorms with her roommate Topanga.

Angela spends much of Season 7 in the off-campus apartment. Initially, she lives with Rachel and Topanga, but Shawn moves in when Topanga marries Cory. Later in the season, she moves into Rachel’s dorm room.

It might seem like a trivial highlight for such an integral character but Angela losing Beth’s purse sparks the series’ most appealing relationship. When Shawn examines the contents of the bag, he falls in love with her.

It takes a while for Shawn to realize that the purse items belong to Angela, but once he finds out, he feels a deep love for her. Finally, he is officially sold after Cory tells him to look into her eyes for the first time.

2) Angela Convinces Shawn to Be Himself

When Cory sets up a romantic dinner at an upscale restaurant for Shawn and Angela, Angela notices that Shawn behaves inauthentically. She confronts him about his behavior and acknowledges his missteps.

When Shawn comes clean about Cory initiating the setup, they send their food back and ask for burgers and fries instead. The couple realizes that for the relationship to work, they both must be themselves.

When Cory tries to shield Anglea from Shawn’s new dating life, she insists that Shawn’s behavior is irrelevant. When Cory replies that he’s just trying to be a friend, Angela explains that they were never really friends, to begin with.

Cory grows obsessed with Angela’s perception of him as a non-friend and works to establish a genuine friendship. At this point, Angela confides in Cory that Shawn initiated the breakup. Cory promises to keep it a secret between friends.

After Shawn and Topanga kiss for a scripted Penbrook promotional video, Cory concludes that his best friend and girlfriend desire one another. However, Angela convinces him otherwise by pushing him down and kissing him.

Afterward, Cory acknowledges that he may have exaggerated Shawn and Topanga’s mutual attraction. However, when they walk in on Cory and Angela cuddling in bed together, neither suspects anything, further driving home Angela’s point.

When Angela’s father visits Penbrook for the ROTC program, he respects Shawn’s genuine love for his daughter. Sargent Moore tells Shawn about Angela’s mother abandoning the family years before, which explains her fear of commitment.

When Shawn and Sargent Moore confront Angela together, Angela eventually sees that she is not her mother. As a result, Shawn and Angela renew their relationship and grow closer because of their shared experience.