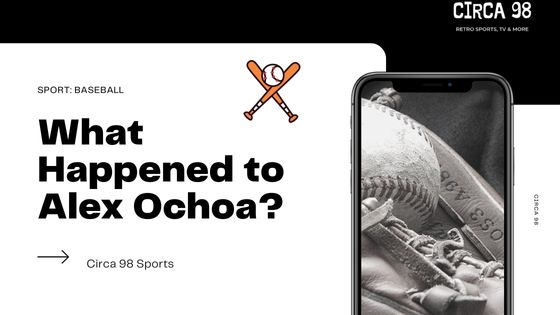 Alex Ochoa endured the worst year of his Major League career in 1998. Having been traded by The New York Mets to the Minnesota Twins in December 1997 (in exchange for Rich Becker), Ochoa was considered a high-upside player who, while coming off of a down year, was just one season removed from an excellent rookie campaign.

Ochoa failed to live up to expectations and was again traded in December of 1998 to the Milwaukee Brewers in exchange for a player to be named later, who eventually turned into Darrell Nicholas.

What Happened to Alex Ochoa After 1998?

Ochoa’s career turned around after the ’98 season. His 1999 campaign was excellent, as the Brewers used him as a platoon outfielder, and he slashed .300/.404./.466 while playing excellent defense.

The following year he was traded to Cincinnati, where he enjoyed his best pro season by slashing .316/.378/.964 over 118 games. He eventually won a World Series Championship with the Anaheim Angels in 2002, his last MLB season.

What Teams Did Alex Ochoa Play For?

Alex Ochoa Hits for The Cycle

What Position Did Alex Ochoa Play?

Ochoa played all three outfield positions (RF, CF, LF), but RF was considered his best position because of his outstanding arm strength. Many scouts considered Ochoa to have the best throwing arm in the game.

Cubs President Theo Epstein once mentioned that he wished he had converted Ochoa to a pitcher during his playing days because his arm was so strong. Epstein and Ochoa crossed paths in 2007 when Ochoa signed a minor league contract with Boston. It was too late to convert him to a pitcher by that point.

Yes, Ochoa won a World Series in 2002 with the Anaheim Angels. He was traded from Milwaukee to Anaheim near the trade deadline in exchange for Jorge Fabregas and players to be named later (who would later become Pedro Liriano and Johnny Raburn).

Although the Angels already had a set outfield, Ochoa was often used as a late-game defensive replacement for the aging Tim Salmon. You can see Ochoa in Right Field when Darin Erstad makes the series-winning catch in Center Field. It was the last professional MLB game Ochoa would play in.

Ochoa is rumored to be working with MLB agent Scott Boras who runs a baseball facility in the Miami, Florida area. In addition, Alex Ochoa appeared on The Throwing Heat Podcast with Tony Todd.